The province is home to several major archaeological sites, some of which are under threat from human activity

Krabi's reputation as a tourist destination on the Andaman coast needs no promotion. But apart from its famous beaches and islands, the province has several important archaeological sites, including the oldest site in Thailand and Asia, the Lang Rongrien Rockshelter. A recent Fine Arts Department trip to Krabi revealed the significance of these archaeological sites as well as man's impact on them. 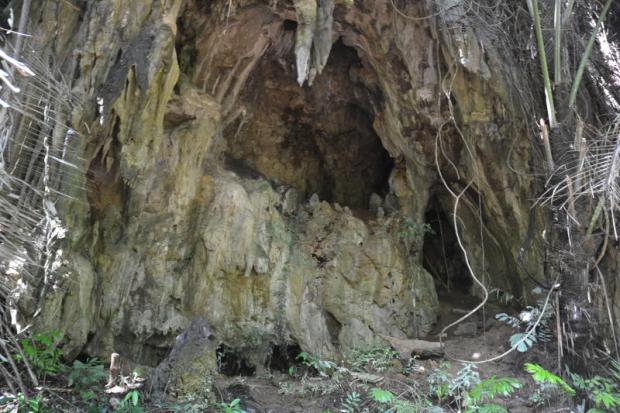 "The Lang Rongrien site was surveyed by Prof Douglas Anderson from Brown University in 1983-5. At 40,000 years old, it is the oldest site in Asia. Pieces of bones from the Neanderthals were found there," said Praphid Phongmas, senior archaeologist.

About 3km from the Lang Rongrien site is the Khao Na Wang Mi archaeological site on a range of limestone mountains. There is evidence of prehistoric humans here, with temporary shelters and graveyards 2,000-4,000 years old (New Stone Age) being found. 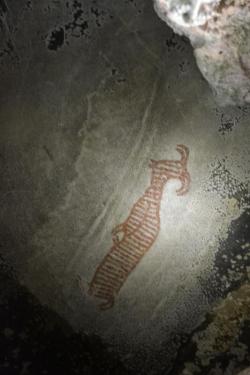 'Mr Lining', or the painting of a man with horns in Phi Hua To cave.

"Khao Na Wang Mi is from the prehistoric period. On this limestone mountain, we found caves inhabited by humans. In August 2014, we sought to register it as an ancient monument in the Royal Gazette," said Riam Pumpongpaet, director of the 15th Fine Arts Office (Phuket).

"Our team found a complete set of pottery, about 2,000 years old," he said. "Inside the cave, we found a human skeleton without a head. The woman was about 32-35 years old when she died. There are also polished stone axes."

About 40km away from Muang Krabi is Tham Phi Hua To (Big-Headed Ghost), better known by locals as "Tham Hua Kalok" (Human Skull Cave). This cave is set in a limestone mountain amid mangrove forests in Than Bok Khorani National Park.

"Phi Hua To has a total of 238 prehistoric rock paintings on its roofs and walls. In the first chamber, there are pictograph paintings, including that of a walking man with horns, as well as hand paintings," said Riam. "Two hands were painted with the free hand technique on the ceiling and one of the hands has six fingers. The second chamber has 163 human and animal figures carrying out various actions, including 25 fishes of various species, two birds and a crocodile or monitor lizard."

According to the 15th Fine Arts Office (Phuket), this cave has the largest number of rock paintings in the South. These paintings can be divided into three main categories — those in the shape of human beings and animals, those in the shape of non-human beings and those which look like hands and feet. Black, red, yellow and brown colours were used. 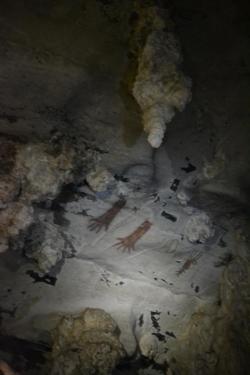 These cave paintings are of immense archaeological value. They can be regarded as convincing evidence that around 3,000 years ago there was a prehistoric community on the coast of the Andaman Sea, which relied on natural resources in this area for food and shelter.

According to the provincial tourism office, the most important painting in the cave is Khun Lai Sen (Mr Lining), the picture of a man with horns above the entrance. It reflects ancient beliefs about respecting the power of animals. The predator in this painting looks similar to a tiger. This belief is related to Ancient Egypt, which respected several kinds of animals — such as hawks, lions, hyenas, snakes and crocodiles — as gods.

Unfortunately, the southern part of the Khao Na Wang Mi mountain has been a rock blasting concession zone, although the Fine Arts Department and local villagers have sought legal protection for the site. The mountain is part of the Na Fai Mai Mountain Range, a watershed area.

"The rock blasting concession began in 2004 and when it expired 10% of the mountain was damaged. Today, Fine Arts officials and activists are trying to protect the site. We do not know whether the province will renew the concession or not," said Riam.

"Since tourism started to boom, it has become hard to cover up bad things. More tourist arrivals have scared bad entrepreneurs. Local people have seen the importance of cultural preservation," said Niwat Wattanayommanaporn, adviser to the Krabi Culture Council and a leading activist trying to protect Khao Na Wang Mi. 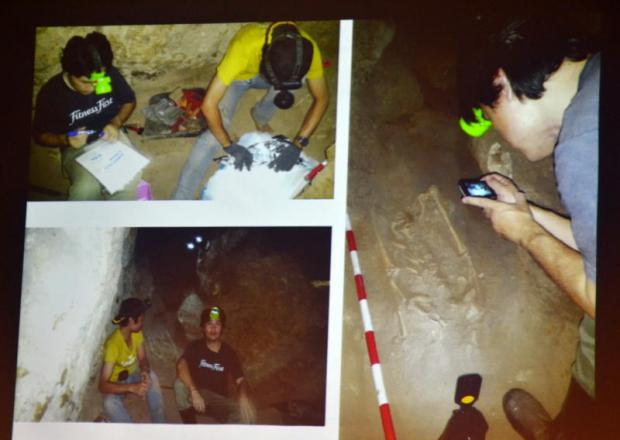 A human skeleton was found in a cave at Khao Na Wang Mi mountain. 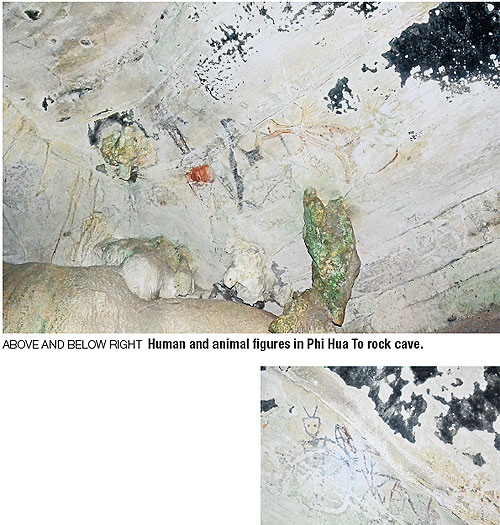 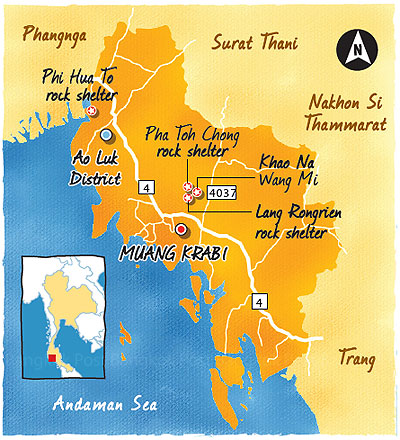