Khlong Phadung Krung Kasem is likely to become one of Bangkok's major transportation routes once again due to government support, and this may also benefit tourism. Building of the canal was commissioned by King Rama IV in 1851 to serve as the outer city moat. It runs in parallel with the first and second tiers of the city moat — Khlong Khumuang Doem and Khlong Rob Krung. 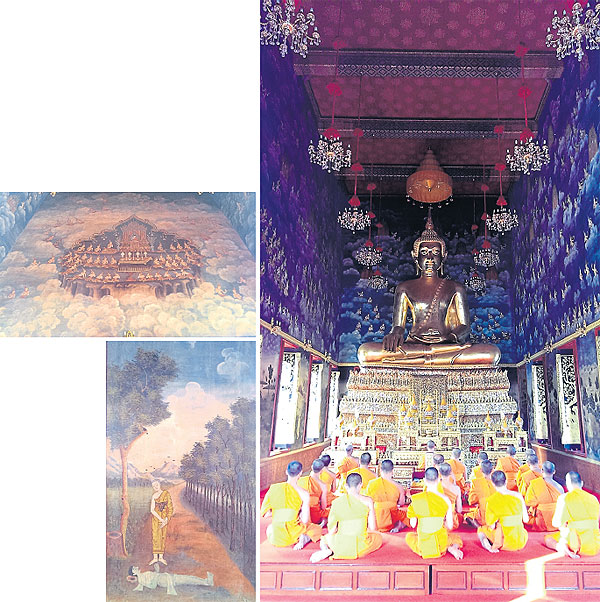 Wat Thewarat Kunchorn was a civil temple built during the Ayutthaya period and called Wat Samor Khraeng, or Thamor Khraeng. The word Thamor is a Khmer word meaning stone. In the reign of King Rama IV, the temple was renamed after the name of Prince Phitakdeves, who restored it. Its ordination hall houses the principal Buddha statue, Phra Phutthadevaraj Patimakorn, which is in the posture of subduing the Mara. Made in the Dvaravati period, it consists of metal and is covered with gold lacquer. On the interior walls are beautiful murals including the gathering of the Deva (guardian spirits), the Lord Buddha’s previous life as Phra Suvarnasam and monks looking at dead bodies. Behind the principal Buddha statue is the painting of this temple in the past before this ordination hall was constructed. Phra Vihara (prayer hall) enshrines nine Buddha statues of nine periods.

"This canal was dug with the aim of expanding the city," said Rapeepat Ketkosol, an official at Bangkok Metropolitan Administration's (BMA) tourism division. According to him, the canal is about 6km long. It was 3m deep initially, but grew shallower over time. It is now just over 2m deep.

On April 1 this year, Prime Minister Prayut Chan-o-cha ordered the BMA to seek to develop Khlong Phadung Krung Kasem as a transportation and tourism route.

"I believe tourists will come to this canal because the prime minister and related cabinet members surveyed it and plan transportation and tourism," said Rapeepat.

The proposed new route will be linked to Khlong Mahanak and Khlong Bang Kapi, as well as the Chao Phraya expressboat at Thewet Pier. It can be connected with the subway system at Hua Lamphong MRT station and the BTS National Stadium station using the free shuttle service at Kasat Suek Bridge.

On a recent BMA boat tour on this canal from Hua Lamphong pier to Thewet, a group of 40 Thais learnt about historical sites en route. The first interesting site is Bangkok Railway Station, or Hua Lamphong. The station was officially opened by King Rama VI on June 25, 1916. It boasts Italian renaissance architecture and resembles Frankfurt Central Station in Germany.

Travelling further on the boat, you will soon reach Noppawong Bridge. On the west side of the canal is Saipanya School, the former palace of Prince Sai Snidvong. Next is Debsirin School and Wat Thep Sirintharawat, where one of the city's eight forts, Pom Phrap Sattru Phai, once stood. This temple was dedicated by King Rama V to his mother Queen Debsirindra. On the east side is the State Railway of Thailand headquarters, with simple yet classic buildings reflecting the prudent use of money in the 1930s during the Great Depression.

After passing the Kasat Suek Bridge, you will soon reach Mahanak fruit market and Bobae, one of Bangkok's largest textile wholesale markets.

"The name Bobae comes from the word bongbeng, derived from the loud noises made by people of all races coming to buy and fight for used clothes during World War II," he added.

Next is a junction where Khlong Phadung Krung Kasem meets Khlong Mahanak, leading to Khlong Ong Ang to the west, and Khlong Bang Kapi, or Khlong Saen Saeb, to the east.

Next is the Nang Loeng area, where you can see the 115-year-old Talat Nang Loeng Market, a hub of good food and once an entertainment paradise.

After Thewakam Borirak Bridge is Wat Somanas to the west and then Ladawan Palace, or the Red Palace, which is now the head office of the Crown Property Bureau, to the east. Ladawan Palace was commissioned by King Rama V as a gift for one of his sons Prince Yugala Dighambara, the Prince of Lopburi.

Opposite is Kurusapa (the council of Thai teachers), the Education Ministry where Chandra Kasem Palace stood. The palace was destined for Crown Prince Maha Vajiravudh, but was still under construction when he became King Rama VI.

After passing Makkhawan Rangsan Bridge, you will see Wat Makut Kasattariyaram on the left and then reach the Thewet area, with Wat Noranart to the west and the 600-year-old Wat Thewarat Kunchorn and Thewet Market to the east. Near Wat Noranart is Thewes Palace of the Kitiyakara family.

"There are so many historical places and several cultural communities alongside this canal. At the initial stage, a transportation link will be formed and this route will be introduced for tourists to travel. Transportation and tourism can go together," added Rapeepat. 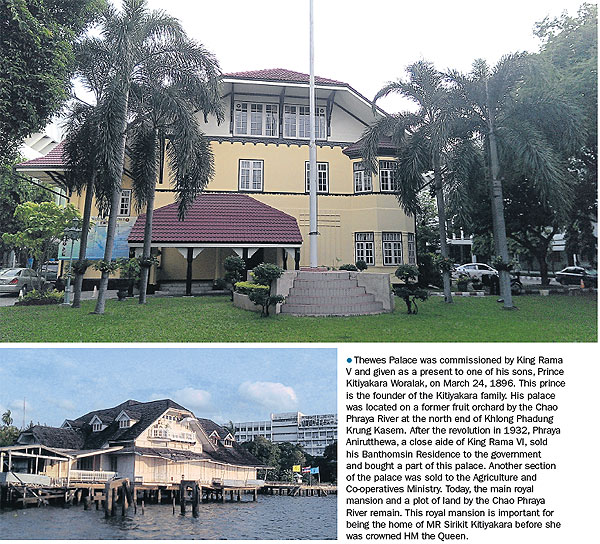 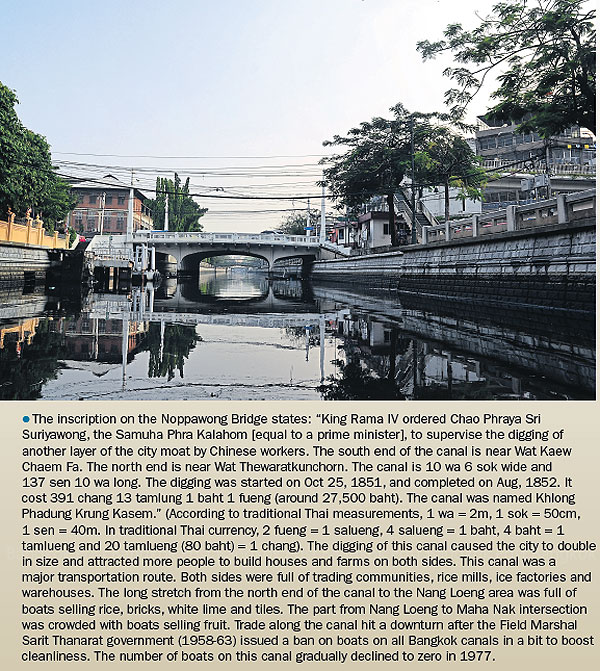 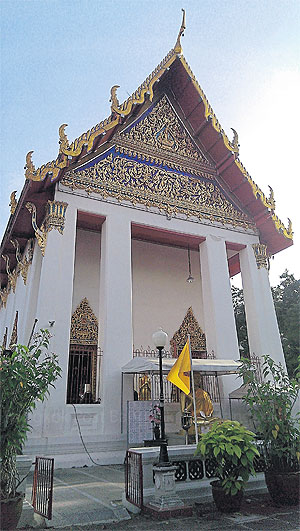 Wat Noranart Sunthrikaram was built in the reign of King Rama II and restored during the reign of King Rama V. That king later made it a royal temple and gave it the name Wat Noranart Sunthrikaram in 1875. The traditional-style ordination hall’s principal Buddha statue is in the posture of conquering the Mara. The prayer hall blends Thai and Chinese art, decorated by two lion sculptures — the symbol of the Jotikasathira family — facing each other on the front gable. This temple was restored by the founder of this family — Phraya Noranartphakdee (Phraya Choduek Rajasesthi), or Thien Jotikasathira. 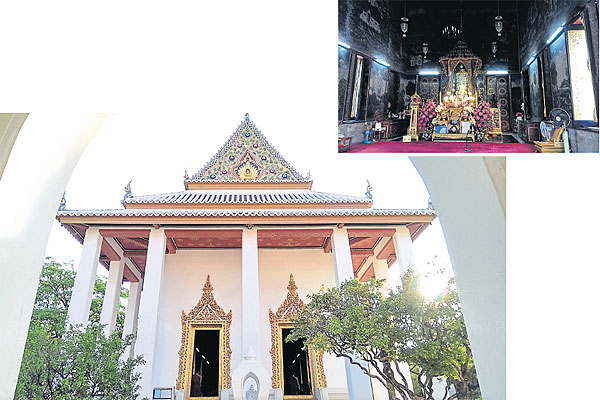 Wat Somanas Ratchaworawihan was commissioned by King Rama IV in 1853 in the early part of his reign and dedicated to his late queen Queen Somanas Vadhanavadi (1834-51). Phra Vihara (prayer hall) has stunning mural paintings depicting King Rama II’s writings I-Nao, with the blend of dhamma and the way of life in the Fourth Reign. The interior walls of the ordination hall sport the mural paintings of various meditation methods of Buddhist monks. 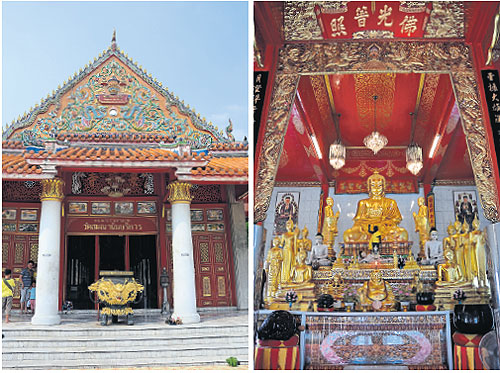 Wat Yuan Saphan Khao, or Wat Samananamborihan, was built during the reign of King Rama V in the Chinese and Vietnamese style, with a big courtyard. The principal Buddha statue is accompanied by the statues of the Lord Buddha’s disciples, Phra Anonda and Phra Maha Kassapa. Also in this hall is a portrait of the Vietnamese emperor Gia Long, or Nguyên Phúc Ánh, known by the Siamese as Ong Chiang Sue. He had fled a coup in Hue, sought refuge in Siam and later seized back the throne and made Hue the capital city of Vietnam in 1802.

There are markets on both sides of Sam Sen Road near Khlong Phadung Krung Kasem. After the end of trading by boat, rice warehouses were turned into markets. The market was expanded from stalls to commercial buildings on land near Wat Thewarat Kunchorn. Though this market’s official name is Thewarat Market, it is better known as Thewet Market. This big market is famous for the wholesale and retail trade of rice, fresh and dried food, chilli paste and many other kinds of goods. Nearby is Thewet Plant Market, opposite Wat Noranart.