published : 8 May 2015 at 10:35
writer: New York Times
A man attempts to photograph a butterfly in a butterfly garden at Singapore Changi airport in this 2013 file photo. As major airports around the world scramble to brand themselves as luxury entities rather than mere transportation centres, some have adopted a star-ranking system, like hotels. (New York Times photo)

As major airports around the world scramble to brand themselves as luxury entities rather than mere transportation centres, some have adopted a star-ranking system, like hotels. It was inevitable.

Munich Airport, calling itself "Bavaria's gateway to the world," boasts that it has become "Europe's first five-star airport." The five-star distinction was awarded in mid-March to the German airport and four other international airports by the London air-travel research firm Skytrax, based on surveys completed by more than 13 million fliers in 2014.

Modern airports positioning themselves in a firmament usually occupied by stylish hotels is an indication of how far the concept of airport-as-brand has come in the past 25 years. What used to be utilitarian -- a place to grab a magazine, a candy bar or a beer and get on or off a plane -- has become far more elaborate, with amenities at many airports, including art galleries, interior gardens, theatres, mall-like concourses filled with shops and restaurants and, at least in some foreign airports, exotic experiences.

"Have you flown through the Kuala Lumpur airport?" said Sharon Schweitzer, a business traveller who lectures on intercultural communication. "When you get to that airport, you have this experience of going into a rain-forest-like setting. The Singapore airport is another example. They have a butterfly garden, a sunflower garden, an area where children can paint; they have movie theatres."

Business travellers who fly mostly to airports in the United States might be amazed by this array of attractions -- Incheon International Airport in Seoul even has a 300-metre golf driving range. But across the board, in the United States and abroad, seasoned travellers generally concur that airports have improved significantly in the past quarter-century, as facilities have expanded and terminals have been modernised to generate local revenue.

And that presents a paradox, with airports becoming more attractive and comfortable for all, even as airline service and amenities have steadily deteriorated in recent years, except for those lucky passengers flying in the highest priced luxury seats in the front of the plane on international routes. 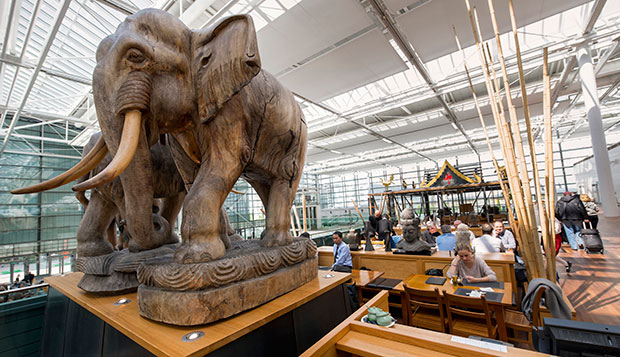 A Thai restaurant with an elephant statue at the Munich airport in Germany. (New York Times photo)

Local governmental entities typically manage airports as showcases to bolster regional economic growth. But airlines fly planes strictly in ways and along the routes dictated by the bottom line.

Since 2008, airports in the United States have committed US$52 billion to capital improvement projects, many still underway. Globally, $385 billion worth of projects are in progress, led by China and the Middle East, according to estimates by Capa Centre for Aviation, a research organisation.

Surveys of global travellers always show that most top-rated airports are in Asia. Of the top five on the Skytrax 2015 list of the world's best 100 airports, Singapore Changi is No. 1, followed by Seoul Incheon, Munich, Hong Kong International and Tokyo Haneda International. Airports in the United States do not appear in the top 25, although the Cincinnati, Denver and San Francisco airports are in the top 40.

The airport industry says it needs more federal tax money for capital improvements to keep pace with those at foreign airports, especially to attract more international business travel, which accounts for 15% of all arriving air passengers in the United States. In a speech last year, Kevin M. Burke, the president of the trade group Airports Council International, North America, said airports in the United States were "at the breaking point" in struggling to finance the $75.5 billion in estimated capital improvements needed through 2019. 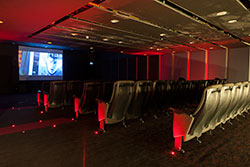 One of the theatres in a 24-hour cinema at Singapore Changi airport. (New York Times photo)

Business-travel groups also oppose increasing the fee, saying that airports are already awash in revenue from retailing, food, parking, landing fees and other sources, while enjoying a robustly growing customer base as air travel rebounds this spring to what the airline trade group, Airlines for America, says is the highest level since 2007. "Business travellers want to see more enhancements and improvements for the current charges before they will consider new ones," said Greeley Koch, the executive director of the Association of Corporate Travel Executives.

A 2013 study by the domestic airline trade group showed the importance of revenue from nonairline sources. In 2012, airports' nonaeronautical revenue, including parking and ground transportation, rental cars, retail and food and beverage, was $7.56 billion, compared with $9.31 billion from landing fees and other charges paid by airlines.

While airports in the United States might have a long way to go before someone bestows a five-star rating on them, they have developed extensive amenities as air travel has boomed and terminals have become more crowded with passengers, many of them awaiting connecting flights.

"Airports are now like the Mall of America," said William Johnson, a business traveller who was sipping a cappuccino recently at a trendy restaurant at Los Angeles International Airport.

Tracy Sear said that when she started as a flight attendant in 1968, "air travel was a lot more expensive, dollar for dollar, and most airports were not all that convenient even for things like having a meal."

On the other hand, added Sear, who is now a flight attendant with American Airlines, "In general, people spent a lot less time in an airport than they do now. And airports definitely were not retail hubs like they are now."

Ralph Nader, the consumer activist and a former presidential candidate, said he had been flying since 1950, and the shopping environment was the biggest change he had seen in airports. He was not pleased about this, incidentally.

"They've become malls," Mr Nader said. "You have to search hard even to find basic airport information through this blizzard of commercialism and color and merchandise and signs. And except for some airports like Midway in Chicago, where you can still get a great Greek lemon soup at a locally owned Greek restaurant in the terminal, they're all chain stores. In general, the family-owned small businesses are shut out of airports all over the country." 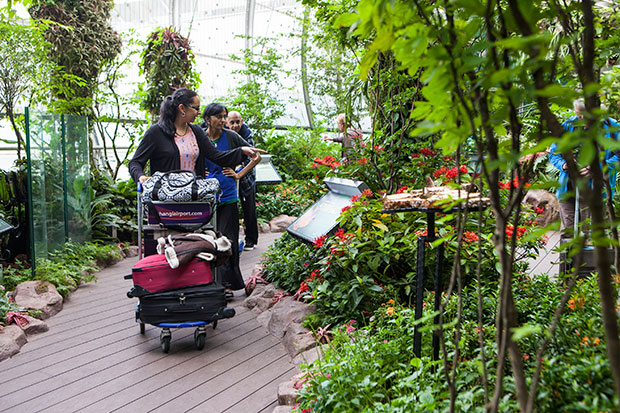 Sara Nelson, the international president of the Association of Flight Attendants, said, "Airport facilities have definitely gotten better." Yet, Nelson, a flight attendant since 1996 with United Airlines, added "we still have a long way to go" to bring airport standards up to levels being set by major modern international airports.

One look at any major airport during peak hours shows how much room for improvement remains.

Many top-ranked major foreign airports have services that cater to passengers on long layovers, like sleeping pods, self-enclosed cocoons for napping or relaxing that can be rented by the hour. Only a few airports in the United States have similar amenities, notably the tiny private rooms with beds in terminal concourses at the airports in Atlanta, Philadelphia and Dallas operated by a company called Minute Suites.

Ms Sear is among the frequent travellers dismayed by the common sight in major airports of exhausted people often sprawled on floors as others gingerly step around them.

"It used to be you only saw that when people were, like, stuck at the airport for three days or something," she said.

Ms Schweitzer, the world-traveling communications specialist, is the author of Access to Asia, a guide to building business relationships and understanding etiquette in Asia. She has strong feelings about sleeping in airports.

"Those sleep pods, the little sleep cabins you see at some foreign airports, they're certainly appropriate, and private," she said. "I would never ever sleep in an airport otherwise. Not my style. And if you can't find a seat because of the crowds and you're resting on the floor, someone will just come along and run you over with a vacuum cleaner."

Mr Nader offered another reason, pods aside, he finds sleep elusive in major US airports.

"One thing that's very different from the old days is nonstop noise," he said. "Blaring announcements, people shouting at you like Big Brother, day and night. Who could sleep through that?"

An escape to another world