On a squeaky bicycle, a lean woman spins her way leisurely down the streets of Thakhek, a Lao town by the Mekong River. From the attire and Vietnamese-style conical hat she's wearing, it's likely she's of different descent from many she shares the road with. Lao women, in contrast, tend to wear the pha sin traditional long skirts, even when riding motorcycles. 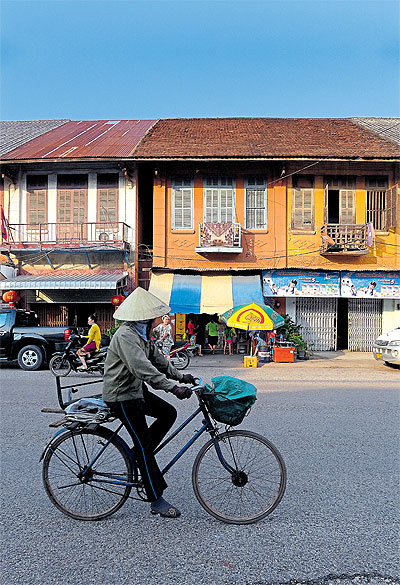 On the other side of the roadway stands a row of old, yet brightly coloured, two-storied shophouses glowing in the warm rays of the late afternoon sun. The facades of some of the buildings, however, were blocked from view by vinyl awnings and commercial banners of both Lao and Thai consumer goods. The latter were transported here from Nakhon Phanom on the Thai side of the river via the third Thai-Lao Friendship Bridge. Although the advertisements as well as public signage were written in Lao, for many Thai visitors, they are not difficult to read, thanks to the fact that our languages came from the same root. 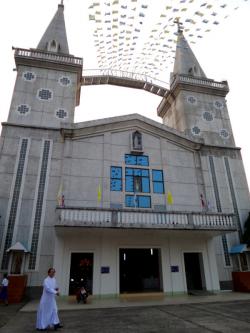 St Anna's Church in Nakhon Phanom, one of the landmarks on the riverside.

This is quite an ordinary scene in Thakhek and it goes to show various aspects of the trans-border relationships among the people in these parts. Aside from shared cultures and history, trades and upgraded transportation facilities, there is still another thing that can even further tighten the ties between both sides of the mighty Mekong: tourism.

"The border areas flanking this part of the Mekong are blessed with a wealth of historical and cultural heritage that could be developed as tourist attractions," said Prachuap Janmouen of Si Sa Ket Rajabhat University. Prachuap recently led a research team, sponsored by Thailand Research Fund, to conduct an extensive study and survey on the potential for tourism along the international river, focusing on the 600km-plus section that forms the natural boundary between northeastern Thailand and central Laos.

The team divided this stretch of the Mekong in accordance to its geographic characteristics, local beliefs and tourism potential into three zones.

The first, which they dubbed as "Naga Mantra", begins on the Thai side from Chiang Khan in Loei and extends downstream passing Nong Khai to Bung Kan. In this zone, there are many rapids, islands and sand banks in the river, which led to the locals' long-held belief about the nagas (mythical serpents). Apart from the famous bang fai phya nak — the annual "phenomenon" where mysterious fireballs shoot randomly from various spots in the river into the air on the final night of Buddhist Lent — there are also many other festivals, traditions and folklores related to the nagas. 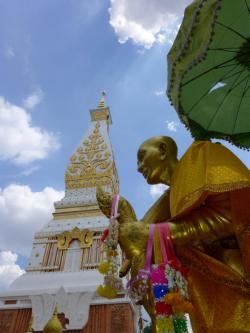 Phra That Phanom, located 52km south of the downtown area of Nakhon Phanom, is one of Thailand's most sacred religious monuments. For over a thousand years, it has been highly revered by not just Thai but also Lao people. This statue, which stands on the northern side of the grand stupa, was erected in honour of Than Phra Khru Khi Hom, a monk from Vientiane who led 3,000 men from the other side of the river to help in a major restoration of the stupa, which took place from 1690 to 1692. Nakhon Phanom has several well-known stupas, each of which has been assigned a different day of the week. Phra That Phanom, for example, is for those born on Sunday.

The next zone, which Nakhon Phanom and Thakhek are a part of, has been named the "Pilgrimage Route", because there are many well-known religious sites located on both banks of the river. Some stupas, like Thailand's Phra That Phanom and Phra That Tha Uthen and That Sikhottabong in Khammouane and That Ing Hang in Savannakhet in Laos, are highly revered by people on both sides of the border. The Church of St Anna in the town of Nakhon Phanom, meanwhile, represents not just the openness of the locals, but also the historical relationship between Thai and Vietnamese Christians.

Further south is the other zone called "Geo Park". That's because this part, which covers Amnat Charoen and Ubon Ratchathani, boasts many spectacular rock formations, both in the river, like the popular Sam Phan Bok, and on its banks like Pha Taem National Park.

Lining both Thai and Lao sides of the Mekong in all these zones are interesting villages and towns of different sizes. Many of them, like Nakhon Phanom and Thakhek, are located opposite their counterparts on the other side of the river.

"Each day, a lot of local people cross the border to work, visit relatives and do some shopping, both by ferry services and via the friendship bridges," said Prachuap. "However, the exchange of tourists within the region is still low. But, with the rich resources that we have, there is great potential to attract more visitors, both from the neighbouring countries and from other parts of the world."

For that to happen, the team's 318-page study points out how the government sectors of both Thailand and Laos need to actively join in.

"Rules and regulations for boats, for example, need to be amended," the researcher said, adding that Thai boats are currently not legally allowed to moor on the Lao bank.

The study also suggests that immigration processes and fees should be more tourist-friendly and there should be more facilities and support allocated to tourist-related businesses, better training for hospitality personnel and development of new attractions, such as museums. There are a number of other studies sponsored by the Thailand Research Fund that look into tourism-related issues in the northeastern provinces along the Mekong. They too can be used to guide Thailand in the right direction. After all, development based on knowledge is the smartest way to go.

Nakhon Phanom can be reached by various means, but, of course, the most convenient would be by air. Nok Air and Air Asia fly daily between Bangkok and the northeastern province.

To get to Thakhek from Nakhon Phanom, foreign visitors must cross the Mekong via the third Thai-Lao Friendship Bridge. Public buses travel between the bus terminals of Nakhon Phanom and Khammouane many times a day. Thai and Lao people also have a ferry as another option, which is more convenient because the boat pier on each side is in the downtown area. 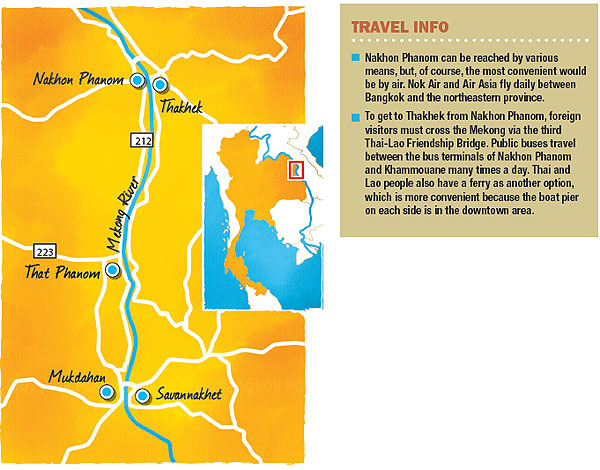 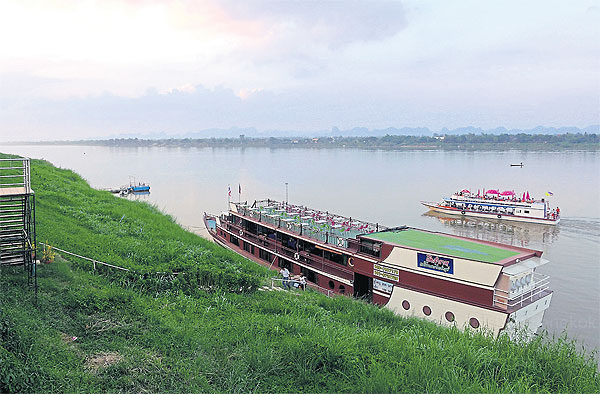 Where the Mekong runs between Thailand’s Nakhon Phanom province and Laos’ Khammouane province, of which Thakhek is the main town, the river is wide and virtually free of navigation obstacles. That, coupled with the view of Nakhon Phanom’s old town on this side of the river, and of the beautiful mountain on the other side, has resulted in the recent emergence of cruise businesses in the area. Currently, Nakhon Phanom has two daily cruise services, one run by the municipality and the other, which uses a much larger boat named Mekong Paradise Cruise, by a private company. The two vessels, both of which can be seen in the photo, have food and drinks for sale on board. 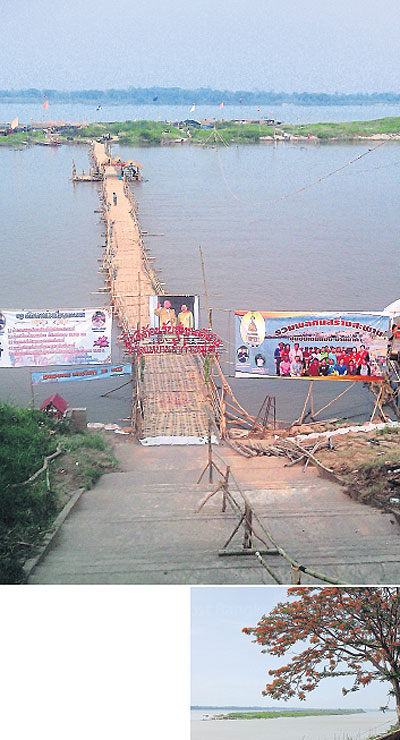 Hat Hae of That Phanom district is the only island on the Mekong that is occupied by Thai people, as a result of peaceful negotiations between villagers on both sides of the river. During the Songkran Festival, the island is crowded with throngs of revellers who come to enjoy a swim on its beaches. To facilitate the visitors, the locals annually join forces to build a 286m-long makeshift bridge linking the Thai bank to the island. 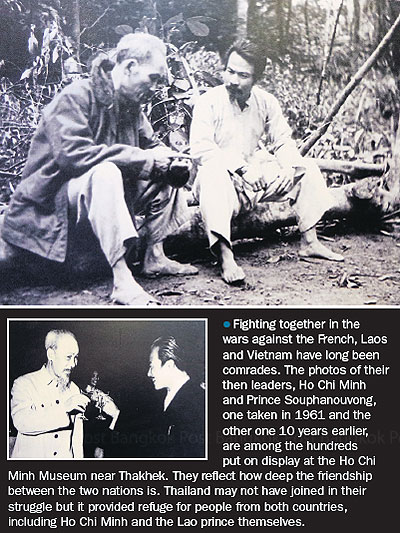 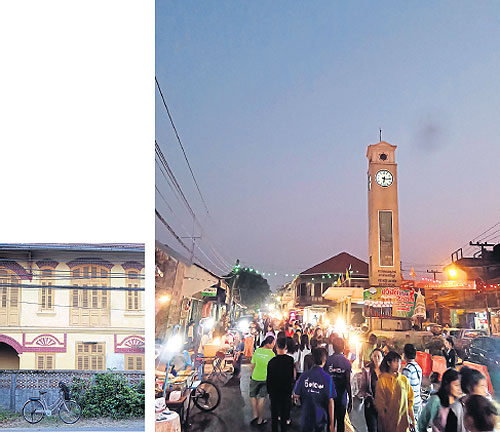 The Vietnamese Memorial Clock Tower was a token of friendship from Vietnamese immigrants to the people of Nakhon Phanom when many of them moved back to their homeland in 1960, a few years after the French were forced out of Vietnam by the Viet Minh. The clock tower is located at a road junction that becomes part of a bustling Walking Street every Friday and Saturday evening. During the day, visitors can walk or ride rental bikes around the town and take photos of its many colonial-style buildings.

Small-scale fishermen, both Thai and Lao, are a common sight on the Mekong. Despite the dams in China blocking the upper parts of the river, the Mekong is still home to many species of fish. The international river not only serves as a source of livelihood for the people living in countries along its banks, it also inspires their arts and cultures. 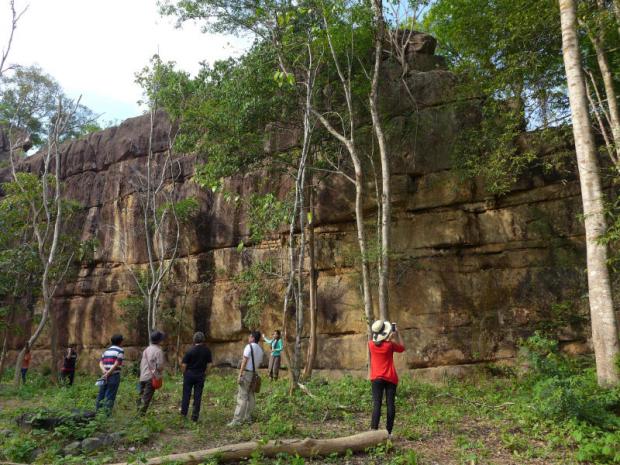 The Giant Wall of Khammouane is one of the numerous natural sites that could become major tourist draws in this part of Laos. 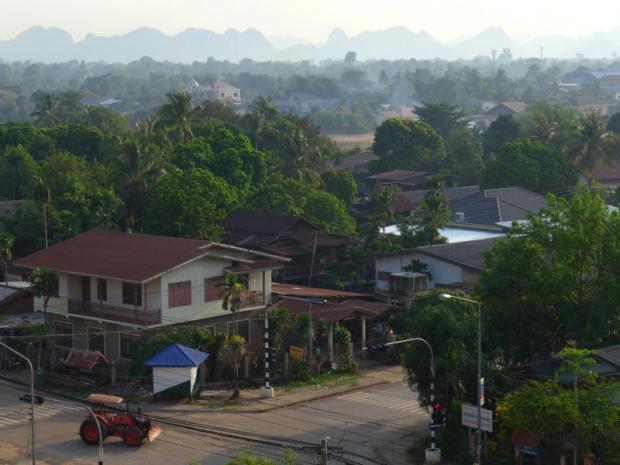 Thakhek is the capital of the Khammouane province in Laos. The charm of the town lies in its peacefulness, its friendly people and the beautiful buildings from colonial times. From Thakhek, travellers can take Route 12 toward the border with Vietnam, which is just 140km away. 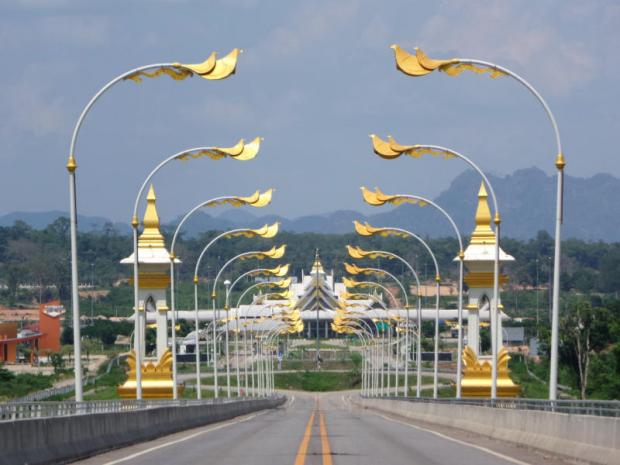