published : 18 Aug 2015 at 20:42
writer: AFP
Business owners and traders from around the Ratchaprasong intersection pay their respects to deities at the Erawan shrine in this 2010 file photo. (Bangkok Post photo)

BANGKOK - The Bangkok shrine hit by a bomb blast Monday was originally built to appease superstitious construction workers and morphed into a popular attraction that typifies the kingdom's unusual blend of Hindu and Buddhist traditions. 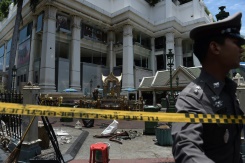 Few visitors who make their way to Bangkok's main shopping mall district fail to notice the Erawan Shrine which sits at the foot of a luxury hotel on one of the city's busiest intersections.

The smell of sandalwood incense and the jangle of temple music wafts above the din from the city's gridlocked streets providing a welcome respite for both devotees and curious onlookers.

The shrine itself was erected in 1956 after a string of mishaps befell the construction of a government owned luxury hotel.

An astrologer recommended building a shrine to the four-faced Hindu god Brahma, known locally as Phra Phrom. Local legend states that once the shrine went up, the problems besetting workers stopped and devotees have flocked there ever since.

Such shrines are not unusual in Buddhist majority Thailand, a nation which has forged a syncretic relationship with animist and Hindu traditions.

Shrines to the Hindu gods Ganesha and Shiva can be found just a few hundred metres away from the Erawan while Thais have their own version of the Ramayana epic -- the Ramakien.

In recent years Chinese devotees in particular have flocked to the shrine, fuelled by the belief that prayers and donations there will bring them good luck and fortune.

The fervour with which locals treat the shrine is so great that in 2006 a mentally ill man who attacked the statue of Brahma with a hammer was beaten to death by an angry mob.

The shrine has also been witness to key recent moments in Thailand's febrile political history thanks to its location at the Ratchaprasong intersection.

The key crossing has been taken over by both sides of Thailand's political divide at various times during recent street protests.

In 2010 much the intersection was the scene of a military crackdown against Red Shirt supporters loyal to ousted premier Thaksin Shinawatra.

When the crackdown finished a large mall opposite the shrine was gutted by fire.

Five years on the shrine has once more been witness to violence in the capital.