The mountains are calling
Travel

The mountains are calling

The drive along Highway 12 is dotted with breathtaking views, making it the picture-perfect getaway from the hustle and bustle of Bangkok

Driving along the highway, I look out of the window and see the rolling hills that spread across the horizon. Endless lush vegetable plantations carpet the landscape that is also dotted with houses and colourful resorts. It is a picture perfect route that might make motorists feel as if they are driving through something out of a postcard.

The afternoon Sun shows up for a while before fading into the white fog. The high elevation and humidity from the lush national parks blankets the area with fog, particularly after the rain falls, making the landscape appear as if it is dreamily floating.

Afraid that I might just miss such a spectacular view, I reduce my speed automatically so that I can enjoy riding through this magnificent scenery.

I am driving along Highway 12, the highway, in my opinion, which takes you through some of the most stunning scenery of Thailand.

The most beautiful section of the highway, in terms of scenery, is the road between Lom Sak and Ban Khek Noi, on the northern part of Phetchabun’s Khao Kho district. Stretching over 790km, the highway runs from the westernmost city, Mae Sot, in Tak Province, to Muang district of Mukdahan province at the eastern edge.

It is part of the East-West Corridor. The government wants to make it a significant transport route that runs across the country. Once formerly a narrow lane, the road has now been expanded dramatically, making it an ideal road for travellers.

A few decades ago, this area was a battle zone between the Thai army and the Communist Party of Thailand. A significant amount of deforestation swept the mountains. From a handful of Hmong villages and private ranches, Khao Kho and its comfortable mountain breeze gradually developed into a tourist destination. 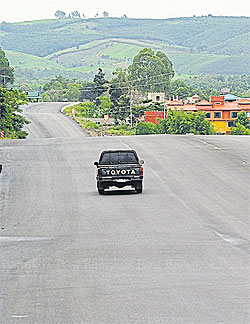 The good news for tourists in search of mountain breezes and the dreamy landscapes of rolling hills is that, due to the development of road conditions, tourists from Bangkok can now reach Highway 12 within a five-hour drive.

I am surprised by the number of new resorts, outlets and attractions that are dotted around the area. The number of coffee houses I spotted were staggering.

“It began some five years ago, when more resorts and coffee houses started to mushroom along this route,” says Sittichai Nuchailek, owner of the themed shop, Route 12. He was among the very first operators who started a business on this route some seven years ago.

“Around 20 years ago, tourists packed the Khao Kho area, which is a bit off this highway, only during long weekends like New Year’s Eve. They came here in particular for the winter breeze. I found Highway 12 had over 2,000 vehicles running through it a day, yet they never stopped because there was nothing to stop for.

“Motorists said to me that it was difficult to find any coffee shops on this route. So I saw a potential for the beginnings of a good business. If I could get interest from at least 10% of the motorists passing along this route, I would surely have a big group of customers.”

He thus set up his roadside outlet and called his shop Route 12, like the famous Route 66 in the US. Decorated under the theme of an American roadside outlet, it comprises coffee shops, a diner, retro souvenir outlets and accommodation. The terrace has a wide mountainous view which always seems to attract motorists to stop by for photo opportunities.

“With vintage gas pumps set at the front as a decorative item, my first customer drove in and asked for gas,” he laughs.

Getting away from the highway, I drive on narrow lanes off Highway 12 and find even more shops and resorts tucked away in the hills, overlooking the picturesque rolling hill views of Phetchabun. Roughly, there are nearly 500 resorts situated in the area.

Fog lingers on the mountains’ tops. I see tourists driving slowly through beautiful lanes, enjoying the selection of fresh vegetables picked from farms, chilling out with brewed coffee on terraces that open out onto mountain views, or scooting around in search of attractions, such as the war museum or beautiful temples.

It is a refreshing and relaxing atmosphere that makes one forget about Bangkok — which is now so overcrowded — for a while at least. 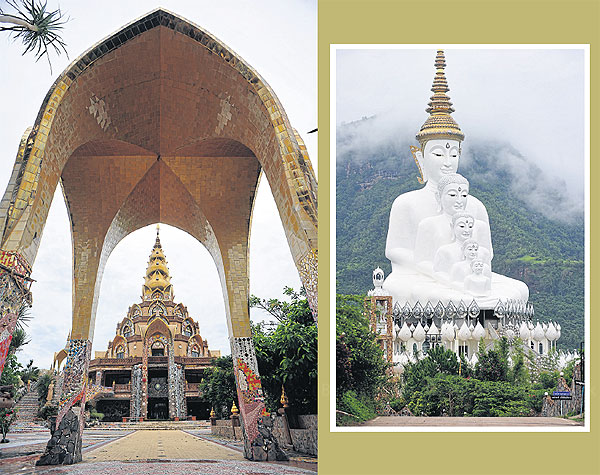 Surrounded by high mountains just a stone’s throw away from Highway 12, the temple of Phra That Pha Son Kaeo is a tourist attraction due to its beautiful architecture. It is actually a retreat where Buddhists come for tranquility to practise dhamma. So, please remember to keep quiet when visiting. 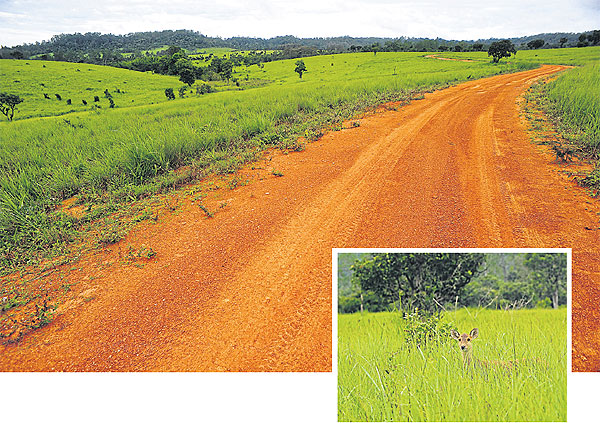 Some 20km off Highway 12 is Thung Salaeng Luang National Park, which features vast meadows and a pine forest. Serenity and untouched nature make it a nice place for campers.

A reddish stream plunges 3m into the pool below at the Sidit Waterfall in Khao Kho National Park. The waterfall once was a stronghold for Communist’s troops. A watermill as well as huts from the war era remain in the area. 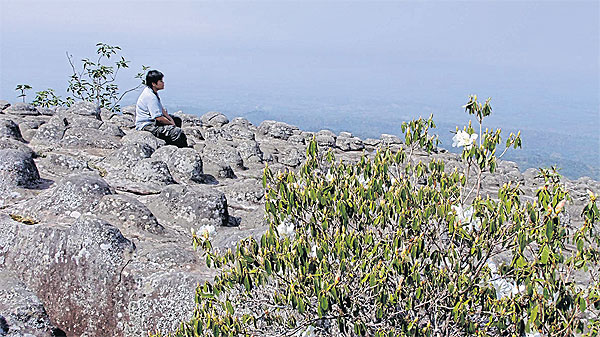 Phu Hin Rong Kla National Park is a major attraction tourists can easily explore. The park landscape is generally dominated by a mountainous terrain. The rock terrain of Lan Hin Poom is a nice viewpoint for the park. 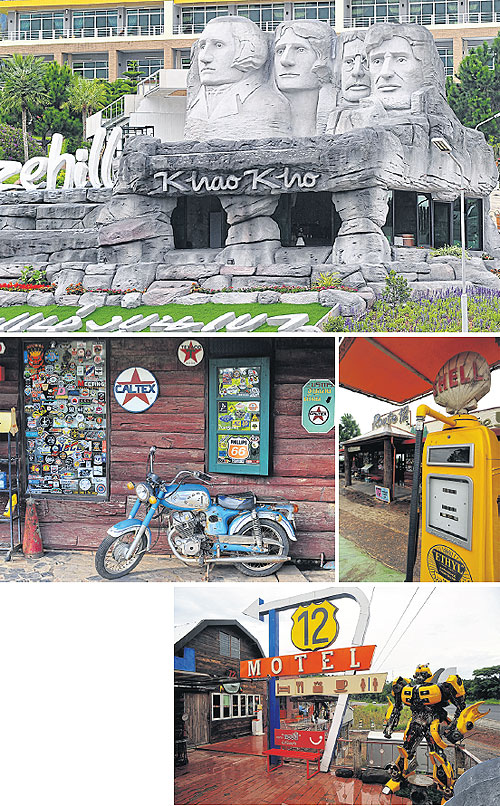 Themed shops and restaurants are trying their best to interest motorists. Do not be surprised if you come across replica sculptures of the Mount Rushmore National Memorial, Moai statues and even Transformer robots. 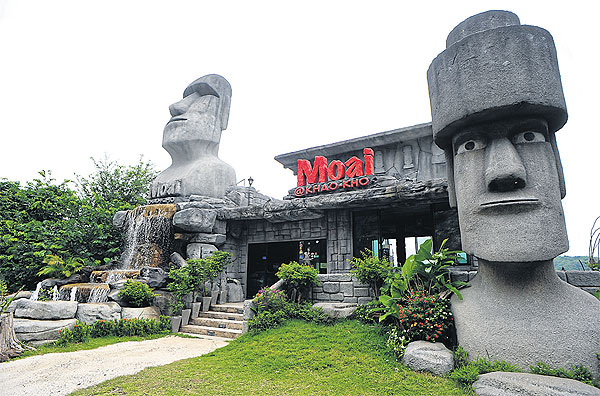 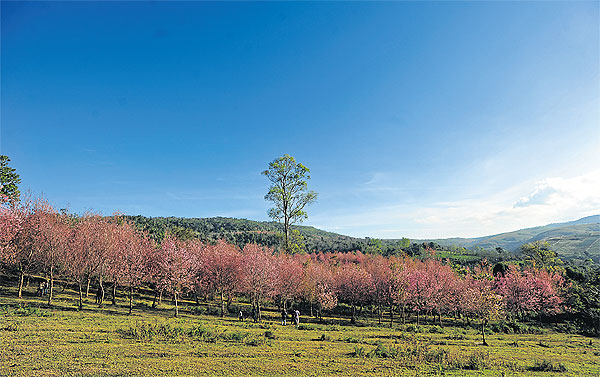 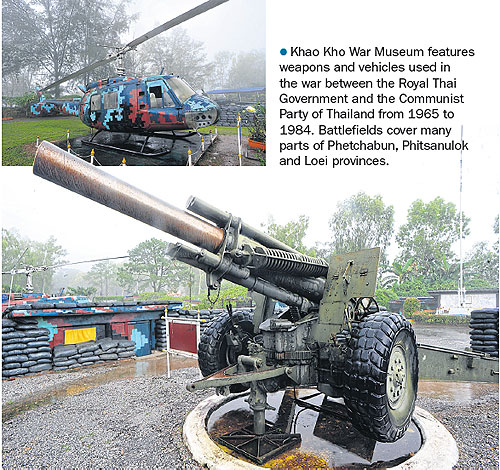 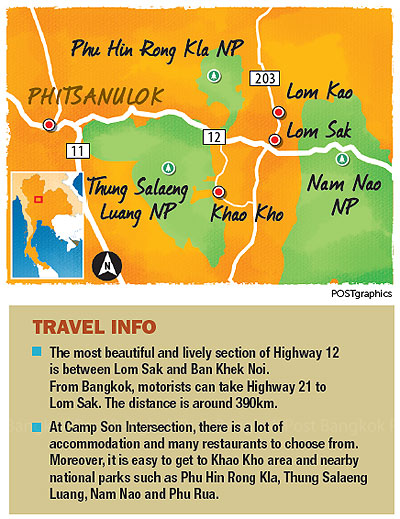