To the Mekong and beyond
Travel

To the Mekong and beyond

Mukdahan, a town on the northeastern border between Thailand and Laos, has charm that will soon put it on every tourist's map

published : 19 Nov 2015 at 03:30
newspaper section: Life
writer: Pongpet Mekloy
From the lookout point on Phu Manorom, the first hill south of Mukdahan, you can get a good view of the entire town, the Mekong River, the Friendship Bridge and Savannakhet on the other side. Due to its proximity to the town, the hill is popular among local people who come here to exercise.

The mighty Mekong marks the border between Thailand's northeastern region and Laos. With the second Thai-Lao Friendship Bridge providing a land link since 2006, the town of Mukdahan has served as a convenient gateway from Thailand to the Lao town of Savannakhet on the other side of the river.

Both Mukdahan and Savannakhet are on the East-West Economic Corridor (EWEC) which extends westwards via Mae Sot, the Thai border town in Tak province which is also included in this special series, to Myanmar's Mawlamyine; and eastward through the Lao-Vietnamese border to Danang, linking the Andaman Sea to the South China Sea.

For a lot of locals in the three countries along the eastern section of the EWEC, especially residents of Mukdahan and Savannakhet, the route is a part of their normal lives.

"It's common for Lao people to cross the border, either via the bridge or the ferry to shop for consumer goods in Mukdahan. Things are cheaper on this side," said Sajja Wongkittithorn, president of Mukdahan Tourism Industry Association. "Those who drive also make sure they have their gas tank refilled before crossing back."

Not counting the gamblers who come to Mukdahan to cross the Mekong to go to the casino on the Lao side, the number of Thai tourists to this northeastern border town is still small. A reason for that could be the fact that it does not have an airport. With the Special Economic Zone designation, the town residents have had high hopes that Mukdahan will finally have an airport just like Nakhon Phanom, its neighbour to the north. However, according to Sajja, several months have passed and there has been no tangible progress on the matter.

Even though the new status has not brought much change to Mukdahan, except for rising land prices, there have been delightful developments in terms of local administration and the private sector. New hotels and resorts are popping up, some of them stylish and charming, especially those located by the Mekong. Public facilities, like those at the scenic lookout point on Manorom Hill, have been improved. A bicycle lane from the town to the nearby Phu Pha Thoep National Park is near completion. The Night Market near the Provincial Hall serves as another popular venue for shoppers, apart from the long-famous Indochina Market on the river front. There is even a water park.

Of course, to make the most of your trip to Mukdahan, you must also cross the Mekong to Savannakhet, Laos' second largest city after Vientiane. Actually, the town's official name is Kaysone Phomvihane, after the former president, but Savannakhet, which is actually the name of the province, is more familiar to both Lao and Thai people.

If you're done exploring the colonial heritage of Savannakhet and still have a couple of days to spare, you can continue your journey in one of two directions.

The first is to go 250km eastward to cross the border into Vietnam and visit destinations such as the port city of Danang, the old capital of Hue and the ancient town of Hoi An; the last two boast sites that are included in Unesco's World Heritages list.

"Before you reach those well known places, you can also drop by in Quang Tri. It's rich with history, especially with regards to the Vietnam War, but there may not be as many tourist facilities," Sajja advised.

The other option is to stay in Laos and head north to Thakhek, another town by the Mekong about 94km away. Like Savannakhet, Thakhek still has well preserved buildings from colonial times. But that's not all, as the forest-covered mountains around the town are also home to wonderful natural sites. From Thakhek, if you do not want to return to Savannakhet, you can cross the Mekong back to Thailand via the third Thai-Lao Friendship Bridge and spend at least another day in Nakhon Phanom, which is included in the second phase of the Special Economic Zone project.

Of course, you're never in Nakhon Phanom province unless you visit Phra That Phanom, the most highly revered Buddhist monument in the Northeast. However, the grand stupa is not located in Nakhon Phanom town but in another district named after it. Since the town of That Phanom is about halfway between Nakhon Phanom and Mukdahan, your route becomes a complete loop if you end it in Mukdahan.

"It's not easy to convince people to come for holidays on this part of the border," said Sajja. "But Mukdahan has its own charm. Combine that with the nearby destinations on both sides of the Mekong and beyond and I believe it's just a matter of time before this gateway town becomes prominent on the tourist map." 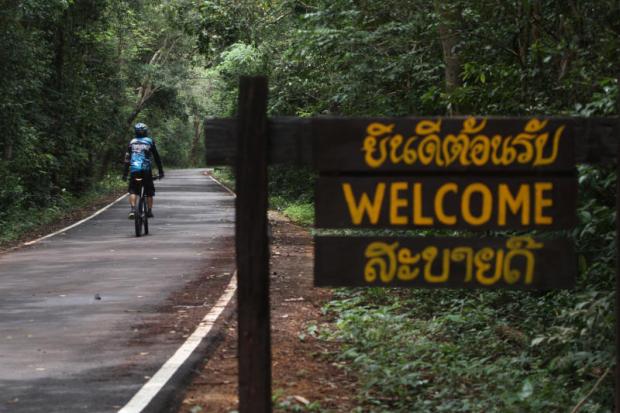 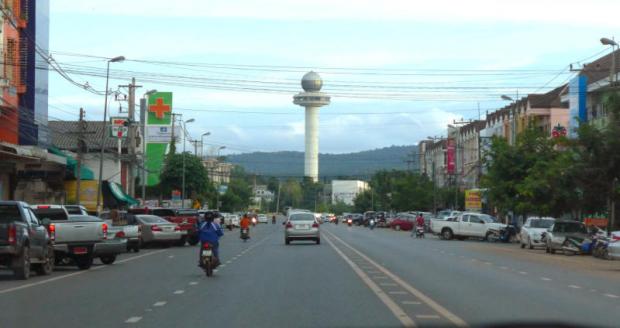 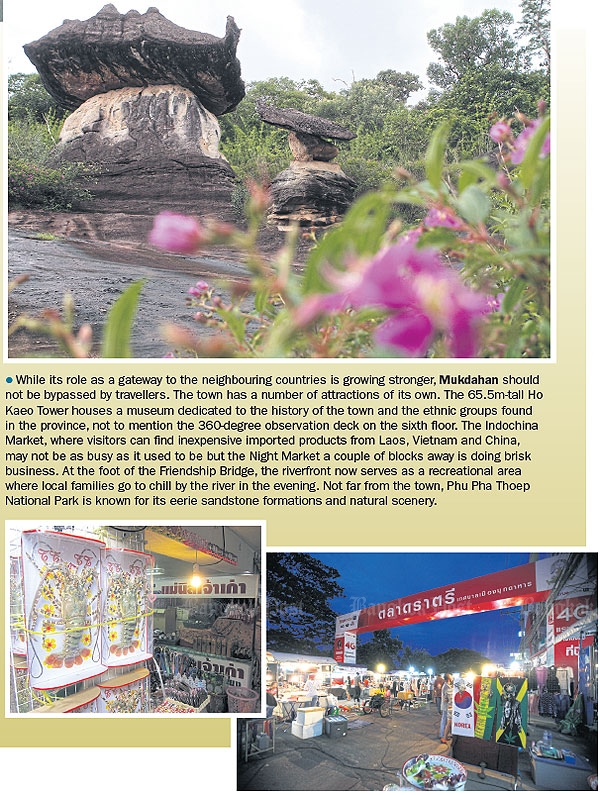 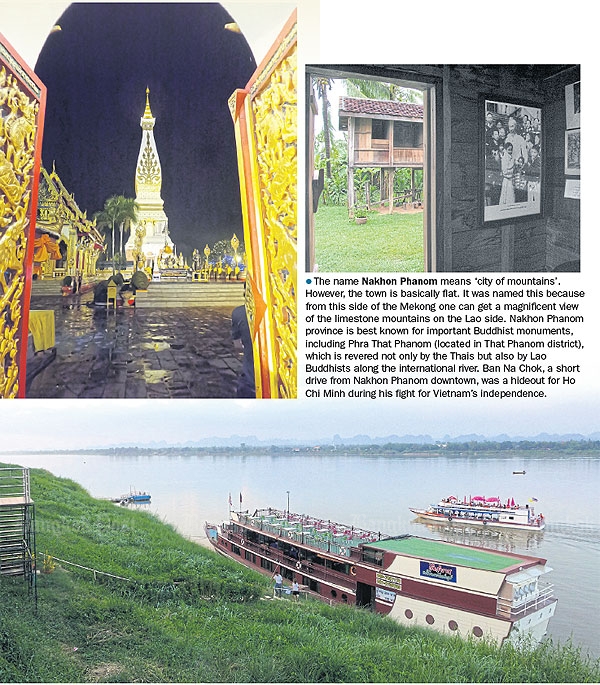 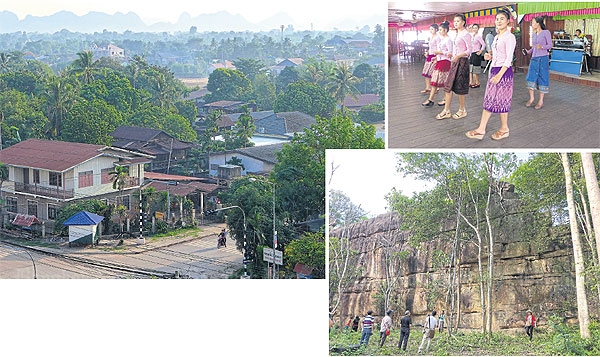 The Lao town of Thakhek sits by the Mekong opposite Thailand’s Nakhon Phanom. Smaller and more peaceful than Savannakhet, Thakhek has also preserved several colonial buildings. Like Savannakhet, it can be connected to Vietnam but via a different, more mountainous route. With the wilderness not so far away, Thakhek is a good base for nature and adventure lovers. Those who are interested in the local culture should try joining the Lao people during their favourite Paslop dancing, which often takes place at parties and at certain restaurants. 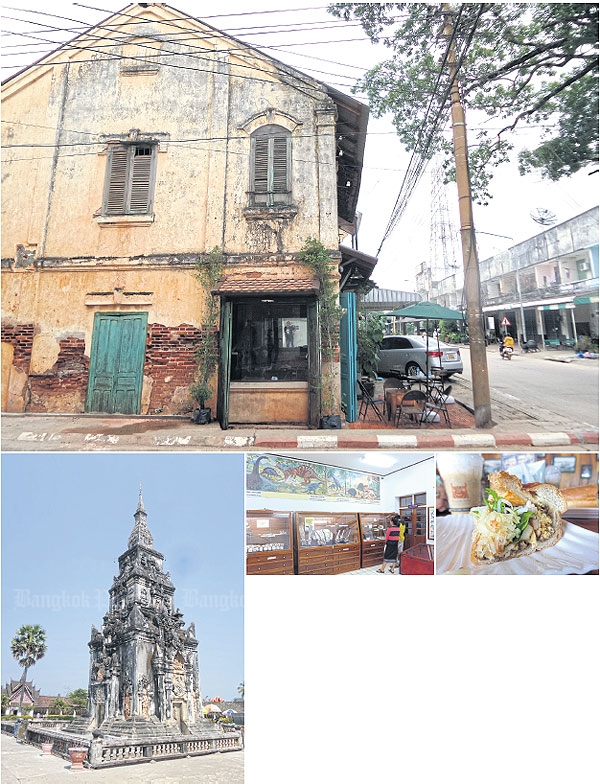 Savannakhet was an important town during French rule (1893-1953) and it remains so today. The old part of the town near the river still has much architectural heritage dating to the colonial times. The building seen in the picture is a famous photo spot for Thai tourists. It used to be abandoned but recently a group of young entrepreneurs had its interior renovated and turned the place into a stylish café. Savannakhet people take pride in the fact that their province was once home to dinosaurs, so much so that they have huge sculptures of the prehistoric reptiles put up at the town’s main traffic circle. To learn more about the town’s palaeontological past, don’t forget to visit its fossil museum. For devout Buddhists, a place not to be missed is That Ing Hang, Savannakhet’s most revered stupa. It is just a short drive out of town. Foodies should also try khao jee pate (Lao sandwich) and pho noodle. Just ask the locals where you can get some good ones nearby. 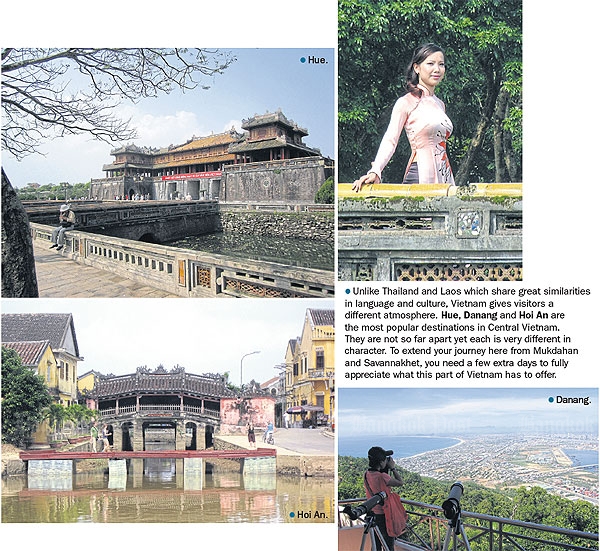 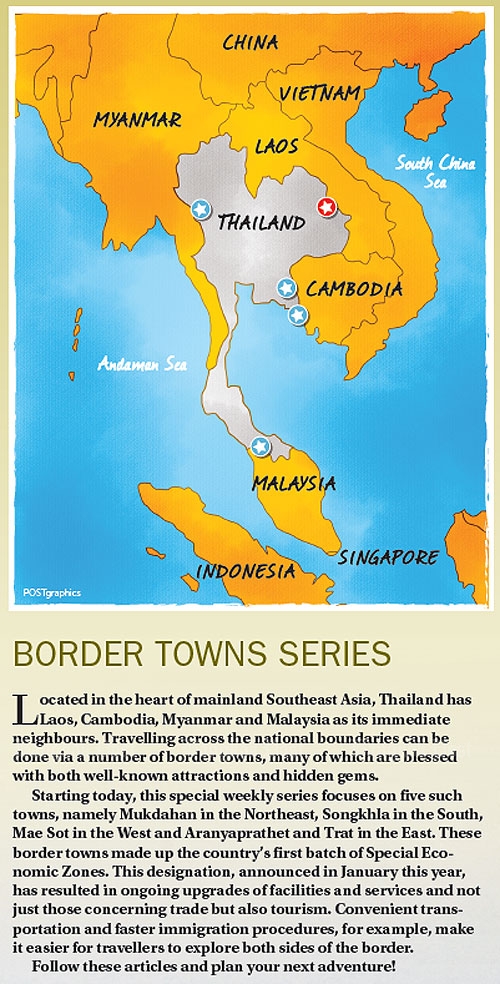 - Mukdahan is 642km from Bangkok. You can get there by car or by bus. Alternatively, you can catch a plane to Nakhon Phanom to the north or Ubon Ratchathani to the south and take a public van or a taxi from there. Nakhon Phanom is about 100km from Mukdahan. Ubon Ratchathani is 30km further but has more flights available. If you're really in a hurry, you can fly to Savannakhet and cross the river to Mukdahan. But it costs a lot more.

- Thai and Lao nationals have two choices of crossing the Mekong, the Friendship Bridge and the ferry. Those who do not drive prefer the second choice because the pier on either side is located in the heart of the town. People of other nationalities are required to use the bridge and go through the full immigration process, but this does not take too much time.

- For those who do not have their own vehicle and do not wish to take the ferry, an international bus service to Savannakhet is available from the Mukdahan bus terminal. In Savannakhet, you can find buses to Hue in Vietnam as well as Thakhek and other destinations in Laos.

- Hiring a private van with a chauffeur who can drive on both left- and right-lane traffic is the most convenient way to travel. Local tour agencies can not only help you find such vans but can also help you with the immigration process. Thai vans (2,800 baht a day, petrol not included) can travel in Laos but cannot enter Vietnam. Lao vans (4,800 baht a day, inclusive of petrol) can take you through all the three countries.

- Mukdahan boasts a host of hotels and resorts for different tastes and budgets. Nakhon Phanom, Savannakhet, Thakhek also offer many choices for tourist accommodation, as do Hue, Danang and Hoi An.

- Thai baht can be used in Laos and sometimes in Vietnam, too.