See the sights of Sa Kaeo

A new asphalt road has been built along the border town of Aranyaprathet in Sa Kaeo province. A railway line is also under construction to extend its service to Ban Khlong Leuk, the border checkpoint where visitors can cross to Poipet in Banteay Meanchey province in Cambodia.

The Khmer sandstone ruins of Prasat Sdok Kok Thom. The name means a large swamp of weeds like that of umbrella sedge, according to the Fine Arts Department. The department has spent more than 60 million baht renovating the ruins in the past few years. Built in the 11th century to worship the Hindu God Shiva, the temple used to be a shelter for Cambodians from 1975-1979 when the Khmer Rouge ruled Cambodia. Prasat Sdok Kok Thom was listed as a historical national heritage in 1935 and is known as the largest set of ancient Khmer ruins in the eastern part of Thailand.

New hotels, coffee shops and shopping venues are being opened in Aranyaprathet, while new warehouses, factories and buildings, some under construction, have been erected along the main AH1 road in Poipet. Running almost parallel with the road for many kilometres is a train track, which needs to be completed so it can connect to Thailand.

"We expect to have more tourists and to welcome more businesses to Sa Kaeo thanks to the government's introduction of the Special Economic Zone [SEZ]," said Kirada Lumkorat, director of Sa Kaeo Provincial Office of Tourism and Sports Ministry.

Aranyaprathet is regarded as the main city of the Southern Economic Corridor of the Greater Mekong Sub-region that links Thailand to Poipet O'Neang SEZ, Sisophon Industrial Estate in Cambodia and to the seaport of Vung Tau in Vietnam. The total distance is about 900km. 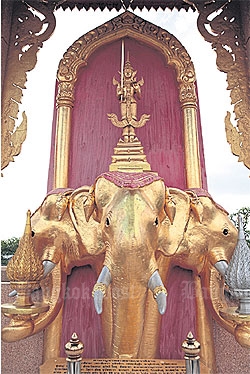 The 1.29m tall Buddha sculpture is Phra Siam Thewathirat or “Lord Protector of Siam”. Housed in a shrine next to the Aranyaprathet police station, the golden statue was given to the people in Aranyaprathet in 1986 by Phrakhru Uthai Dhammathari, the late abbot of Pa Mafai Temple in Prachin Buri as his blessing to help protect locals from rockets and bullets flying to the border town due to internal conflicts within Cambodia.

In the past five years, the value of border trade in Aranyaprathet grew by 28% to about 60 billion baht in 2014 and is expected to increase to almost 70 billion baht this year, according to Sa Kaeo Provincial Comptroller General Department of the Ministry of Finance. At least 30% economic growth is the government goal for the two-country trading point between 2015-2020, according to the Ministry of Commerce.

The growing business between the two Kingdoms is a far cry from the love-hate relationship of the past, including territory reclamation during World War II (when Thailand wanted to regain the northwestern part of Khmer once governed by the Kingdom before it lost it to France during the colonial period). Another face of the love-hate relationship was seen during the exchange of fire between troops of both Kingdoms over the disputed land near Preah Vihear temple in the Northeast of Thailand a few years ago.

When Cambodia started to welcome foreigners via the Poipet immigration checkpoint in 1998, the number of tourists crossing the border at Ban Khlong Luek in Aranyaprathet to Cambodia increased yearly. According to the Department of Tourism, the number of visitors in the past five years rose 60% from 1,053,226 in 2010 to 1,691,752 in 2014 and is expected to rise to at least 1.8 million this year.

Those visitors do not only make a quick stop at the border town, they also spend a day or two to exploring the attractions on the Thai side.

"Sa Kaeo is very peaceful and has many natural and cultural tourist attractions that are not far from Bangkok [about 245km]," she said.

The highlights include Prasat Sdok Kok Thom, which are Khmer ruins; Lalu which is the weird shape natural land formation; Khao Siva Cave or Tham Nam which is a cave with a stream; the beauty of colourful butterflies in Pang Sida National Park; and the largest flea market at Rong Kluea.

"Sa Kaeo is on the 2016 list of the new 12 Hidden Gems Plus tourism campaign, which will see more tourism activities to promote the province," Kirada noted.

In addition, some visitors travel to Sa Kaeo to try their luck in the casinos in Poipet, while many want to catch a bus or van to Siem Reap to see the magnificent Angkor Wat or to the Cambodian capital of Phnom Penh.

If you are not in a hurry, spare a couple of days to explore the friendly town of Battambang, located about 120km southeast of Poipet. Battambang is the capital of Battambang province and is the second-largest city in Cambodia.

Visitors can explore ancient ruins that are on a smaller scale than Angkor Wat, visit Thai influenced temples, ride bicycles around the city to see the well-preserved colonial buildings, admire contemporary arts in several modern galleries or watch the sun go down over the Sangker River.

"I am glad to see more visitors nowadays because right after the bomb blast in Bangkok [at Ratchaprasong in August], I didn't have foreign customers for a week as there were no visitors crossing from Thailand to Battambang," said Oeurm Or, a tuk-tuk driver, adding that the situation gradually returned to normal. "I hope for the better, especially during this coming high season," he added.

The SEZ is one step for both countries to share benefits of cross-border trading, business and tourism, said Kirada.

"Visitors can explore our hidden gems or conveniently cross to our neighbouring country. We expect SEZ will help attract more investors and tourists. It will eventually bring more income to the locals," she noted.

Situated on the banks of Sangker River, Battambang is a peaceful town despite the fact that there are still many unexploded landmines in rice fields or on undeveloped land.

A major trading hub in the 18th century, the province, along with Siem Reap and Sisophon provinces, was ruled by Siam for 112 years from 1795-1907 before it was colonised by France.

During the period, Battambang was governed by the Abhaiwongse family for six generations and the last Siamese governor was Choom Abhaiwongse who bestowed the title "Chaophraya Abhaibhubejhr" during the reign of King Rama V.

Remains of Siamese influences can be found at the old governor house and in a few temples such as Samrong Khong, Wat Tahm-rai-saw (White Elephant Pagoda temple) and Wat Kdol.

Battambang has well-preserved colonial buildings, as well as new modern art. When blended with the friendliness of its people, the town has a unique charm. 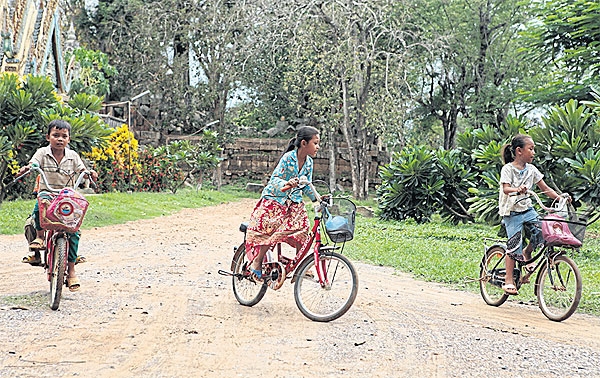 Kids ride their bicycles in the temple grounds of Wat Ek Phnom in Battambang, Cambodia. 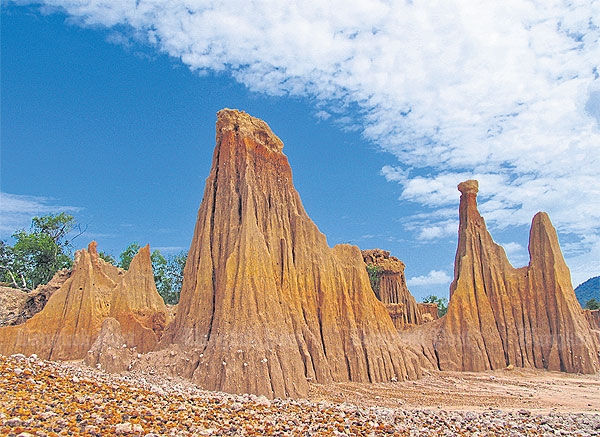 This section of landscape, called Lalu, is located in Ta Phaya district, about an hour’s drive north from Aranyaprathet. Lalu, which takes its name from Khmer means ‘piercing through’. Lalu covers an area of about 2,000 rai and visitors need to ride the e-taek farm truck to the site. The service fee is 200 baht for up to six passengers. 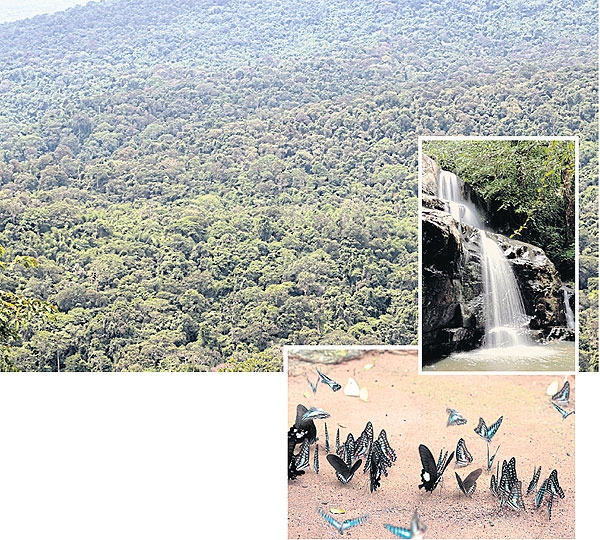 Watching colourful butterflies is popular in Pang Sida National Park, which covers 594km² of dense forest and mountain ranges. According to the park’s records, more than 400 different species of butterflies can be found. The best time to watch them are June and July, with another popular viewing spot being a salt lick right after the checkpoint of a dirt road leading to the KM 25 viewpoint. 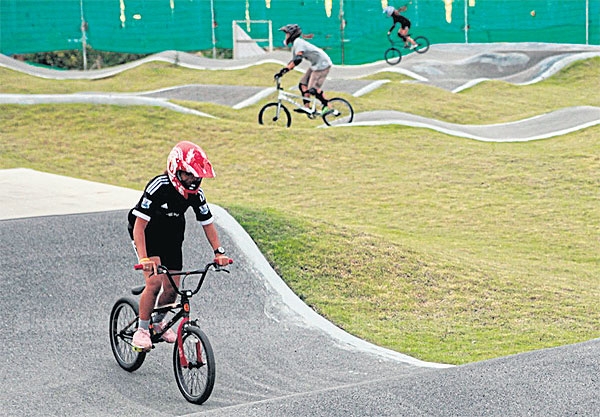 This pump track opened to bicycle riders and skateboarders last December. Known as the Aranyaprathet pump track, it is owned by local businessman, Anurak Thienthong, nephew of Sa Kaeo veteran politician Sanoh Thienthong and is designed by world-class pump track champions Claudio Caluori and Adrien Loron. There is no admission charge. Since there are no signs leading to the track, it is best to follow GPS coordinates: 13°41’42.9”N 102°30’09.9”E. 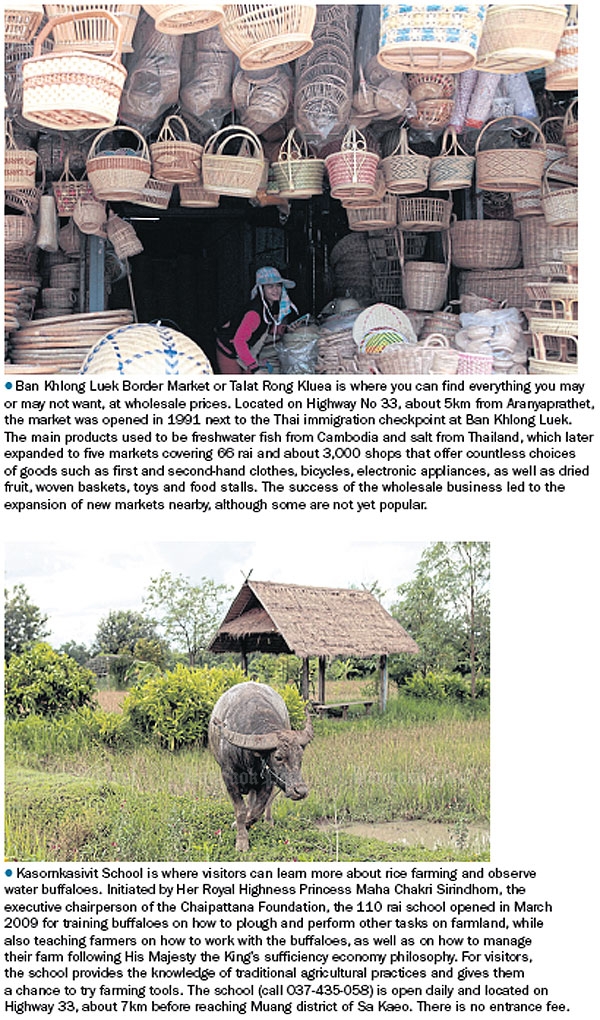 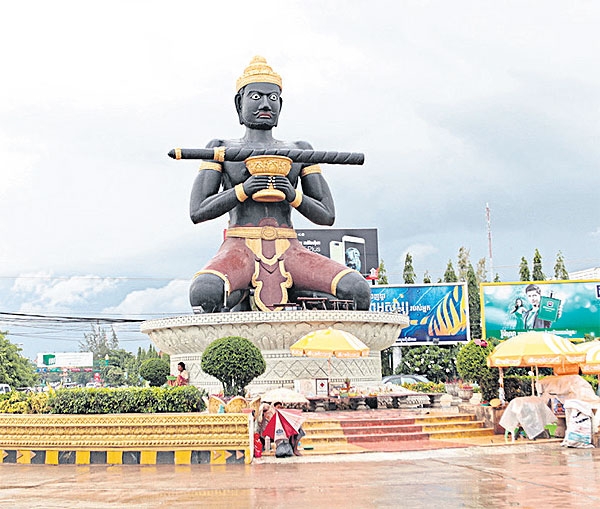 The Battambang statute or Ta Dambang Kro Nhoung, at 6.5m, is located east of the city at the roundabout on Highway 5. The literal meaning of the city, which shares the same meaning in Thai, is the club (dambang) that was blown away (bat). Locals are often seen paying respects to the king’s statue, the guardian of the city. 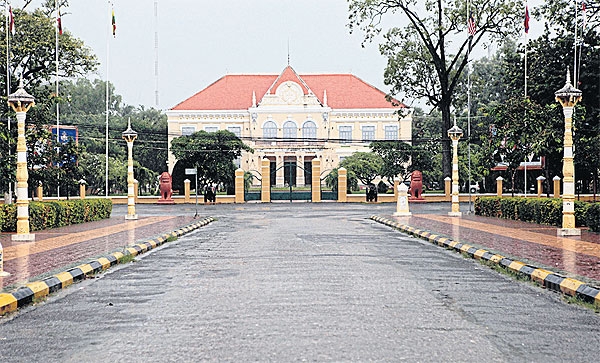 This old governor house is called Sala Khaet. Located in the north of the town, the European-style mansion was built in 1905 by the last Siamese governor Choom Abhaiwongse as his residence. During French rule, the building was used for military purposes and later as the Battambang Provincial Hall. At present, the 110-year building is to the public. You may find the design of Sala Khaet very familiar if you have visited the Chaophraya Abhaibhubejhr Hospital in Prachin Buri. This is because after returning to Siam, the governor built the mansion to resemble Sala Khaet, which was used as a residence for King Rama V during his royal visit to Prachin Buri. However, the monarch passed away before construction was finished. The building was turned into a hospital in 1941. 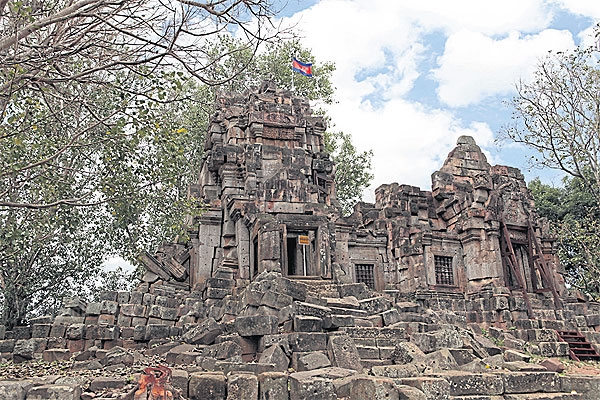 Located about 15km northeast of town, Ek Phnom Temple is one of the must-sees, although it does not compare to the magnificent Angkor Wat in Siem Reap. Built in the 11th century, the ruins are under renovation. The entrance fee is US$3 (108 baht). 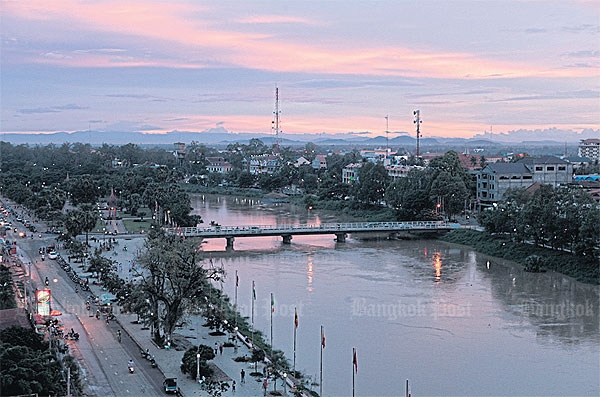 Sangker River is one of the main rivers in Battambang. It flows through the heart of the city before ending at Tonle Sap, the largest freshwater lake in Southeast Asia. 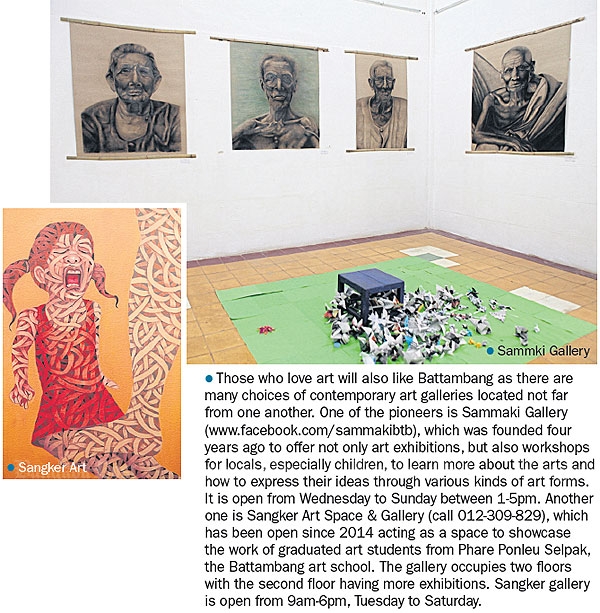 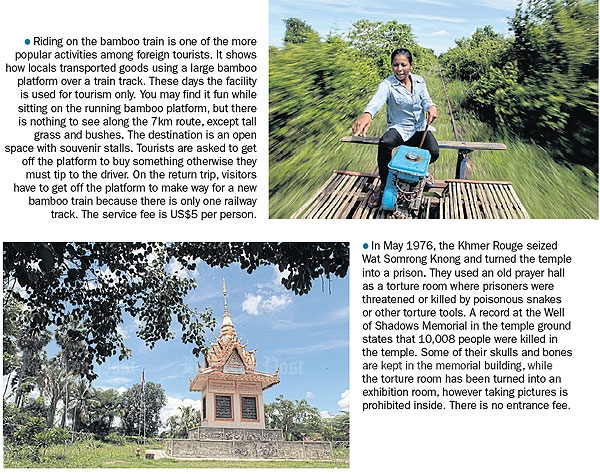