It is rare to be able to witness several major rituals at one place in one day. Fortunately, the ongoing Jim Thompson Farm tour in Nakhon Ratchasima makes it possible by simulating six rice-related ceremonies of northeastern people under the concept of "Mang Moon Bun Khao". In Isan dialect, "Mang Moon Bun Khao" reflects cultural diversity and fertility of the rice culture in the Northeast, or Isan. It reflects the close ties between rice and the local way of life, as seen in the "Heet Sibsong", or a year-long series of merit-making traditions and beliefs.

The first to see is the bun khoon lan ceremony held in the second lunar month of each year to mark the completion of rice harvest and bless the harvested rice. Farmers put their rice together in the form of piles called lom khao. They invite Buddhist monks to have a meal, pray and sprinkle holy water on their rice. In certain areas of the Northeast, farmers perform the soo khwan khao ritual to pay respect to the Goddess of Rice and the Goddess of Earth who bless them with fertility, followed by the plong khwan khao rite in which farmers remove rice paddies from the ears of rice. People in some communities present the rice paddies to the temples during the bun khoom khao yai ceremony. In some communities, rice paddies will be used in building prasart khao, or rice castles. These rituals make farmers aware of the value of rice and ensure they feel proud of their occupation.

After visiting a large prasart khao at the farm's Northeastern Village, visitors can see the simulated bun khao jee ceremony held over three days after the Makha Bucha Day in the third lunar month of each year. Northeastern people present monks with khao jee, a kind of dessert made from sticky rice, rolled into a ball, dipped into sugar cane juice and egg and roasted. After the monks finish the food, there is a sermon. The khao jee leftovers from the monks are shared among the people for good fortune. This ritual is inspired by a Buddhist legend about Poonnathasi, a poor woman, who presented khao jee to the Lord Buddha.

After tasting khao jee and a few other local desserts, the visitors will reach a big wooden pavilion in which the bun phawes ceremony is depicted through handicraft making and ceremonial decoration with cloth and paper models of wild animals and trees as well as phawes clothing. Held in the fourth lunar month of each year, bun phawes, also known as the Mahachart Ceremony, is when Buddhists make merit and listen to the story of Phra Vessantara, the Lord Buddha's last previous life as a prince who loved to give. Participants make rice balls called khao phankon to worship the monks and sprinkle uncooked rice on the ground during the ceremony, symbolising a sacred rainfall.

Near the pavilion, visitors will be able to see a procession of a wooden phallus and rhythmic dances for the bun bungfai ceremony. Held in the sixth lunar month when people start rice planting, this ceremony is a tribute to Phya Thaen, a sacred spirit who controls the rain. Northeastern people use bungfai in pleading for ample rain for rice farming. The bungfai parade includes a wooden phallus which symbolises the relationship between the sky and the earth, men and women, energy and fertility.

In another pavilion, the visitors will have the opportunity to make merit and present food and products to real monks in the simulated bun khao pradabdin and bun khao sak ceremonies.

The bun khao pradabdin ceremony is performed on the 14th waning Moon day of the ninth lunar month for people to make merit for their deceased relatives and thank the Goddess of Earth. Food, desserts, fruits, betel nuts and leaves and cigarettes wrapped in banana leaves are hung on tree branches or on the ground near big trees, pagodas or temples. Alms-giving, sermon-listening and water-pouring rituals have been added in recent decades.

The bun khao sak (salakphat) ceremony is held on the Full Moon day of the 10th lunar month to make merit for the dead and ghosts. Northeastern people give alms to monks in the morning and present food and items of necessity to the monks at temples before lunchtime. They write their name on a piece of paper and put it into the alms bowl for the monks to pick up. The person whose name is called out will present their food to that monk.

At the Northeastern Village, visitors can mill rice using hand-operated wooden rice grinders, winnow the rice and take home their own rice crop. They can also pose for pictures with the famous water buffalo named Boonlai and observe the full life cycle of the silkworms and the silk farming process.

Another must-see at this farm is the new Molam Bus which will take visitors into the world of molam, a genre of Isan music, through an exhibition and performances.

Like every year, the Jim Thompson Farm tour allows visitors to pose for pictures in the 40 rai field of pink "cosmos", a patch of giant pumpkins and a big field of colourful flowers, and pick and buy organic vegetables at the U-Pick Garden. In all, anyone can bring back home joy and knowledge plus veggies and silk. 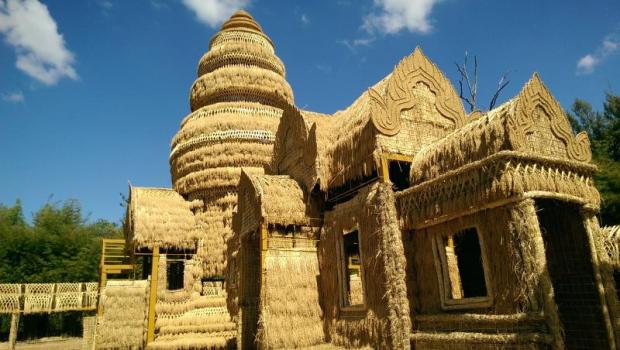 Prasart khao, or a rice castle, at Jim Thompson Farm. 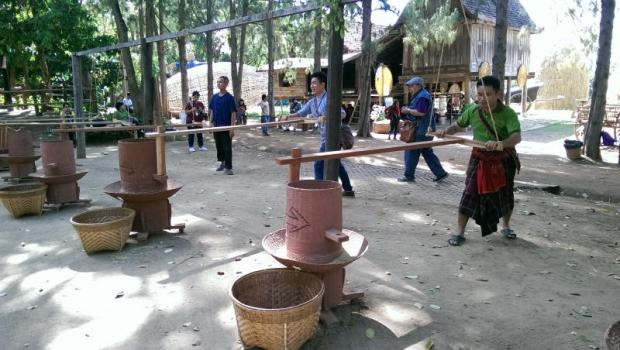 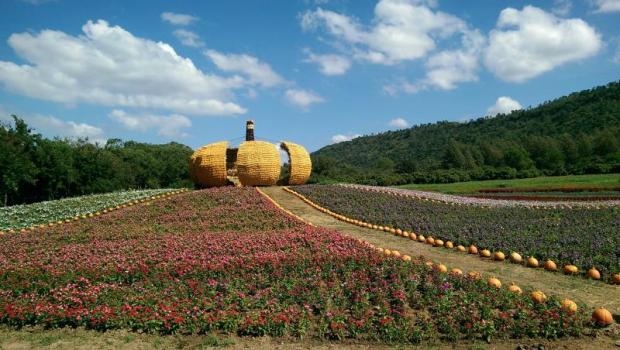 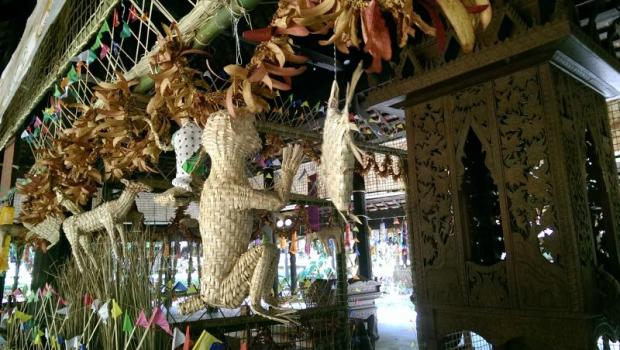