A shared Thai-European past
Travel

published : 31 Mar 2016 at 04:00
newspaper section: Life
writer: Pichaya Svasti
Located near the Royal Plaza, Ananta Samakhom Throne Hall is a masterpiece of Italian Renaissance and neoclassical architecture in Bangkok. It was commissioned in 1907 by King Rama V to Italian architects Mario Tamagno and Annibale Rigotti. The dome and walls are adorned with paintings of Gelileo Chini and Carlo Rigoli, while the sculptures are the work of Italians Vittorio Novi and Rodolfo Nolli. These art pieces were inspired by Buddhism and the Siamese monarchy. The building was completed in 1915. It had served as the Parliament House from 1932 to the 1960s. It is now the Exhibition Hall dedicated to the art of the reign of His Majesty the King.

One recent sunny day, European Union diplomats and Thai journalists enjoyed a half-day bike ride in the heart of Bangkok to explore some of the many European-influenced places according to the 2016 European Heritage Map and App. This 14km biking trip combines two of the four heritage trails.

Each route covers about 12 to 18 sites in Bangkok, easily taken either by foot, bicycle or public transport. With a total of 217 listed sites and monuments in 25 cities throughout Thailand, the European Heritage Map and App project is one of the largest sources of free information on Thai-European common heritage. It highlights the deep-rooted cultural ties between Europe and Siam.

"This biking tour was a pleasurable eye-opener. Thanks to the 2016 European Heritage Map and App, complemented by the four newly-completed Heritage Trails, we'll be able to further embrace the unique diversity of our common Thai-European heritage," said Luisa Ragher, deputy head of the Delegation of the European Union to Thailand. "The architectural treasures speak volumes of a shared past."

The Italian diplomat personally likes palace buildings in the Portuguese, Italian, German and British styles throughout Bangkok, adding that details on biking trails and public transportation are useful.

The 2016 edition of the map has been improved, with clearer graphics and beautiful photos that make it easier to read. It contains several additional sites of historical and cultural importance in and around Bangkok: SAB Junction and SAB Building in Yaowarat; Luang Kocha Isahak Mosque on Songwat Road; Maen Si Water Pumping Station; St Gabriel College in Dusit; the old Supreme Court building near Sanam Luang; the Queen Saovabha Memorial Institute near Chulalongkorn Hospital; and Sanam Chandra Palace in Nakhon Pathom.

The success of the 2013 version of the map inspired the EU Delegation to create an application for smart phones apart from the map.

The project developers plan to capitalise on the map and application by working with schools to create activities such as cultural days, and to design more trails with new themes, bettering signage and publishing a guide book. They will inform travel agents about the app, leave the maps at hotel lobbies and promote the map and app via social networking. The map will be updated every year, and the calendar of cultural events on the app will be updated every month.

"Many sites may come as a surprise -- palaces designed by Italian and German architects, churches established by the French and Portuguese, trading posts left by Danish and Dutch businessmen, bridges of Belgian and British make, diplomatic missions and others," Luc Citrinot, a Frenchman who worked on the map project, said.

According to him, Thailand has one of the most interesting heritages. Back in the 1900s, when colonisation was at its peak in Southeast Asia, with Burma under British rule and Indochina going by the name French Indochina, Siam sought to negotiate and preserve its sovereignty and image. From 1860 to 1930, the Siamese monarchy brought engineers and architects all the way across Europe to Bangkok. Around 1905, there were about 200 European expatriates employed by the Public Works Department.

Citrinot claimed that Western-style buildings mushroomed in Bangkok mostly during the reigns of King Rama V and King Rama VI, since both monarchs carried a vision that Siam modernity should be reflected in European-style architecture.

However, Vasu Poshyanandana, senior architect of the Fine Arts Department's Office of Architecture, argued: "We feel our country is civilised. It is true that it was Western architecture, but this 'civilised culture' was started by our kings, not [Western] generals." Pongkwan Sukwattana Lassus, an architect and member of the Association of Siamese Architects, added that European architecture is just a part of Thai heritage, because Thais have absorbed all good cultures.

"There is a Thai touch that is different from the original one. For example, the Chakri Maha Prasat Throne Hall was designed by a British architect but topped with a Thai-style roof that makes it unique," she noted.

Asst Prof Neungreudee Lohapon, of the Faculty of Arts, Chulalongkorn University, said Bangkok, from the very beginning, was a multicultural hub where anyone could see European, Indian, Chinese and Thai cultures together.

Christian Sutton, product manager of Khiri Thailand travel agency, said: "Tourists want to see a cultural side apart from the local. In Thailand, tourists are not aware of European cultural heritage. We have to educate them. People don't see Thailand as a European cultural site because it was not colonised. People need to know about the map."

Jenni Lundmark, attache and programme officer of the Delegation of the European Union, said the biking tour is a great way to see Bangkok.

"It's not hard. It's also interesting for us to learn about our joint history on a daily basis. We appreciate cultural diversity, tolerance and freedom. Take your bike, go on one of the trails and you will find many cultural heritage sites. History is an important way for us to look into the future," she noted.

To download the Eunic mobile app for IOS and Android free of charge, just search "European Heritage Map and Cultural Calendar of Thailand" at your app store. 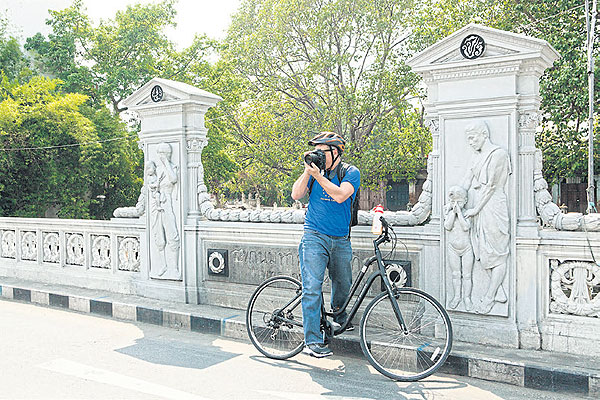 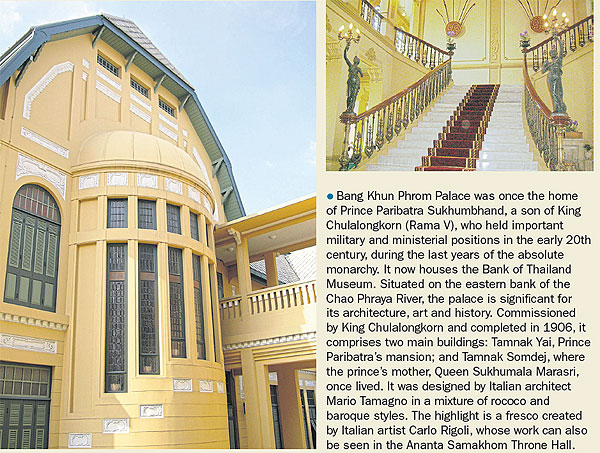 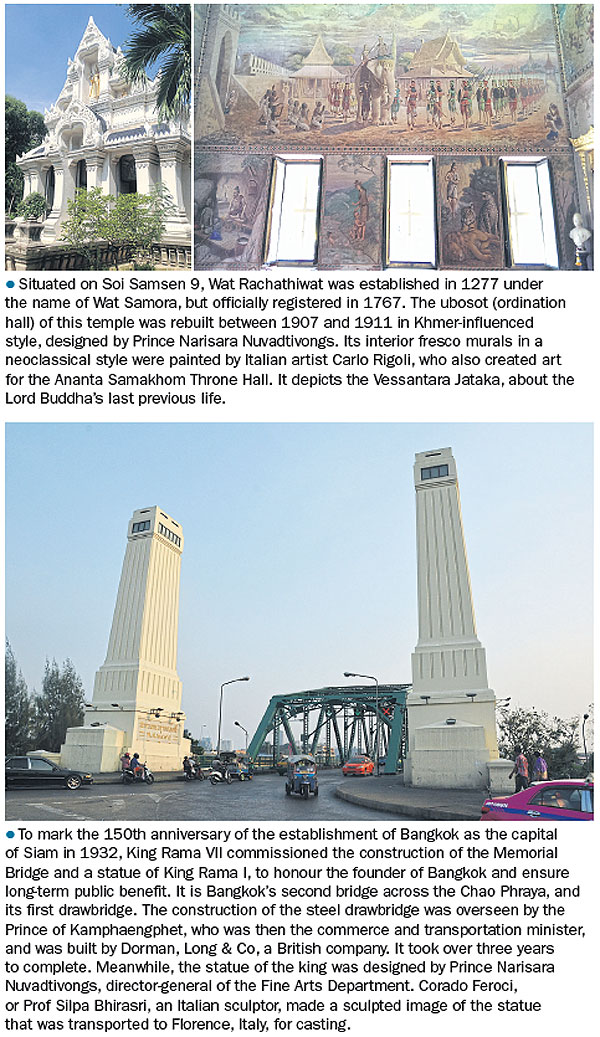 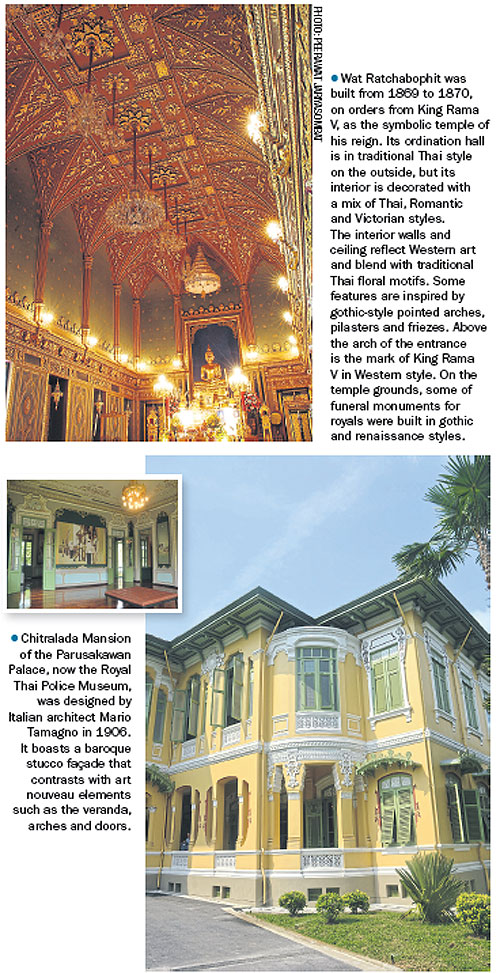 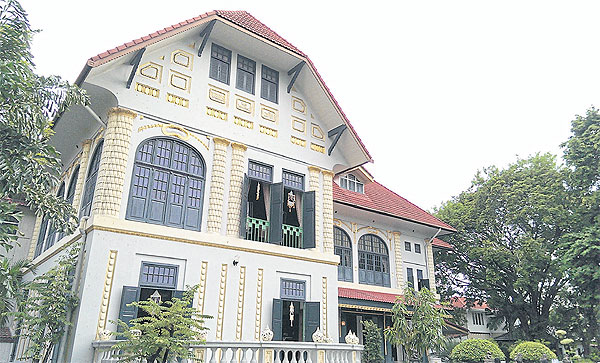 Located on Lan Luang Road, Varadis Palace was the residence of Prince Damrong Rajanuphap, a former interior minister, and is now a private museum. It was built in 1910 and 1911 and designed in the German art nouveau style called Jugendstil by German architect Karl Siegfried Dohring (1879-1941), who also designed Phra Ram Ratchaniwes (Ban Puen) Palace in Phetchaburi, Tamnak Somdej (a villa within Bang Khun Phrom Palace) and Phayap Palace, which is now a Metropolitan Electricity Authority branch in Bangkok’s Dusit district. The façade sports details inspired by floral motifs and the columns are adorned with geometric foliage motifs. 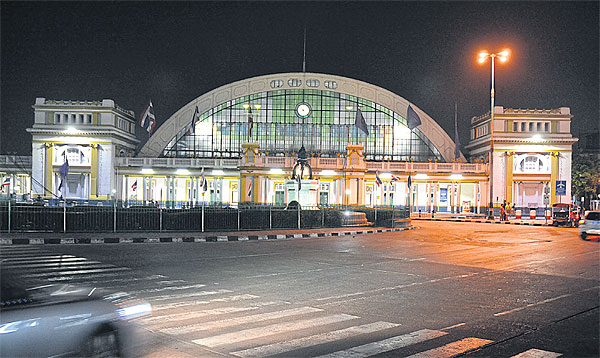 The Bangkok Railway Station, better known as Hua Lamphong, was built between 1910 and 1916. It was designed by Italian architect Mario Tamagno in the Italian Renaissance style with a dome, and resembles the Frankfurt Railway Station in Germany. It is made of ready-to-use construction materials from Germany, its staircases and pillars adorned with beautiful motifs. The hallway is made of marble, while its ceiling is made of carved teak — a rare art style. There are stained-glass windows on the front and rear of the building, as well as a clock in front of the dome. 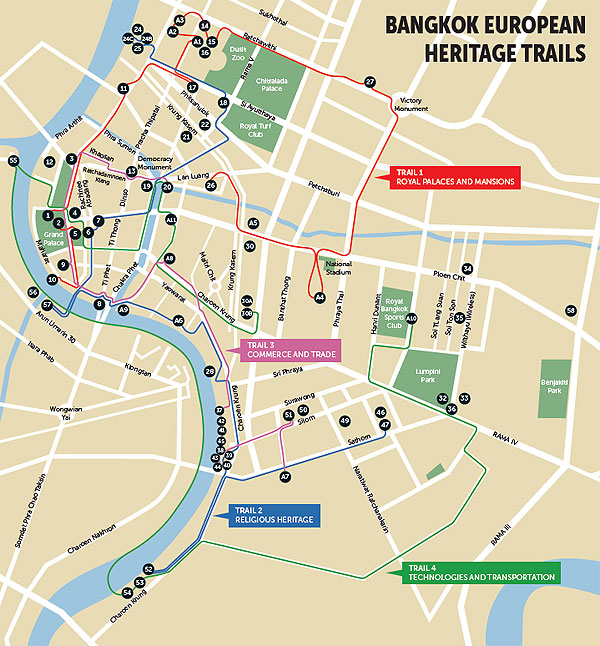