Take me to the river
Travel

Take me to the river

As the controversial riverside bicycle promenade continues to inspire debate, we take a look at existing routes along the Chao Phraya

Google "Chao Phraya Promenade" and you are met with numerous negative headlines and terms such as "fear", "mixed response" and "shaky". A 14 billion baht development project that will link the Rama VII and Pin Klao bridges together, the promenade will include parks, recreational areas, walking paths and spacious bicycle lanes with full access and views to the river. This is the first in a series of planned river projects that will eventually cover 57km of the banks of the "River of Kings".

The latest public hearing that was organised last week by King Mongkut Institute of Technology Lat Krabang and Khon Kaen University on the project found both academics and community representatives voicing their opposition, raising points such as insufficient data on social benefits, a lack of clear objectives from developers and a great disruption of community life. With the Makasan Fort drama still an ongoing affair, there is reasonable debate and scepticism from local communities surrounding this project the BMA is trying to push forward.

Riverside promenades are public spaces for people to gather, hang out, walk or go for a pleasant bicycle ride. According to Sakul Horwanotayan, one of the managers for the project, it could open up the Chao Phraya's true potential and offer residents and tourists scenic views of the river. However, with this much opposition and countless more hurdles to get through, when the project will actually come to a head is unknown.

But does the city really need an expensive bicycle lane? Bangkok has long stretches of riverside areas and we've surveyed some of pre-existing bicycle routes next to or nearby the Chao Phraya River where one can have a pleasant riverside ride, promenade or not. 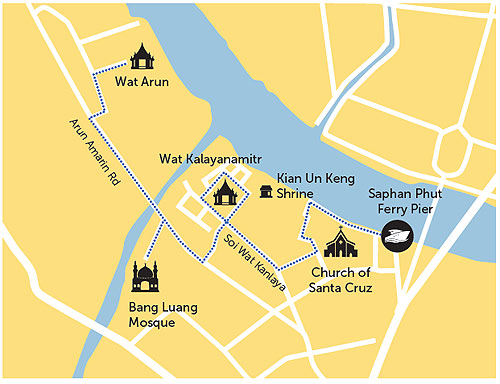 Thon Buri is a small but significant historical quarter in western Bangkok and is one of the best places to cycle around to get stunning views of the Chao Phraya River. It doesn't hurt to ride around aimlessly in the charming neighbourhoods of old Thon Buri communities, as the area features a harmonious mix of diverse ethnic groups and cultures from Thai, Chinese and European, Buddhists, Christians and Muslims that have settled there since the 18th century.

 Start off at Saphan Phut (Memorial Bridge) on the Thon Buri side by either crossing the bridge or taking the ferry. Ride along the riverside and take Thetsaban Sai 1 Road to visit the Church of Santa Cruz, a Portuguese Catholic Church built in 1770, rebuilt a number of times in the early 1900s. The Kudijeen community, a former settlement of Christian Portuguese surrounding the area, is also worth cycling around.

From there cyclists can go down Soi Wat Kanlaya to find the rustic Kian Un Keng Shrine, one of the oldest shrines in Bangkok right on the river. Go out to Arun Amarin Road to visit Wat Kalayanamitr Varamahavihara, with the largest bell in Thailand and where an enormous Buddha statue sits, then continue down Arun Amarin Road to visit the prominent landmark Wat Arun Ratchawararam Ratchawaramahawihan (Temple of Dawn). From there you can take the ferry back to Tha Tien Pier on the Rattanakosin side. Another notable site is Bang Luang Mosque, across Wat Kalayanamitr Varamahavihara, the only mosque in Thailand built in a traditional Thai architectural style. 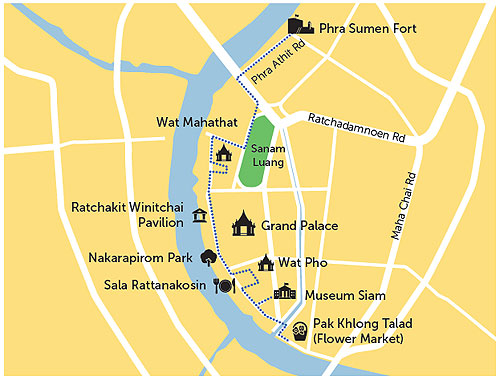 Just across from Thon Buri is an area that has gained and is still gaining popularity among local hipsters and cyclists alike. Rattanakosin Island, or the "Old City", is straddled by the Chao Phraya River and home to a majority of Bangkok's most famous historical landmarks (and hippest cafés and restaurants). With bike lanes already set in place around the area (though mostly blocked off by parked tuk tuks), it's a decent place for a ride.

 Starting off at Bangkok's biggest flower market, Pak Khlong Talad, cyclists can pedal their way through Maha Rat Road and make stops at Museum Siam, Wat Pho, Sala Rattanakosin, the Grand Palace and Wat Mahathat, or at the quaint cafés and restaurants along the way. Sadly, the river can only be seen at certain spots along the road. Some of the best spots to get a panoramic view of the river would be at Yodpiman River Walk, next to the flower market, Sala Rattanakosin (or any riverside restaurants), Nakarapirom Park, Ratchakit Winitchai Throne or the Santi Chai Prakan park at Phra Sumen Fort, which is the end of the route.

Situated around 17km northwest of Bangkok is an islet in the middle of the Chao Phraya River. Koh Kret, in the district of Pak Kret (home to the most expensive durian), is a rare piece of untouched greenery and is one of the oldest settlements of Thailand's Mon people. Lush, rural and with no large roads or skyscrapers, the island is known for its ancient temples, authentic Mon community and culture, traditional riverside houses and local crafts and earthenware pottery. Step back in time while cycling around Koh Kret to experience what Bangkok was like around a century ago.

 With one main cement pathway making a full circuit of the island, cycling around Koh Kret couldn't be any simpler. Cyclists, however, may have to manoeuvre their way around pedestrians, motorbikes and livestock sharing the same narrow concrete strip.

The route begins at the Wat Poramai Yikawat pier, the main pier for the island. Across from the pier is the Poramai Yikawat temple, featuring a Mon-style marble Buddha statue, a 200-year-old leaning stupa and a museum exhibiting religious objects and local pottery.

From there, cyclists can choose to head either south or west, and visit pottery villages, abandoned kilns and numerous temples along the way with the Chao Phraya River popping up periodically on the north and east sides of the island behind the riverside houses along the route. It's best to go for a ride on a weekday, as weekends see hordes of tourists that may completely block off the pathway.

Samut Prakan Route (up to 20km)

A 20-minute car ride and a five-minute boat ride from the concrete jungle that is Asok is Bang Krachao, Samut Prakan -- home to the "Green Lung" of Bangkok. Now a popular attraction for those wanting to get away from the stifling heat and pollution of inner Bangkok, Bang Krachao is the place to go to for a fulfilling, nature-filled ride. The land mass that has been a settlement for Mon is hugged by the Chao Phraya River and is full of lush jungle, fruit plantations, preserved temples and villages of wooden houses with no modern buildings or skyscrapers in sight.

 Most cyclists choose to start at the Bang Krachao pier (after crossing from the Wat Klong Toei Nok pier) and worm their way through the narrow, winding roads and raised embankments paths situated above the river, canals, swamps and plantations. For glimpses of the Chao Phraya River, it's best to cycle around the water's edge of the island-like land mass. Riding east for about 5km, cyclists can visit the charming and run down Wat Bang Nam Phueng Nok temple, erected in the reign of King Rama IV. Following the road for another kilometre, cyclists can take in the stunning view of the river at Bangkok Tree House eco-hotel, then continue on to the Bang Nam Phueng Floating Market another kilometre-and-a-half away. From there, it's hard to find views of the Chao Phraya River, but it doesn't hurt to ride south to visit more temples, community forests and visit the Lad Pho Park where the epic Bhumibol Bridge is at the end of the peninsula. 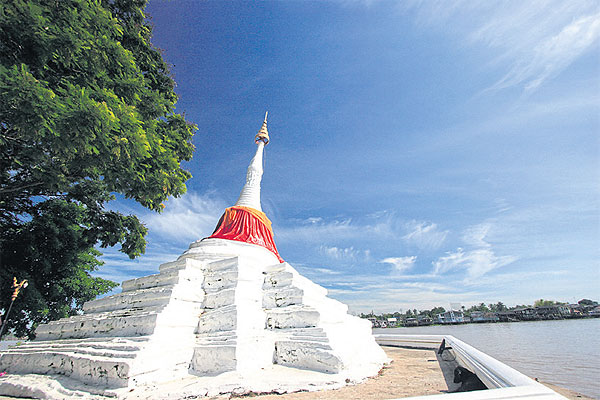