The unique celebrations, and backstory, of Tung Saowa in Lampang

published : 5 May 2016 at 04:00
newspaper section: Life
writer: Peerawat Jariyasombat
Villagers carry a tung saowa and dance under the water spray.

After splashing water throughout Songkran, the villagers of Ngao district in Lampang continue celebrating in their own way -- by making an extra-long traditional flag.

It is a very hot day in April. The temperature has reached 45C. Summer heat has driven people to seek shade or sit in a place with a refreshing breeze, relaxing after a long day of celebrating by splashing water. Buddhists in Ngao district, however, remain working. They are making a traditional long flag to fly in the Tung Saowa ceremony.

The Lanna traditional flag is different from others. It is narrow, but quite long and hangs vertically. Ngao Buddhists make the tung saowa in their own unique way. It is around a metre wide but more than 20m long, and decorated with colourful paper. 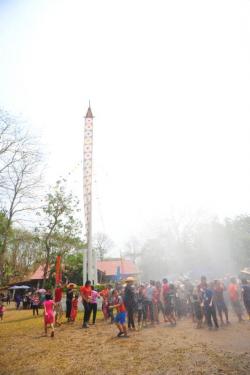 "The flag comprises parts of animals that represent four of five different forms of Buddha, according to Buddhist belief. The head of the flag has the shape of a rooster's head. The round patterns on the flag represent a bull's eyes. Each block on the flag represents a turtle and the splendid flag tail takes inspiration from the Naga's tail," Wallop Nonthamal, secretariat of the cultural council, Ngao district, explains.

Tung is a northern word meaning flag. Saowa means 20 wa, which is roughly 40m. For centuries, the local people of Ngao have flown this extra-long flag to make merit for Princess Suppakit.

The story has it that Princess Suppakit ruled the ancient town of Lampang, which was located at the present-day Wat Sri Mung Muang of Ngao district. Her brother, Prince Karapat, who ruled Phu Kamyao (present Phayao) made a visit disguised as a beggar. When he arrived in Lampang, the disguised prince asked for some food, but Princess Suppakit handed him rotten food. The angry prince returned to Lampang with his army and defeated the town. Princess Suppakit fled before being arrested at the river bank.

Prior to this, however, the princess had saved two snails from being burned in a fire. The snails then became angels, who were lucky enough to be there to witness the princess about to be executed. To help, they unfolded a very long tung and dropped it from the sky, which allowed the princess to climb out of harm's way.

It is to make merit for the princess that Ngao people celebrate the flag ceremony. They also believe that the ceremony will result in a substantial rainfall for farmers. The length of the flag indicates how long the rain will fall in the coming season. The longer the flag, the longer the rainfall.

"There are many factors that determine the length of the flag. In the past, a poor harvest of cotton meant people could produce less cloth. 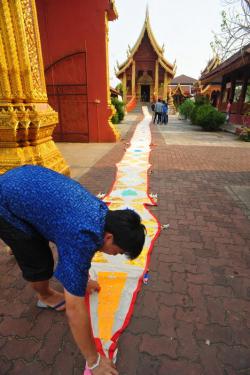 A man unfolds a tung saowa from earlier years. It is over 30m long.

"Today though, we can buy cloth from the factory, but the cloth we get does not come at the exact length we want. It can be a bit shorter or longer. Moreover, the decoration also influences the flag length," Wallop replied, when asked as to why people do not make flags long enough.

On April 17, a few days after Songkran, people gathered at Wat Mon Sai Non, the designated venue for the ceremony. After merit making and a local ceremony, the flag is carried out by people, who then go around the flagpole. Traditional music is provided by a live band that encourages the participants to dance.

Under the cloudless sky, it was so hot that the municipality prepared a fire truck to spray everyone with water. People got soaked, but that made them happier and able to continue dancing.

The grass lawn around the flagpole turned muddy as hundreds of people danced under the water spray. Laughter filled the air, while kids waited for the next spray of water. Adults carried the flag to the pole to hoist it and its tail just touched the ground.

"It has never been this short," Siwan Khamtai, the medium who makes the forecast said. "Last year, the tail of the flag reached the stairs, some 20m away. This year will be very hot and dry."

Ngao people know that her forecast is just part of the ceremony, so whatever Siwan forecasts for the coming season, the villagers still enjoy keeping this local ceremony alive.

The Tung Saowa ceremony is held on the morning of April 17 each year at Wat Mon Sai Non, Ngao district of Lampang province.

Ngao is 83km northeast of Lampang town. It can be reached via Highway 1. Night trains leave Bangkok daily for Chiang Mai, via Lampang. Call 1690. 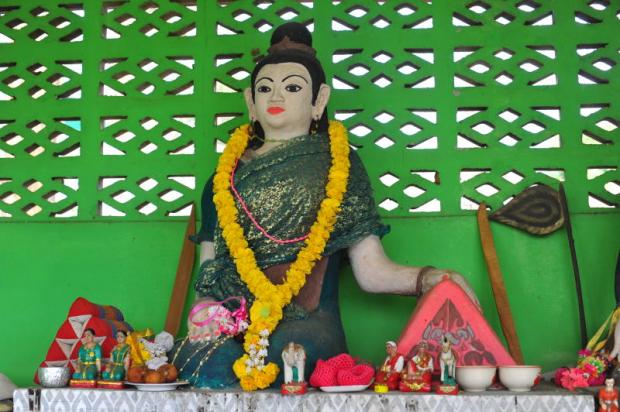 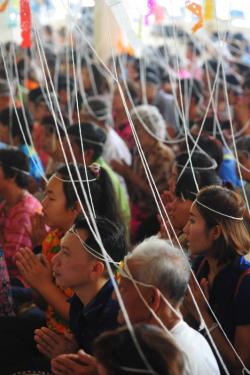 Ngao Buddhists participate in the ceremony, held to commemorate Princess Suppakit who, according to legend, once ruled Lampang.