Islands off Phangnga may be shut
Travel

Islands off Phangnga may be shut

The Department of Marine and Coastal Resources might close Koh Khai Nui, Koh Khai Nok and Koh Khai Nai off Phangnga province after finding more than 80% of coral reefs have been damaged due to heavy tourist activities. 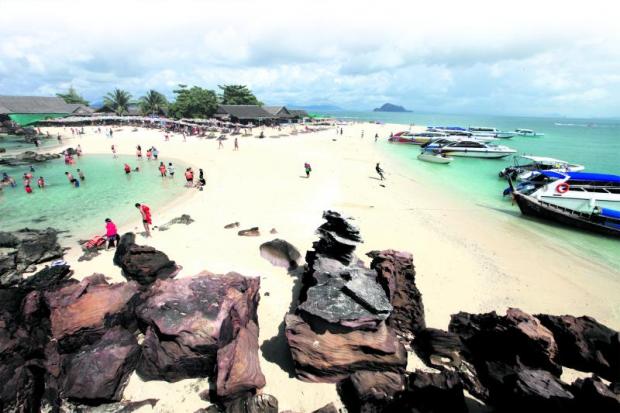 According to the department deputy director-general Sakda Wichiansin, the islands are popular snorkelling spots due to a large area of coral reef, which spreads around 368 rai. About 70 tourist boat trips bring up to 4,000 visitors to the islands every day. That number can rise to 10,000 visitors during a long weekend.

However, the three islands are too small to handle such an amount of tourists, he said, adding that Koh Khai Nui is only 2 rai, while Koh Khai Nok and Koh Khai Nai are 16 rai and 27 rai, respectively.

When tourist boats bring people to snorkel around the islands, they drop the anchor in the area of the coral reef. Many tourists also step on coral while some take pieces as souvenirs. Such activities have damaged about 80% of coral reefs so far, said the deputy director-general.

As a result, the department last week announced new regulations to protect natural resources. The rules include prohibiting boats to anchor in the area of the reef. Snorkelling and diving are not allowed during the month of June to August. Resorts on the islands must stop offering diving courses. Those operators who violate the rules will be imprisoned for the maximum of one year or fined up to 100,000 baht or receive both penalties.

If the situation is not improved after the three-month period, the department will consider closing the islands from all tourist visits, he noted.

Last week, Koh Tachai in Similan National Park off Phangnga province was closed indefinitely due to heavy tourism on the island. The closure aims to ease negative effects on natural resources and the environment.

Thailand is one of the top three most-visited destinations by Chinese Free Independent Travellers (FIT), according to a study by Phocuswright, a travel industry research company.

Sponsored in part by TripAdvisor, the study was conducted among 3,143 outbound travellers from mainland China. It found that Chinese FIT are younger, well-educated and relatively affluent.

About 77% of the participants have an undergraduate degree or higher and have a monthly incomes of US$2,296 (80,360 baht). They are self-reliant, favouring free-and-easy itineraries over prepackaged group tours.

Although more than half of them travelled abroad to get away and relax, 42% indicated that shopping was a crucial motivation, especially for trips to Japan and South Korea.

About 49% of them also plan to take more trips in the next two years and 52% want to take longer trips abroad.

The campaign will last until March 31 next year. The airline also offers fly and drive packages. Those who purchase Royal Orchid Holidays package tours with a KTC credit card for four people or more will receive a visa application fee waiver for one person.

THAI recently increased the flight frequency from Bangkok to Auckland, New Zealand, from four flights per week to five flights per week. The route is operated with Boeing 777-200ER aircraft, with 30 seats in Royal Silk Class and 262 seats in Economy Class.

Emirates will increase its daily service to seven flights between Dubai and Bangkok starting from July 1.

The additional service will be operated with a Boeing 777-300ER aircraft and will join the existing four daily A380 and two daily 777 flights. The seventh flight will enhance the weekly services on the route to 49, adding another 2,520 seats and up to 134 tonnes in cargo capacity per week in each direction between Bangkok and Dubai.

From July 1, the new service will depart Dubai at 7.50pm and arrive at Suvarnabhumi International Airport at 5.10am of the following day. The return flight will depart Bangkok at 6.35am and will arrive in Dubai at 9.50am.

The hotel is under construction and located in the heart of Samui entertainment and nightlife attractions and not far from Central Festival Samui shopping mall.

When completed around early 2017, the property will feature 129 rooms, a restaurant, rooftop bar and a swimming pool.

The ibis Styles is an economy brand of AccorHotels and one of its fasting growing brands in Asia Pacific, said AccorHotels Upper Southeast and Northeast Asia COO Patrick Basset. The targeted customers are young domestic and intra-Asian guests.