Loei is one of the 12 provinces chosen by the Tourism Authority of Thailand (TAT) as must-sees. With mountains in various shapes and its location by the Mekong River, this Northeastern province boasts beautiful, natural attractions, which are different from those in the other Northeastern provinces.

Among the popular natural attractions of Loei are Phu Kradueng, Phu Luang, Phu Rua and Phu Pa Poh which are all mountains, or phu in the Northeastern dialect.

TAT has been surveying and introducing new attractions to tourists to experience and learn more about Loei's nature beauty, said Somradee Chitchong, TAT executive director of the northeastern region. One of the attractions being promoted by TAT is Phothisat Cave -- a natural art classroom with tree roots that resemble art pieces.

Three outstanding adventures are bamboo rafting on the Lao Stream in Phu Rua, rubber boat rides with Level 5 Difficulties through rapids on Sak Stream in Phu Rua and bicycle trails on Phu Luang and Phu Kradueng. Another new attraction is Phu San Sai National Park in Na Haeo district where birdwatching is recommended since it is the only habitat of the rare short-tailed parrotbill birds.

Loei has several places to watch the sun rise in a sea of mist, including on Phu Thok in Chiang Khan district, Phu Hor, Phu Por and Phu Pha Buak. The Tat Hong Waterfall or the waterfall of two lands, is another hotspot since half of it is in Thailand and another half is in Laos, Keadtipong added.

Visitors can drop by at the Vihara Buddha Chayantee, or the shrine of eight Chinese deities. After that they can taste sweet pineapple, which Loei is famous for, at the Rai Muang Plantation. The Huai Lat Forest Monastery, which boasts the white calcite stone principal Buddha statue named Phra Sapphanyu Roojaeng Samdaen Lokkathat, is worth a visit. The Vimuttisuk macadamia plantation and Phu Rua Ruan Mai resort-and-rice field in Phu Rua district are not to be missed, either.

A local ceremony for locals and visitors to cleanse and decorate Phra That Si Song Rak in Dan Sai district and the process to create trees of beeswax flowers for presentation to the stupa, is another ritual that tourists can enjoy. After the trees are made, a procession of monks-to-be and the trees is carried out to Wat Phra That Sri Song Rak. A ceremony to worship the stupa and present the trees of beeswax flowers to the stupa soon follows.

It is worth travelling to Phu Luang district to see where the Loei River begins. Nong Hin district is 31km from the river where one can climb a small hill to visit Phothisat Cave.

Chiang Khan is a quaint small town where a typical massage called yong sen can be enjoyed. To view the sunset in all its glory, it is best to get on a boat on the Mekong River right before the sun goes down.

After staying overnight in Chiang Khan, it is worth waking up at 5am for Phu Thok Hill, where one can see a sea of mist over the mountains and the town of Chiang Khan below. Try khao poon nam jaew, a local noodle with shrimp paste, at Pa Bua Wan restaurant for breakfast.

It is worth travelling 68km to Pak Chom district and trekking up Phu Hor Hill to enjoy panoramic views of the Mekong River and Thai-Lao borders. A local lunch by the river at Ban Khok Phai is enjoyable.

Besides its many natural attractions, Loei is the abode of cultural attractions and traditions. One of the landmarks is Phra That Si Song Rak in Dan Sai district, which is a stupa and symbol of Thai-Lao friendship.

"These local traditions are centuries-old, deeply rooted and so charming that tourists must travel to discover them. Tourists will not only feel happy and learn new, inspiring things but also find good friendship during such valuable journeys," she added. 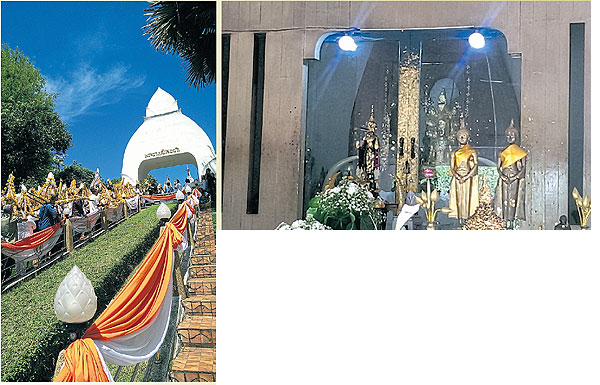 Located on the bank of the Man River in Dan Sai district, 83km from Muang Loei, is Phra That Si Song Rak. It was built in 1560 as a symbol of peace between Ayutthaya and Si Sattana Khanahut (Vientiane) on the orders of King Setthathirath of Si Sattana Khanahut and King Maha Chakkraphat of Ayutthaya. Both kingdoms vowed to establish peace and, if necessary, join forces to combat the invading Burmese under King Bayinnaung. Wearing red attire and red flowers to this sacred site is forbidden as the colour indicates violence. Another highlight at Wat Phra That Si Song Rak is a seated Buddha statue in the hall adjacent to the stupa. The statue is in the naga coverage posture in the Tibetan style, which is very rare in Thailand. 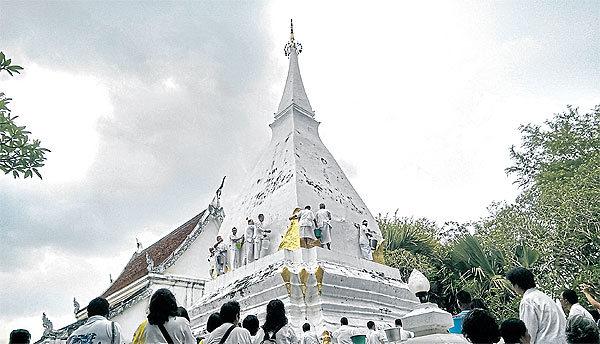 Every year on and around Visakha Bucha Day, three annual religious ceremonies are held — cleansing the stupa with water, ordaining Buddhist monks and pouring royal water onto the stupa, and presenting trees of beeswax to the stupa — at Wat Phra That Si Song Rak. The purpose is to request happiness, safety, rain and fertility. On the first day, Chao Por Kuan, a medium responsible for taking care of the stupa, and his followers climb the stupa to clean it with water and then locals and tourists pour water onto the stupa. However, women are not allowed inside the stupa. On the last day, which is the Visakha Bucha Day, worshippers present trees of beeswax flowers to Phra That Si Song Rak, join in the ordination ceremony and the stupa-worshipping ceremony and witness the lighting of sky rockets called bung fai. 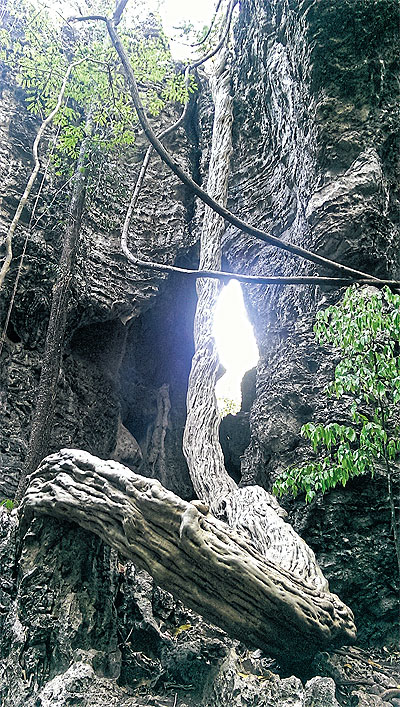 Phothisat Cave or Guilin of Loei is in a valley surrounded by tropical rainforests with more than 1,000 kinds of plants in Nong Hin district. The main cave consists of 15 caverns and is home to bats. Inside each cavern are stalagmites, stalactites and columns. Interesting attractions include the areas called Throne Hall, Natural Picture Frame, the City Pillar Stone, the Stone Flowers, the Thousand-Year-Old Vine, the Garland Cavern, the Emerald Cavern, Crocodile Eating Fish and petrified wood. The Throne Hall is a cavern with fine stones and columns that look like a Buddha statue and a statue of the fat Phra Sangkhajai, while the Nature Picture Frame is a huge banyan tree with extending roots in the shape of a photo frame. The Thousand-Year-Old Vine is a huge vine hanging from the top from a sinkhole onto a cavern. Visitors can also enjoy trekking a 500m nature trail. Local guides are available for 100 baht per group of no more than 10 visitors. Call the Puan Phu Administration Organisation on 042-810-820. 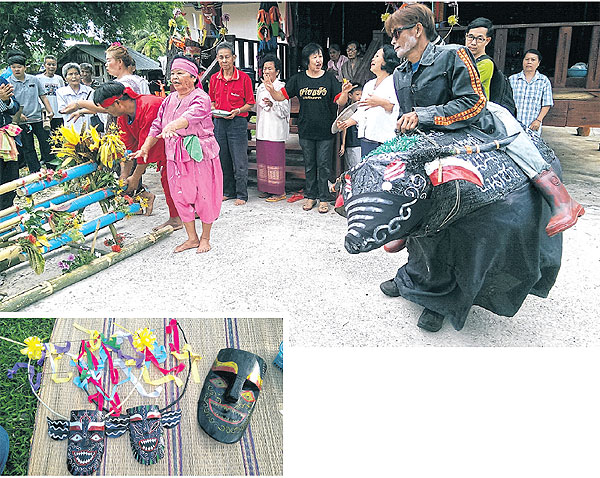 The Phi Khon Nam tradition is performed only in Na Sao sub-district of Chiang Khan. It dates back to more than 300 years ago and originated in Laos from where ancestors of local villagers had migrated. It consists of a ritual for locals to worship the spirits of their predecessors called Phi Pu Phi Ya and pray for protection and happiness, and a procession of dancing people wearing masks, which look like the heads of buffaloes. Earlier, such processions were called Phi Khon since their outfits were adorned with buffalo hair. Later, the word nam, or water, was added because there would usually be a downpour after the parades. 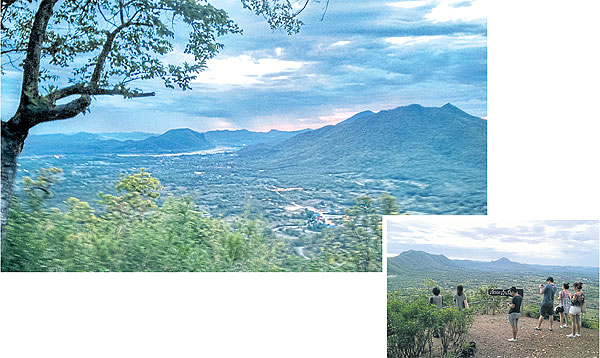 Phu Thok is 3km from Chiang Khan, where visitors can enjoy stunning panoramic views of the town and Mekong River. The best time to visit is between August and early February, 5.30-7.30am, when a sea of mist covers the mountain tops. 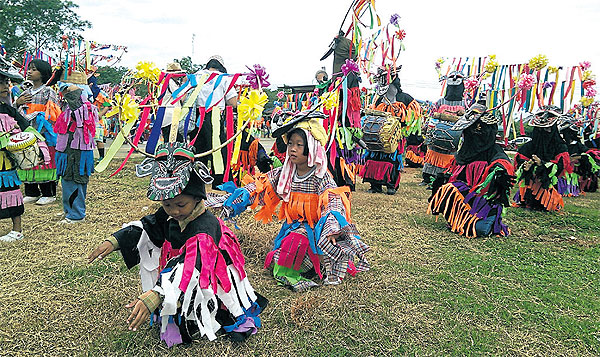 A day after Visakha Bucha Day, residents of Na Sao sub-district in Chiang Khan joyfully take part in a procession to bring flowers, candles and incense sticks to local temples in the hae dokmai khao pham procession as part of the Phi Khon Nam Tradition. A day later, the phi khon nam ceremony is performed. Villagers take to the streets in a procession by wearing buffalo-like masks and outfits to express their gratitude towards the spirits of buffaloes and oxen who work on their farms. 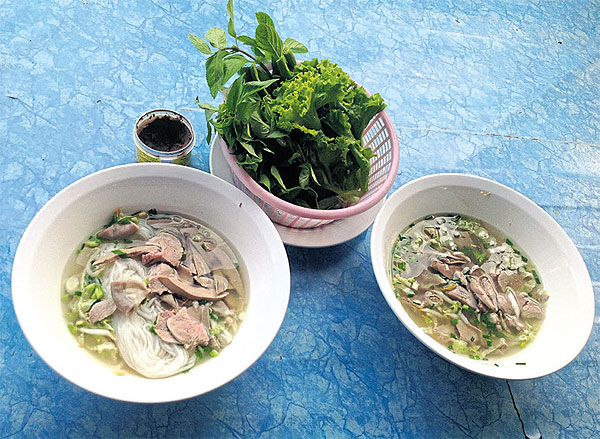 About 109km from Dan Sai district is Ban Suan Por in Phu Luang district. Tourists can ride boats on the Kaeng Yao Stream for about 6km and walk a few kilometres to see a rocky watershed area, which is the beginning of the Loei River. They can enjoy a delicious lunch on rafts in a lake under the Ban Suan Por Housewives’ project. A return boat trip costs 100 baht per person.

Pak Chom district is located on the banks of the Mekong River and opposite Meuang Muen in Vientiane province, Laos. Interesting attractions are Phu Hor, Nang Kwak beach, Wat Non Sri Sa-ard, the Naga Shrine and the Look Out by the Mekong River. From Phu Hor in Pak Chom Village visitors can see Pak Chom Municipality, the Mekong River and Laos, while Nang Kwak beach by the river is visible around March-April, when the water level is low. Wat Non Sri Sa-ard has a large wooden building with 50 huge pillars, while the Naga Shrine in Pak Chom Municipality Market is regarded as a sacred site by locals who worship the naga believed to reside in the Mekong River. 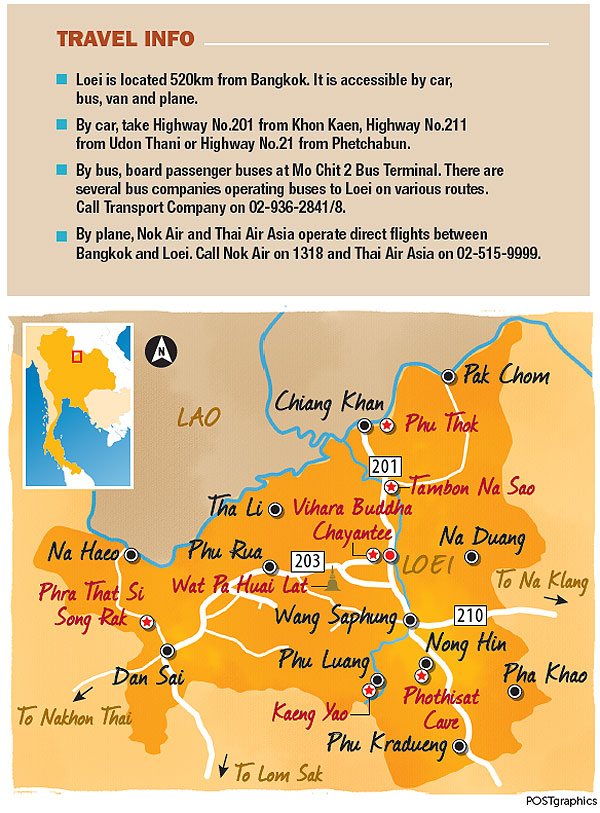