Sanders vows to 'work together' with Clinton
World

Sanders vows to 'work together' with Clinton

WASHINGTON - Thwarted presidential hopeful Bernie Sanders refused Thursday to bow out before the final Democratic primary next week, but said he would meet rival Hillary Clinton soon to foster party unity in the battle against Donald Trump. 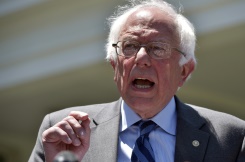 "I spoke briefly to Secretary Clinton on Tuesday night and I congratulated her on her very strong campaign," said Sanders, sounding conciliatory after an hour-long White House meeting with President Barack Obama.

"I look forward to meeting with her in the near future to see how we can work together to defeat Donald Trump and to create a government which represents all of us and not just the one percent."

The Vermont senator was at the White House for discussions on how to heal rifts in the Democratic party after a testy primary campaign, and head united into the looming showdown with the presumptive Republican nominee.

The meeting itself was a very public show of respect for Sanders' insurgent campaign.

The two men strode along the West Wing colonnade, both laughing at one point, with the president placing his hand on Sanders' back as he opened the door to the Oval Office.

"I thought that Bernie Sanders brought enormous energy and new ideas," Obama said Wednesday. "I thought it made Hillary a better candidate."

"My hope is, is that over the next couple of weeks, we're able to pull things together," Obama said, recalling his own bitter campaign rivalry with Clinton in 2008.

"What happens during primaries, you get a little ouchy. Everybody does."

Sanders told his defiant supporters that "the struggle continues" Tuesday, even after crushing defeats to Clinton in California and New Jersey.

Obama was always certain to back Clinton, his former secretary of state, but he has so far refrained from making any formal endorsement.

Sanders thanked Obama, and his vice president Joe Biden, for not putting their hands on the scale during the primary race.

He tapped a deep well of anger among young voters who were the lifeblood of Obama's victories in 2008 and 2012.

The risk for Clinton is that Sanders overplays his hand or feels shunned -- and continues his insurgency.

Some Sanders supporters would like him to battle all the way to the party convention in Philadelphia next month.

Sanders said that he "will, of course, be competing in the DC Primary which will be held next Tuesday. This is the last primary of the democratic nominating process."

For diehard Sanders supporters, Clinton -- the former first lady, secretary of state and US senator -- is the epitome of a political establishment that has failed the people.

More pragmatic supporters are pressing for Sanders to leverage his newfound political clout.

They would like to see the party platform overhauled and reforms to the next nominating process in 2020 -- opening primaries to independent voters and curbing the role of bigwig "superdelegates."

"The degree to which the party unites behind Secretary Clinton is ultimately going to depend on the degree to which she picks up and embraces the political revolution and runs on the populist progressive issues that have been defining the primary," he said.

Sanders indicated that while he and Clinton continue to vie to put their stamp on the party, they could unite to defeat a common foe -- Trump.

Sanders said Trump would be "a disaster as president of the United States."

"It is unbelievable to me, and I say this in all sincerity, that the Republican Party would have a candidate for president who in the year 2016 makes bigotry and discrimination the cornerstone of his campaign."

"Needless to say, I am going to do everything in my power -- and I will work as hard as I can to make sure that Donald Trump does not become president of the United States."

SONGKHLA: A student stabbed another student with a knife after they began brawling at an occupational college in Hat Yai district on Tuesday, following an exchange of provocative comments on social media, police said.