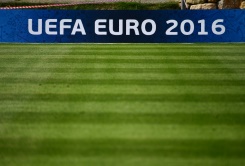 A banner reading 'UEFA EURO 2016' is pictured during a training session at the local stadium in Tourrettes, southeastern France, on June 9, 2016

"I will be paying close attention tomorrow and if decisions need to be made, they will be made," Hollande said Thursday on the eve of the tournament's opening match in Paris at the Stade de France between France and Romania.

Rail workers have threatened to strike on the lines serving the stadium.