Memorabilia is sold before Republican candidate for President Donald Trump speaks to supporters at a rally at Atlantic Aviation on June 11, 2016, in Moon Township, Pennsylvania. (AFP photo)

Henry Kravis, co-founder of KKR & Co LP, is more blunt: "Nobody can figure it out."

And Don Marron, chairman of Lightyear Capital LLC, captures what amounts to a collective shrug: "What do you say? 'It’s a mystery,' is what you say."

The question, the one being thrown at American executives in London, Hong Kong and Berlin -- and pretty much wherever else they go -- is this: How did Donald Trump become a serious contender for the United States presidency?

The answers, in public at least, are a mix of genuine befuddlement and careful messaging as Trump has gone from long shot to presumptive Republican nominee and is now closing the gap in national polls with Hillary Clinton, his Democratic counterpart. By courting support largely from low-income voters who feel left behind by economic forces, Trump has shaken up the 2016 race, caught executives by surprise and dominated the conversation in international business circles like no other US presidential candidate in recent memory. The contest heated up last night when President Barack Obama formally endorsed Clinton.

Apart from Amazon.com Inc CEO Jeff Bezos, who in December tweeted “#sendDonaldtospace” after Trump accused him of buying the Washington Post to keep his taxes down, few executives want to get in the middle of this wildly contentious election season. Why risk offending customers, let alone Trump and his almost 9 million Twitter followers or Clinton and her supporters? They also don’t want to let politics dominate business discussions.

Good luck with that. Privately, some executives say many colleagues and customers overseas are transfixed by this election season, and particularly by the Trump phenomenon. One U.S. banking official said he was bombarded non-stop with questions during a recent business trip to Hong Kong and Tokyo.

They asked, ‘Can he become president? Is this literally possible?’ said the executive, who, like many, spoke on the condition he not be named. That’s all they wanted to talk about, he added.

Investors are only beginning to assess the impact of a Trump or Clinton win in November. At Pacific Investment Management Co's secular forum last month -- when the firm brought in Ben Bernanke, Jean-Claude Trichet and Gordon Brown to talk about the long-term economic and market outlook -- they discussed Trump as a sign of rising anti-establishment sentiment in the US and Europe, said Pimco Group Chief Investment Officer Daniel Ivascyn. 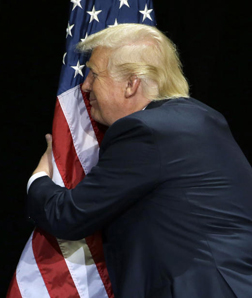 "We're spending some time on the implications of what a Trump presidency or a Clinton presidency might mean for the markets,” Ivascyn said. "We're cautious long-term. It's not specific to Trump."

As a global media frenzy rages over Trump's controversial statements -- from attacking a federal judge for his "Mexican" background to a promise he’d eliminate the $19 trillion US national debt -- astonishment at the prospect of a Trump presidency appears to be growing by the day.

Bob Dudley, the CEO of BP Plc, said queries about Trump, the man, crop up frequently but rarely does anyone ask about specific Trump programs or policies. "There are lots of questions around the world, but it’s usually not about energy policy," he said. "It's just a natural curiosity."

Christine Hurtsellers, the chief investment officer for fixed income at Voya Investment Management, which oversees $203 billion, says Trump often comes up in meetings. During a recent trip to Japan, Hurtsellers said she was asked about some of his contentious remarks.

"Clients look at you like, 'what are Americans thinking?'" she said. "International investors are certainly both curious and concerned about Trump’s rhetoric."

Having hosted dinners and lunches with clients all over the globe, Ken Fisher, the billionaire CEO of Fisher Investments, said Asians and Europeans are equally curious about Trump but regard him very differently.

"In Asia, uniformly they just don’t believe Mr. Trump can win," said Fisher, whose investment firm has more than $65 billion under management. For European high-net-worth clients, “there’s an underlying fear Trump might be this new rising nationalism that would cut off relations with their countries.”

Talk of Trump often provokes nervous laughter, said Allyson Stewart-Allen, chief executive of International Marketing Partners, a consultant with offices in London and Los Angeles. At a London awards ceremony she attended in May hosted by BritishAmerican Business, a transatlantic networking association of C-suite executives, she was asked to “explain Donald Trump."

"I said neither candidate is particularly representative of the US," she recalled, referring to Trump and Clinton. "There was laughter -- you know, guffaws. Kind of like when you share an inside joke."

Still, some executives are getting anxious about a possible Trump presidency, said David Gallagher, the London-based CEO for Europe of Ketchum, the global public-relations firm.

"I'm getting a lot of questions on how likely he is to be elected and usually some varying levels of amusement to horror that it’s even a plausible scenario," Gallagher said. "Usually I just say have faith in the system. Congress and the courts would balance out any wild variations in policy."

Gallagher, who holds dual US and United Kingdom citizenship and says he has raised money for the Democrats, likes to reassure executives with a bit of history. "I sometimes paraphrase Winston Churchill: Americans usually do the right thing but only after exhausting every other option."