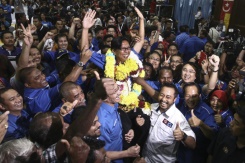 Supporters of the United Malays National Organisation (UMNO) hoist Budiman Mohamad Zohdi after he won a by-election in Sungai Besar, a coastal town outside Kuala Lumpur on June 18, 2016

The results in two mainly rural constituencies were largely expected, as support typically runs strong in such areas for the dominant United Malays National Organisation (UMNO).

The UMNO-led ruling coalition also enjoys huge advantages in money and machinery over a splintered opposition.

Both candidates also pulled off a thumping victory as predicted.

The contests -- held after the previous incumbents died together in a helicopter crash in May -- are the first parliamentary electoral contests since the corruption allegations emerged last year.

But for the second time in as many months, the results provided relief for Najib and his ruling Barisan Nasional (BN) coalition.

Last month, the BN scored a thumping victory in Sarawak state assembly polls to extend its decades-old control of that stronghold state.

"The victory in both the constituencies (on Saturday) will enable Najib to entrench himself as the powerful leader of UMNO," said Oh Ei Sun, a senior fellow at the S. Rajaratnam School of International Studies in Singapore.

It had faced candidates from the Pan-Malaysian Islamic Party (PAS) and Amanah, a new party comprising mostly former PAS members.

Experts say that likely split the votes of the Muslim ethnic Malays who are the country's majority group.

Najib faces allegations that billions of dollars were plundered from a state-owned investment fund he founded.

The accusations, which burst forth last year, include the revelation Najib received at least $681 million in deposits to his personal bank accounts in 2013.

But Najib has fuelled suspicions by shutting down domestic investigations and sidelining critics, while shoring up his hold on power.

Authorities in a half-dozen countries are investigating 1MDB money flows, however, and Switzerland and Singapore have frozen millions of dollars in assets.

Najib led the BN -- in power since independence in 1957 -- to its worst-ever showing in 2013 national elections amid voter concerns over the economy, corruption and alleged government repression.

Malaysia's opposition had sought to highlight the 1MDB issue in campaigning for Saturday's polls, but analysts say the issue carries little weight with masses of Malays who have been raised on UMNO control.