CAIRO - An Egyptian court on Saturday sentenced ousted Islamist president Mohamed Morsi to life in prison in an espionage trial in which six of his co-defendants were handed death penalties. 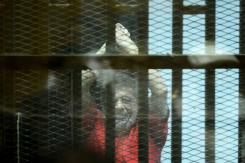 Egypt's ousted Islamist president Mohamed Morsi gestures from behind the defendant's bars during his trial on espionage charges at a court in Cairo on June 18, 2016

Morsi, who has been sentenced to death in a separate trial, was Egypt's first democratically elected president but the army overthrew him in 2013 and cracked down on his supporters.

He was given life in prison Saturday for leading an unlawful organisation and 15 years for having "stolen secret documents concerning state security," his lawyer said.

But Morsi was acquitted of having supplied classified documents to Qatar, one of his main backers, Abdel Moneim Abdel Maksoud told AFP.

The six defendants sentenced to death for helping to pass secret documents to Qatar include three journalists, two from Qatar-based TV channel Al-Jazeera, tried in absentia.

The media network denounced the verdict as an attack of free press.

The verdict is "unjust and politicised" and "part of the ruthless campaign against freedom of speech and expression, in order to muzzle the voice of free press."

Qatar's government also rejected the verdict, saying it was "unfounded, goes against truth and contains misleading claims" that are contrary to Doha's policies.

"The charge of espionage for Qatar against a former president and media men is surprising and unacceptable," added Ahmed Al Rumaihi, director of information at the foreign ministry.

Morsi came to power after the 2011 revolution that toppled longtime strongman Hosni Mubarak.

But after about one year in office, he was overthrown and detained by then-army chief Abdel Fattah al-Sisi, who is now Egypt's president.

Courts have since sentenced hundreds of Islamists to death, including other Muslim Brotherhood leaders, though many have appealed and been granted new trials.

Hundreds of Morsi supporters were killed during protests following his ouster. Thousands of others were detained in a crackdown that was later expanded to include leftist and liberal dissidents.

The Brotherhood has been blacklisted as a terrorist group.

Jihadists who have sworn allegiance to the Islamic State group intensified their attacks following Morsi's overthrow, killing hundreds of Egyptian policemen and soldiers, mainly in the north of the Sinai Peninsula.

The jihadists say the attacks are in retaliation for the crackdown on Brotherhood supporters.

The third has been named as Asmaa Mohamed al-Khatib, a female reporter with pro-Muslim Brotherhood news outlet Rassd.

The death sentences were sent to the mufti -- Egypt's official interpreter of Islamic law -- as his opinion is legally required on death sentences although it is not binding.

Rights group Amnesty International criticised the trial outcome as "appalling" and called for the death sentences to be overturned and for the "ludicrous charges" against the journalists to be dropped.

"Egypt's broken and utterly corrupted justice system is now little more than a handy tool for the authorities' repression of any vestiges of opposition or criticism," said Magdalena Mughrabi-Talhami, Amnesty's deputy director for the Middle East and North Africa.

The defendants can appeal the rulings before the court of cassation, and those tried in absentia can seek a retrial if they turn themselves in.

Egypt has cracked down on Al-Jazeera and imprisoned three of its journalists in Cairo, including Australian Peter Greste and Canadian Mohamed Fahmy, before releasing them by presidential decree.

Morsi has already received sentences in several other separate trials.

In 2015, a court sentenced him to death in connection with prison breaks and attacks on police stations during the 2011 uprising. He is appealing that verdict.

Morsi was one of the Brotherhood leaders who were jailed during the 18-day uprising, escaping with thousands of inmates who broke out of prison.

He has also been sentenced to life in prison for "espionage" on behalf of Iran and other countries, as well as militant groups Hamas and Hezbollah.

Another court sentenced him to 20 years in prison for clashes that erupted outside his presidential palace in December 2012 between his supporters and opponents, killing up to 10 people.

The clashes broke out after Morsi issued a decree placing his decisions above judicial review.

Millions took to the streets demanding his resignation before the military intervened to remove him.