WASHINGTON - Prince was having dinner on a flight home from his final public concert when he suddenly lost consciousness, according to the first published account of the pop icon's health crisis six days before his death. 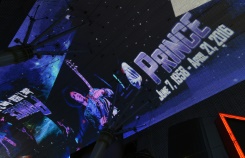 Judith Hill, an artist and protege of Prince, told the New York Times the two were chatting over dinner as they flew from Atlanta to Prince's home near Minneapolis when he suddenly lost consciousness Hill, 32, noticed that "his eyes fixed" just before he seemed to nod off shortly after 1 am (05

The April 15 episode prompted an unscheduled landing of his private plane and an emergency room visit, raising a sudden alarm over the state of Prince's health.

Judith Hill, an artist and protege of Prince who worked closely with him during the past two years, said in a New York Times interview that the two were chatting over pasta and vegetables as they flew from Atlanta to his home near Minneapolis.

"Thankfully, I happened to be looking into his face," and realized he was unconscious and not asleep, Hill was quoted as saying.

Hill and the only other passenger on the jet, Prince's friend and aide Kirk Johnson, tried unsuccessfully to wake up the 57-year-old.

They alerted the pilot, who radioed air traffic controllers in Chicago to report an unresponsive man on board.

"We knew it was only a matter of time; we had to get him down," Hill was quoted as saying. "We didn't have anything on the plane to help him."

The plane landed in Moline, Illinois, met by an ambulance on the tarmac.

Prince was revived with an injection of Narcan, a drug used to treat opioid overdoses, the report said. He was taken to a hospital for several hours before being released and traveling home.

Publicly, Prince blamed the emergency landing on a bout of flu.

Although initially reluctant to seek help following the scare, Prince undertook tests with a local doctor and connected with an addiction specialist in California, The New York Times said.

Prince was found dead at his Paisley Park estate on April 21. His death was ruled an accident caused by an overdose of fentanyl, a powerful opioid used to treat severe pain.

He had appeared healthy and was legendary for his marathon performances. But the artist underwent hip surgery in 2010.

Hill said that despite her close relationship with Prince, she had no idea he was in pain, calling the circumstances of his death "very shocking."