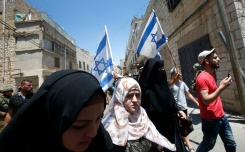 Israeli settlers (back) guarded by soldiers and police march in a street in the Israeli-occupied West Bank city of Hebron as Palestinian Muslims return from Friday prayers on July 1, 2016

The United States, European Union, Russia and the United Nations - which comprise the quartet -- said settlements, demolition of Palestinian homes and Israeli confiscation of land were "steadily eroding the viability of the two-state solution."

"Israel should cease the policy of settlement construction and expansion, designating land for exclusive Israeli use, and denying Palestinian development," said the report.

"This raises legitimate questions about Israel's long-term intentions, which are compounded by the statements of some Israeli ministers that there should never be a Palestinian state," it added.

The report's findings and recommendations are to serve as the basis for reviving the Israeli-Palestinian peace process that has been comatose since a US initiative collapsed in April 2014.

There has been growing alarm that ongoing violence and the construction of Jewish settlements on land earmarked to be part of a future Palestinian state are killing off prospects for a deal.

Since the beginning of the Oslo peace process in 1993, the settlement population has more than doubled, with a threefold increase in so-called Area C -- the most sought-after land in the West Bank, said the report.

There are currently at least 570,000 settlers living in the West Bank and east Jerusalem, which the Palestinians hope to make the capital of their future state. The United Nations has said settlements are illegal.

In the recent wave of violence since October, there have been over 250 attacks and attempted attacks by Palestinians that have killed at least 30 Israelis, said the report.

The report said that "regrettably," Palestinian leaders "have not consistently and clearly condemned specific terrorist attacks" while streets and squares have been named after Palestinians who have carried out the violence.

"The Palestinian Authority should act decisively and take all steps within its capacity to cease incitement to violence and strengthen ongoing efforts to combat terrorism, including by clearly condemning all acts of terrorism," said the quartet.

At least 140 Palestinians have been killed since October, the report says. At least 60 of them were killed by Israeli security forces during demonstrations, clashes or military operations.

Among the 10 recommendations outlined in the report, the quartet urged Israel to lift the blockade of Gaza and called for restoring Palestinian Authority control over the Hamas-ruled Gaza Strip.

In an interview with AFP ahead of the report's release, UN Mideast envoy Nickolay Mladenov said he hoped the findings would prompt both sides and world leaders to take action to revive the peace process.

"Certainly I would hope that this report would serve as a wakeup call," he said. "We can't leave this the way it is. We simply can't."

Mladenov, a Bulgarian diplomat who has served as the UN's Middle East coordinator for over a year, said both the Israelis and the Palestinians must act on all three tracks -- violence, settlements and Hamas rule in Gaza.

"Certainly we want action, on all fronts," said Mladenov.

"These are parallel trends that are happening as we speak and they are all in and of themselves causes of trouble."

Mladenov declined to say how long it might take to relaunch peace talks, but he argued that a return to negotiations was the only course of action.

"Endless occupation is a recipe for disaster" that will lead to a "perpetual lack of security and violence," he told AFP.

The Security Council is to decide whether to give its backing to the report, which was released as France is pushing for an international peace conference later this year.

French Ambassador Francois Delattre said the report and the Paris peace initiative are "complementary" and "mutually reinforce each other."

Russian activist, 80, fights on despite crackdown