BILBAO (SPAIN) - Luis Ortiz Alfau was 19 and working at a food warehouse when Spain's civil war began in 1936, as general Francisco Franco led an uprising against a democratically elected Republican government. 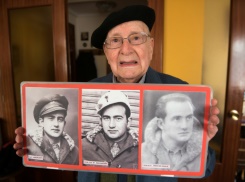 Luis Ortiz Alfau is one of the last surviving witnesses of the atrocities of the Spanish civil war, from the bombing of the Basque town of Guernica to the forced labour camps

Today almost 100, Luis is one of the last surviving witnesses of the atrocities of that conflict, from the bombing of the Basque town of Guernica to the forced labour camps.

"I joined a battalion of the Republican Left in the first days of August in Bilbao," he recalls at his flat in his hometown of Bilbao in northern Spain, surrounded by his archives and his computer.

"As the son of a Republican I had to join because they would surely call me up and I wanted to defend freedom and the legal Popular Front government," adds Luis, wearing a traditional round Basque beret.

Hundreds of thousands of people died in the war, which pitted the elected leftist government against Franco's right-wing Nationalist forces, backed by Hitler and Mussolini.

"We would practise with brooms... we didn't have rifles or any war material," says Luis, a 99-year-old widower who lives alone.

Luis refuses to be presented as a brave hero and says he never fired a single shot during the three-year war that began on July 18, the most devastating conflict in Spanish history.

"I was lucky to be assigned to the transmissions section. I was a living phone. I would go from the battalion command to the trenches with an envelope," he recalls.

"The messages would ask for weapons, they would say, 'We can't hold on' or 'We have had many casualties.'"

His battalion was resting in a neighbourhood in the Basque town of Guernica on April 26, 1937 when German planes dropped dozens of tonnes of bombs -- an atrocity that shocked the world and was immortalised in Picasso's haunting anti-war painting that year named after the town.

"We had to go out and collect the dead and wounded, everything was burning and full of smoke, I had never seen so much blood," he said.

Historians estimate as many as 1,600 people were killed when aircraft from Hitler's "Condor Legion" sent to Spain to support Franco's forces carpet-bombed the Basque town.

Franco blamed "red vandalism" -- a reference to Communists and other leftists -- for the destruction of the city.

In February 1939, Luis fled to neighbouring France where he experienced the hardships of the camps where Spanish Republicans -- deemed "undesirable" -- were confined.

Journalist Ander Izaguirre, who was asked by a Basque government institute to write a biography of Luis, says "what is impressive" about his life story is that he "passed through the most important places of the war and post-war".

When France entered World War II in September 1939 by declaring war against Germany, Luis -- like thousands of other Spaniards -- thought the time was right to return to Spain.

But he was arrested at the border and in June 1940 was sent to one of the 121 forced labour camps that were set up by Franco, according to British historian Antony Beevor, to punish the losing Republican side.

Luis likes to say that he is alive because he knew how to use a typewriter.

Thanks to this skill, he was assigned the job of scribe in the labour camp that was tasked to build a road through the valleys of the frosty Pyrenees mountains on the border with France in "inhuman conditions".

"I was privileged, I stayed with the officials in a small house, but the rank and file were in the outskirts in the barracks for livestock," he recalls.

"Some weighed just 38-40 kilos (83-88 pounds). They would eat vegetable peelings that were thrown to the pigs, even raw lizards."

Luis said he still feels "shame" for having contributed, against his own will, to the hunger the prisoners endured when his corrupt lieutenant demanded that he hand over part of the funds meant to buy food.

When he finally returned to Bilbao as a free man in 1943, Luis quickly realised that jobs were reserved for "those who had fought with Franco".

He only found work after he bribed a civil servant to eliminate his record as a former Republican fighter.

Luis, who will turn 100 on October 13, says he is "wonderfully happy" and pleased that he has the chance to bear witness in the name of the former "slaves of the Franco regime".

An amnesty law passed in 1977 -- two years after Franco's death -- pardons crimes committed during the war and dictatorship that followed.

But a judge in Argentina has opened an enquiry into Franco-era crimes and Luis was able to outline "everything that dead Republican prisoners can never tell".