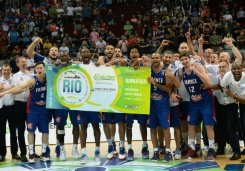 French national team members hold a huge mock plane ticket to Rio de Janeiro as they celebrate their win against Canada at the 2016 FIBA Olympic men's qualifying basketball tournament in Manila on July 10, 2016

The San Antonio Spurs point guard led all scorers with 26 points, sinking a dagger three and a layup plus five free throws in the last three minutes to put paid to Canadian Olympic ambitions.

Coach Vincent Collet later revealed Parker's partner was due to deliver their second child over the next few days and the player would fly to the United States to be with her when she gave birth.

France's joy at winning the qualifying tournament in the Philippine capital was tempered as the world's basketball governing body FIBA announced Sunday they had been drawn in a group containing the defending champions the United States.

"It's gonna be tough. There are a lot of good teams there," Parker said of the prospects for the French, who finished in sixth place at the 2012 London Olympics.

France's shooting guard Nando De Colo, who won the Most Valuable Player award at the Manila tournament, said the key to the win over Canada had been forcing their younger rivals to play the half-court game.

"We knew that they are very good players, they are athletic and they run the court, so the first one (coach) Vincent mentioned for that game was stop the fastbreak," De Colo said.

However the slasher Toronto Raptors guard also turned the ball over seven times.

Only 12 countries have qualified for the Rio Olympics men's basketball tournament starting on August 6.

Brazil automatically qualified as the hosts while the US got a place as the FIBA basketball World Cup champions and seven others were awarded a spot by becoming regional champions or runners up.

The last three slots were decided in three Olympic qualifying tournaments in the Philippines, Italy and Serbia on Sunday.

Alongside France, Croatia secured a place from the qualifying tournament in Italy; while Serbia also booked a ticket to Rio after beating Puerto Rico at home.

France and the US are in Group A, along with Venezuela, Serbia, China and Australia.

Spain, silver medallists for the past two Olympic Games, have been drawn in Group B with Argentina, Brazil, Lithuania, Croatia and Nigeria.

Collet said no one was being fooled by the decision of top National Basketball Association players like LeBron James and Stephen Curry to skip the Rio games, saying the Americans were still very strong.

"We want to go as far as we can go," said Collet, adding that being grouped with the United States would serve as a motivational factor for the French, silver medallists in the 2000 and 1948 games.

GENEVA: The World Health Organization said Wednesday that a variant of Covid-19 behind the acceleration of India's explosive outbreak has been found in dozens of countries all over the world.

Government Savings Bank (GSB) is aiming to lower the interest rate for car title loans to ease the burden on borrowers in this segment, says Vitai Ratanakorn, the bank's president and chief executive.