FRANKFURT - Germany issued a 10-year bond at a negative interest for the first time on Wednesday, selling more than 4.0 billion euros ($4.5 billion) with a yield of minus 0.05 percent, the German central bank or Bundesbank said. 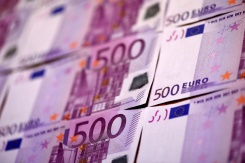 Germany's Bundesbank sold more than 4.0 billion euros ($4.5 billion) in bonds with a yield of minus 0.05 percent

The 10-year German government bond or "Bund" acts as a benchmark on the debt markets and regarded as one of the safest investments.

It is the first time that investors have accepted negative returns in the first issue of a bond, meaning they will pay for the privilege of owning rock-solid German bonds amid fears about the consequences of the British vote to quit the European union and economic worries.

While borrowers traditionally pay interest on the money they are loaned, in the face of heightened political and economic uncertainty, those interest rates have come down to record lows recently as investors flock to safe havens to park their cash.

By accepting negative yields, investors are effectively ditching any hope of a return on their investment in what seems a reasonable price to pay to escape the uncertainties of falling stock markets or volatile commodities and currencies.

Interest rates on sovereign debt have been low for some time as central banks snap up government bonds from investors in an effort to boost economic growth through increased liquidity.

The European Central Bank has slashed its key interest rates to zero and launched a massive bond-buying programme known as quantitative easing (QE) in a bid to get the eurozone economy back on its feet and push inflation higher.

Germany is just one of three countries in the euro area and six in the European Union to enjoy a top-notch triple-A rating on its sovereign debt.