JUBA - The United Nations warned Wednesday of the risk of fresh fighting in South Sudan after days of deadly gun battles that have sent thousands of people fleeing and prompted the urgent evacuation of foreign nationals. 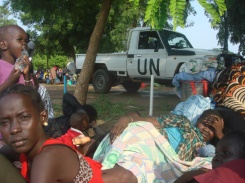 Displaced residents take shelter at the UN compound in the Tomping area of South Sudan's capital Juba on July 11, 2016.

Fears of a humanitarian crisis were growing with aid agencies -- themselves forced to restrict their work because of the security situation -- saying there were shortages of food and water.

A fragile ceasefire nevertheless appeared to be holding in the capital Juba for the second day after a sudden flare-up in fighting last week that threatened to drive the world's newest country back into all-out civil war.

As the guns remained silent, President Salva Kiir said he was granting an amnesty, with effect from Wednesday, to the ex-rebels loyal to longtime rival Riek Machar who battled government troops in Juba over four days.

"We remain very worried about the potential for the resumption of violence and spill-over into other parts of the country, as we have seen in the past," he said.

Thousands of South Sudanese were clamouring to cross the border into Uganda, while Germany and Italy said they were evacuating their nationals and other foreigners.

The United Nations said around 36,000 people had fled their homes for the perceived safety of UN bases, churches and aid agency compounds since the unrest erupted on Friday.

"There are bodies in the streets, shops have been looted, markets closed, people are queueing for food and families are desperately trying to leave the city," said Peter Walsh, South Sudan country director for charity Save the Children.

In Nimule, the closest border point 200 kilometres (120 miles) to the south of Juba, UN refugee agency officials estimated as many as 20,000 people may be seeking to cross into Uganda.

Those who made it across said South Sudanese soldiers were preventing people from crossing, or relieving them of their possessions before allowing them to pass.

"I only kept two cooking pots, the clothes the children and I were wearing, and one change each, and my handbag," said Mary Modo, a 40-year-old mother of five.

Evacuation flights for foreign nationals were able to leave the international airport in Juba, although commercial flights were not expected to resume until Thursday.

More people ventured on to the streets of the capital, which lies on the banks of the White Nile, but many remained cautious.

"No gunshots today. I have seen no tank, no helicopter," said a resident who did not want to be named. "There are a lot of soldiers and policemen in the streets patrolling."

The violence marks a fresh blow to last year's deal for ending the bitter conflict which erupted in December 2013 when Kiir sacked Machar, accusing him of plotting a coup.

Kiir is a member of the Dinka tribe, while Machar is a Nuer, and the dispute has split the country along ethnic lines.

The August 2015 agreement paved the way for Machar's return to the capital in late April to take up the deputy post again in a so-called unity government.

Machar was permitted to return with around 1,400 lightly-armed former rebel soldiers and Kiir was supposed to retain no more than 3,400 armed forces, with the city being otherwise "demilitarised".

However, during the fighting, tanks, helicopter gunships and anti-aircraft guns were all deployed.

The overall death toll is not known but around 300 were killed in just a few hours on Friday, including two Chinese UN peacekeepers.

Adama Dieng, the UN Special Advisor on the Prevention of Genocide, said some civilians "were reportedly targeted based on their ethnicity".

The catastrophic impact of the civil war in a country that only won independence from Sudan five years ago has been worsened by the latest fighting.

"Three-quarters of the population of South Sudan is in need of humanitarian assistance," the head of the UN's World Food Programme, Ertharin Cousin, said in Amman.

"This latest conflict is going to push even more people into hunger and despair."

Jan Egeland, secretary-general of the Norwegian Refugee Council, said his organisation had been forced to halt relief work due to insecurity, while some other aid agencies have begun evacuating non-essential personnel.

"Unless the ceasefire holds, the humanitarian situation that is already critical is likely to become worse," he said.

"We cannot help South Sudan if their leaders are not willing to join forces to build their own nation."

Despite being acquitted of seeking to overthrow the constitutional monarchy, the Future Forward Party is not out of the woods yet.

NEW YORK - Boeing officially pushed back the timeframe for the 737 MAX to return to the skies, sending shares plunging.

The government is considering whether to impose a ban on personal car use in affected areas to cope with high levels of PM2.5 dust particles.