Executives of messaging app Line ring the opening bell for their company's IPO at the New York Stock Exchange, as initial shares surged by a third in early trading. (AP photos)

NEW YORK - Shares in the Asian hit messaging app Line, Thailand's favourite smartphone app, surged 27% in New York Thursday and 32% on the Tokyo bourse in the markets hungry for the newest technology IPO.

The shares began trade on the Tokyo Stock Exchange, and on the New York Stock Exchange as ADR depositary receipts under the ticker sign "LN".

Based on the closing price, Line is valued at 912.4 billion yen ($8.6 billion). Upon its debut on the Tokyo bourse, it took roughly an hour and a half for Line to get its initial price of 4,900 yen, reflecting strong buying demand from investors.

Line shares lost momentum later in the day in Tokyo with some traders selling to convert to cash, but they are likely to remain well supported by the growth potential of the firm that has so far obtained more than 200 million users worldwide, analysts say.

Line became the first Japanese firm to simultaneously go public on the New York and Tokyo bourses, apparently aiming to boost the name recognition of its namesake social networking application beyond its core markets in Asia.

“The overall market environment isn’t too bad, and as New York debuted strongly, we’re seeing it being bought here too,” said Yoshihiro Okumura, general manager at Chiba-Gin Asset Management Co. “A lot of the buying is coming from retail investors.”

But Line remains challenged to boost its popularity beyond East and Southeast Asia, and some Spanish language markets, amid a field crowded with innovative mobile messaging services like Facebook Messenger, WeChat, WhatsApp, Skype and Snapchat.

Founder and chief executive Jungho Chin told the US business CNBC-TV network Thursday that the company now dominates the Japanese market and that the IPO will boost its expansion.

"Ultimately we believe that this IPO will accelerate our growth," he said.

Mr Chin told CNBC that the company's aim right now is to expand Line's functionality rather than focus on building it in other countries.

"The short-term view will be to focus on expanding the domain, and not so much the geographical expansion." 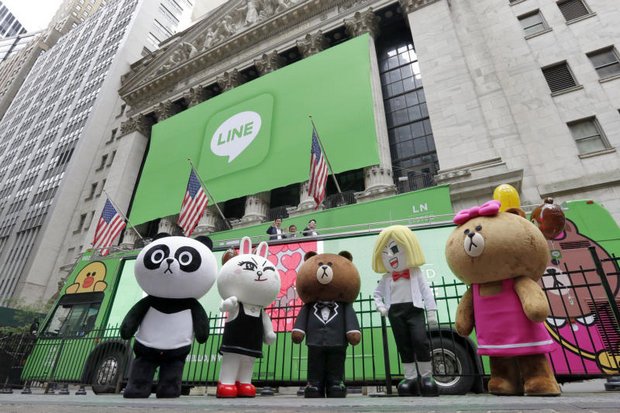 Sticker-characters "Line" up in front of the Line bus parked at the New York Stock Exchange on Wall Street an hour before trading began.

Priced at the high end of its original estimates amid heavy demand, Japan-based Line raised about $1.3 billion in the share flotation.

Known for its cute and innovative digital stickers, Line is hugely popular across much of East and Southeast Asia and is widely used in Spain and Mexico as well.

It counts about 218 million active monthly users, and is strongest in Japan, Thailand, Taiwan and Indonesia.

It lets users make free calls, send instant messages, and post photos or short videos, along with a host of other paid services. Games and a mobile payments function are also on offer.

It is best known for letting users send each other cute cartoon "stickers", and is hugely popular among teenagers.

Line's sells thousands of the stickers, many of them animated and noisy, from Hello Kitty and Super Mario to Manga and Disney characters.

One service allows users to create and sell their own characters, while Line's homegrown stable of stickers include the duck Sally, a sad-face bear called Brown and Cony the rabbit.

"The stickers are so good at explaining how we feel," Nanako, a 25-year-old tech industry worker from San Francisco, said at the retail store in Tokyo's youth fashion district.

Last year, Line posted revenue of 120 billion yen (39.88 billion baht, $1.1 billion), up 40% from the year before, but a small overall loss, which it blamed on rising staff costs and other expenses.

Line said it would use proceeds of the stock offering to help it expand in Asia, and tap the US and European markets where it is not yet a major player.

It also said the funds could fuel takeovers of other services and apps.

US to charge ex-Boeing pilot over 737 MAX crashes: report