LOS ANGELES - In less than a decade she has become the most influential woman in Hollywood, but such is Jennifer Lawrence's reach that her presence is now felt in films she's not even part of. 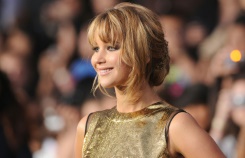 "Star Trek Beyond" writer Simon Pegg revealed Jennifer Lawrence was the inspiration behind Jaylah, an all-action alien addition to the sci-fi franchise

"Star Trek Beyond" writer Simon Pegg revealed Thursday that the 25-year-old actress was the inspiration behind Jaylah -- an all-action alien addition to the sci-fi franchise, played by Sofia Boutella.

"In the writing room (we) wanted to create this very independent female, very resourceful character... and we didn't have a name for her so we used to call her 'Jennifer Lawrence In Winter's Bone,'" said the 46-year-old Briton.

"So then we started calling her 'J-Law' and then she became Jaylah, so Jaylah is basically named after Jennifer Lawrence in 'Winter's Bone.'"

The latest installment in the "Star Trek" series hits US theaters on July 22 and the cast and crew appeared before the international media in Los Angeles to talk writing room rows, diversity and absent friends.

One of the biggest controversies in the run-up to its release has been the decision to give central character Hikaru Sulu a male lover.

US actor turned media personality George Takei, who played Sulu in the 1960s series and early films, told the Hollywood Reporter the twisting of the character's sexual identity was "really unfortunate."

In a lengthy clarification posted on Facebook on Wednesday, the openly gay 79-year-old said he wasn't disappointed that there was an LGBT character in "Star Trek" -- just that Sulu had been picked.

Comedy actor Pegg, who plays ship's engineer Scotty and took on scriptwriting duties for the latest movie, dismissed the row as the result of people liking "to make things into a spat."

"George and I email all the time -- big, long, lovely discussions about it and we're on great terms," he said.

"We were never shouting at each other or anything like that. And it's a great discussion to have. I'm really happy with the way it's been talked about and responded to and I'm still a huge fan of GT."

Korean-American actor John Cho, who plays Sulu in the rebooted trilogy, told reporters that when he first heard that Sulu was to be given a gay backstory he "thought it was a beautiful idea."

Pegg revealed that the main controversy for him had been director Justin Lin's early decision to destroy the starship Enterprise near the beginning of the film, although he was eventually convinced it was a good idea.

The run-up to the release has been overshadowed by last month's death of cast member Anton Yelchin, who played Pavel Chekov.

Cast members including Karl Urban and Zoe Saldana, who wiped away tears, paid tribute to the Russian-born actor, who was found pinned by his SUV against a brick mailbox pillar at his California home. He was just 27.

"The pain of loss is still very raw... This film will forever be the most special experience for all of us," said Urban.

"It represents a golden period when our family was fully together for the last time. And it really was the best summer of our adult lives."

Hope for change, prayers for peace as Kenya votes