LISBON - Portuguese Finance Minister Mario Centeno pinned his colours to the mast, donning a green and red scarf as his countrymen lifted the European Championship trophy. 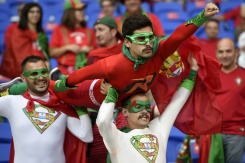 Portugal had two reasons to celebrate winning the European Championship trophy, a maiden win at senior level and a boost to tourism in the cash-strapped nation

EU colleagues in Brussels congratulated him as he lauded the Seleccao's final win over tournament hosts France in Paris.

But the Lisbon government had two reasons to celebrate -- not just a maiden win at senior level but also one that will give tourism in the cash-strapped nation a much-needed shot in the arm.

The European Commission, the EU's executive arm, must decide on sanctions of up to 0.2 percent of GDP over the next fortnight after Lisbon and Madrid were found not to have taken "effective action" to bring deficits back under the bloc's limit of 3.0 percent of gross domestic product (GDP).

In Portugal's case, the fine could top 360 million euros ($400 million) -- a tough ask in a country that racked up a budget deficit of around 8 billion euros last year.

That was 4.4 percent of GDP, down from the near 10 percent of GDP the deficit hit in 2010, the year before Portugal was forced to seek a 78-billion-euro international bailout.

Star player Cristiano Ronaldo -- whose overall income Forbes put at $88 million last season -- and his teammates may not be able to turn the economic ship around on their own.

But Portugal's triumph in Paris netted them not just $25.5 million in UEFA prize money, but has also bolstered the national economy by boosting tourism, to say nothing of the feel-good factor.

"The Portugal brand has gained in stature, the name of the country has been mentioned countless times. The government could never have afforded such an advertising marketing campaign," Daniel Sa, director of the Portuguese Marketing Institute (IPAM), told AFP.

- Boost but no miracle -

IPAM puts the potential boost to the economy on the back of footballing glory at 609 million euros.

"People eat, drink, move about -- that's consumption which wouldn't have existed without the Euros," said Sa amid celebrations which made the 2011 bailout in order to stave off national bankruptcy seem like ancient history.

"This is a turning point in our country's history," said Nuno Brito, a jobless 39-year-old who turned out to cheer the team on their arrival home.

Sa cautioned that while the win will bolster investor confidence "it won't by any means resolve the country's problems."

Domingos Amaral, a sports business professor, said "the country is groaning under financial problems -- there won't be any economic miracle thanks to the football".

Economics professor Joao Cesar das Neves warned that after Greece won the Euros at Portugal's expense in 2004 that "Greece then suffered one of the worst financial disasters in history."

But success on the pitch is still good news -- and not just for the 23 players who will each pocket a 300,000-euro bonus.

Sports shops are doing a roaring trade, not least in 140-euro replica shirts which have sold out.

Not everyone is happy, though. "I was ready to pay even more for a Portugal shirt -- but they've all gone," said Ali Kabli, a Kuwaiti tourist visiting the Nike Store in the historic Lisbon district of Chiado.

Boeing to deliver last 747, the plane that democratised flying

Calling all Blinks in Bangkok and beyond -- a Blackpink concert exhibition with pop-up shop is now on display at ICONSIAM.