BERLIN - Germany warned Turkey on Monday against reinstating the death penalty, as it blasted "revolting scenes of caprice and revenge" in the wake of a failed coup attempt. 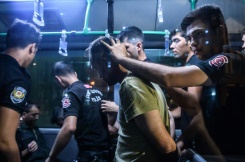 Turkish anti-riot police detain a soldier who allegedly took part in a military coup in Istanbul on July 16, 2016

After Erdogan said Sunday that Turkey would consider a return of capital punishment, Seibert said such a move "would mean the end of EU membership talks".

Seibert said the EU was a "community of laws and values" with which capital punishment was not compatible.

He urged a proportionate response from the government in Ankara.

"In the first hours after the failed coup, we witnessed revolting scenes of caprice and revenge against soldiers on the streets," Seibert said. "That cannot be accepted."

Seibert reiterated that Germany "condemns" the attempted takeover but stressed that the response by the Turkish government needs to be "proportionate" and "based on the rule of law".

"In that context, we need to say clearly: it raises profound and worrisome questions when on the day after the coup attempt, 2,500 judges are removed from their posts," he said.

In the aftermath of Friday's failed coup, thousands of Erdogan supporters called for capital punishment to make a return.

"In democracies, decisions are made based on what the people say. I think our government will speak with the opposition and come to a decision," Erdogan said Sunday.

Reinstatement would create further issues between the EU and Ankara in the already stalled membership talks.

Germany has the largest ethnic Turkish community outside Turkey with some three million members.

MCOT 'not insolvent' as cash shrinks

State-owned broadcaster MCOT is going through a liquidity crunch but is not insolvent, says a source at the Finance Ministry who requested anonymity.