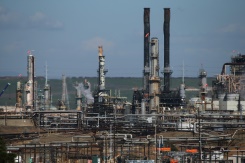 Under the agreement, Texas-based Tesoro and Par Hawaii Refining will spend about $403 million to install and operate pollution control equipment at six refineries across the United States.

Tesoro will also spend about $12 million to fund environmental projects in local communities that were impacted by pollution and will pay $10.4 million in civil penalties, the government said.

"This settlement... will benefit the air quality in communities across the Western United States," said John Cruden, assistant attorney general for the Justice Department's Environment and Natural Resources Division.

Par Hawaii currently operates one of the refineries affected by the settlement and formerly owned by Tesoro.

The company said in a statement that Tesoro is obligated to reimburse it for upgrades to reduce pollution at that facility in Kapolei, Hawaii.

The other refineries covered by the settlement are located in Alaska, California, North Dakota, Utah and the state of Washington.

The Justice Department said the pollution control measures to be put in place at those facilities will reduce emissions, improve air quality and cut the risk of respiratory illnesses for the local populations.

It said the settlement will also reduce greenhouse gas emissions from flaring at the refineries by over 60 percent.

"The advanced technologies Tesoro and Par are required to implement are the future for protecting people from toxic air emissions," said Cynthia Giles, assistant administrator for the EPA's enforcement and compliance assurance.

"This settlement puts new enforcement ideas to work that will dramatically cut pollution and protect communities."

SEOUL: The mayor of Seoul, a former human rights lawyer and potential South Korean presidential candidate, died in an apparent suicide a day after being accused of sexual harassment.