Baton Rouge, scene of latest US shooting, a city divided

BATON ROUGE (UNITED STATES) - The black-white divide in this city scarred by the latest racially charged killing in America is easy to see: just take a walk. 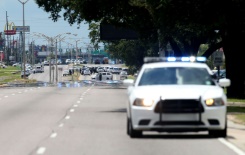 The streets in the mainly white south of Baton Rouge are clean, with carefully tended parks and lawns, modern buildings and good hospitals.

But the black part of town in the north looks like something out of the developing world. It is decaying, with lots of offices for ambulance-chasing lawyers, pawn shops and stores selling second-hand goods.

There are also plenty of businesses that, for a fee, will lend money to post bond for someone in jail.

It was in Baton Rouge where Gavin Long, a black former Marine and Iraq war veteran, shot and killed three law enforcement officers on Sunday before being killed himself.

His motive remains unclear, but the violence immediately recalled the July 7 ambush in Dallas. There, a black gunman furious over the recent deaths of two black men at the hands of police killed five officers.

One of those black men was shot dead by police in Baton Rouge.

If America was on edge after Dallas, it is positively beside itself after the latest Baton Rouge violence, which also prompted much soul searching on race relations in the capital of Louisiana.

As is almost certainly the case in many other US cities, blacks here feel they live under de facto segregation while whites say racism is a thing of the past.

"Despite the calls for greater equity in the criminal justice system, educational system, economic development, etc., some people are under the illusion that there are no racial problems in the city," said Lori Martin, a sociologist specializing in African-American relations at Louisiana State University.

"For people who recognize that racial inequalities exist in Baton Rouge, many tend to blame individuals and not institutions," she added.

That kind of belief -- that racial violence is committed by individuals and does not stem from systemic factors like racism -- underlies some people's attempts to explain Long's attack.

To wit: he acted alone, not in conjunction with any group or other people. And he was not even from Baton Rouge, but rather traveled here from Kansas City, Missouri.

At a makeshift memorial at the gas station where the police shootout with Long unfolded, a white woman who did not want to give her name said this of African-Americans: "They believe the police are killing them on purpose. I do not believe that."

Pastor Johnny Green of the Healing Place Church in the white part of town insists that talk of a racial divide is just wrong.

"Our community is very tightened. What you see in the media is not the truth as far as race relations," he said.

Some 200 white people attended a memorial service Monday evening at his church. They murmured amen when the pastor urged them to love their neighbor.

One of those in attendance, 66-year-old Linda Furr, said: "I really believe it's not a racial problem. It's a heart problem."

"I do not believe we have a racial problem here," she added.

Blacks say that kind of comment shows that whites in Baton Rouge are living in denial.

It was in the dilapidated north of the city where Alton Sterling, a black man, was shot and killed by police outside a convenience store two weeks ago.

Bouquets of flowers left at the entrance are still there. A picture of Sterling's face, rendered in spray paint, decorates a wall.

While Long's motivation remains unknown for now, police have said he was in town looking for places to target police.

In 2015, Long legally changed his name to Cosmo Ausar Setepenra, claiming to be a member of the Washitaw Nation, a group of African-Americans claiming to be a Native American nation in the United States.

Many blacks here seem convinced that he acted to avenge the death of Sterling, in effect mimicking the Dallas ambush.

"I think people are in denial in Baton Rouge about the racial issues that we have and I think that people after this tragedy, the narrative that the shooter was from outside of Baton Rouge, ignores the racial issues," said Anthony Nelson, 26, a black community activist.

"Our experiences every day are completely different" from those of people living in the white part of town, he said.

In Louisiana in 2015, the jobless rate among blacks was twice that of whites -- 10 percent compared to 5.2 percent. The proportion is similar in most American states.

The school drop-out rate in Louisiana makes it 43rd out of the 50 states, according to the Schott Foundation for Public Education.

And Baton Rouge is the most segregated city in America after Atlanta, according to the Institute for Southern Studies.

Martin, the university professor, said Black Lives Matter -- which arose in recent years in response to police killings of blacks -- is not a fad but rather part of an evolution that has included the work of Martin Luther King Jr.

"People have been responding for many years and many generations. Many people understand the movement did not finish with MLK, but is an ongoing movement," Martin said.

Eleven sentenced to death in Tanzania over conservationist's murder

The Pollution Control Department aims to reduce the number of heavily polluted days in metropolitan Bangkok and 17 northern provinces by 10% next year.

CHIANG MAI: A 63-year-old American tourist was safely rescued after he fell unconscious and had no pulse while a plane made a landing at Chiang Mai International Airport on Friday.