PARIS - Europe's medicines watchdog said Friday it has recommended the licensing of the first-ever AIDS prevention pill for the European Union. 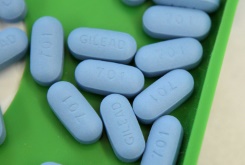 Dubbed Truvada, the pill combines two drugs and is already used in Europe and elsewhere in the world as part of AIDS treatment, and is approved in the United States, Kenya and South Africa as a preventive "pre-exposure prophylaxis" or PrEP.

Now the European Medicines Agency (EMA) has also "recommended granting a marketing authorisation in the European Union for Truvada... for pre-exposure prophylaxis."

The medicine must be used "in combination with safer sex practices to reduce the risk" of picking up HIV, it added.

PrEP is a way for people at high risk of infection -- including men who have sex with men, and heterosexual couples of whom one partner has the virus -- to lower their chances of getting HIV.

In one study, risk was lowered by 42 percent in homosexual men, and another by 75 percent in heterosexual couples with one HIV-positive partner.

The recommendation of the EMA's Committee for Medicinal Products for Human Use (CHMP) will be forwarded to the European Commission, the EU's executive arm, for approval.

Each member state will then take a decision on price, and whether or not it will be covered by national health systems, said the EMA.

EU member France already announced last November it would make the drug available as PrEP for free, under a temporary national authorisation.

Truvada is manufactured by US pharmaceutical group Gilead.

With no vaccine or cure for AIDS, the focus remains on prevention.

Yet, a study released this week said about 2.5 million people a year are still becoming infected with the AIDS-causing virus.