BEIJING - China has completed production of the world's largest amphibious aircraft, state media has said, the latest effort in the country's program to wean itself off dependence on foreign aviation firms. 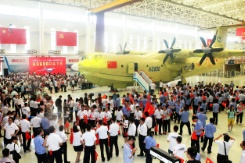 Crowd gathers at a ceremony to unveil the AG600 amphibious plane in Zhuhai, southern China's Guangdong Province, on July 23, 2016

The state-owned Aviation Industry Corporation of China (AVIC) unveiled the first of the new planes, dubbed the AG600, Saturday in the southern port city of Zhuhai, the official Xinhua news agency reported.

The aircraft, which has a maximum range of 4,500 km (2,800 miles), is intended for fighting forest fires and performing marine rescues, it said.

At around the size of a Boeing 737, it is far larger than any other plane built for marine take off and landing, Xinhua quoted AVIC's deputy general manager Geng Ruguang as saying.

However, its wingspan is considerably smaller than that of the H-4 Hercules, known as the Spruce Goose, which was designed in the 1940s to carry Allied troops into battle. It is regarded as by far the largest seaplane ever built although it only ever made one flight, in 1947.

The Chinese plane, which is targeted at the domestic market, will be "very useful in developing and exploiting marine resources," the article said, adding that it could be used for "environmental monitoring, resource detection and transportation".

Beijing is currently locked in disputes with several of its neighbours, including Japan, Vietnam and the Philippines, over the rights to develop economic resources in waters off its shores.

The AG600 could potentially extend the Asian giant's ability to conduct a variety of operations in the South China Sea, where it has built a series of artificial islands featuring air strips, among other infrastructure with the potential for either civilian or military use.

Xinhua said AVIC has received 17 orders for the plane so far.

China is seeking to develop its own aviation sector to reduce dependence on and even challenge foreign giants, such as European consortium Airbus and Boeing of the United States, though analysts say it could take years.

Despite a history of delays and problems, China's aviation industry has made rapid progress in the last year.

In June, the Chinese-made ARJ21 -- which stands for Advanced Regional Jet for the 21st century -- made its first commercial flight, when Chengdu Airlines flew one from its home base to Shanghai, and the country's military began using its homegrown Y-20 heavy transport plane earlier this month.

Filipinos flock to cemeteries ahead of All Saints' Day closure