ANKARA - Turkish authorities on Monday issued arrest warrants for over 40 journalists in a new phase of the controversial legal crackdown after the failed coup, as President Recep Tayyip Erdogan was to host opposition party chiefs for an unprecedented meeting. 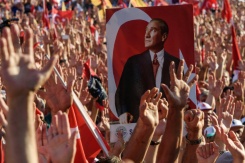 Demonstrators hold a portrait of Mustafa Kemal Ataturk, founder of modern Turkey, in Taksim Square in Istanbul on July 24, 2016

Over 13,000 people have been detained so far in a vast sweep in the wake of the July 15 coup bid, which the authorities blame on the reclusive US-based Islamic cleric Fethullah Gulen.

Istanbul anti-terror prosecutors issued arrest warrants for 42 journalists as part of the investigation into the failed coup, the state-run Anadolu news agency said.

Among those targeted by the warrants were prominent journalist Nazli Ilicak who was fired from the pro-government Sabah daily in 2013 for criticising ministers caught up in a corruption scandal, it added.

There was no indication any of the journalists had been detained so far.

The government blamed the 2013 corruption scandal on Gulen, with some officials at the time calling it a coup bid aimed at ousting the president.

Erdogan's government had been under fire even before the failed putsch for restricting press freedoms in Turkey, accusations the authorities strongly deny.

In new raids on Monday, police detained some 40 suspects at the army's military academy on the European side of Istanbul, Anadolu reported.

A female fighter pilot detained over the plot, Kerime Kumas, has confessed to landing a helicopter with rebel soldiers on board on the pitch of Besiktas football stadium during the coup night but insisted she had no idea a putsch was in progress, the Dogan news agency said.

Amnesty International in London claimed it had "credible evidence" of the beating and torture of post-coup detainees but a Turkish official vehemently denied the accusations.

Turkey has undergone a seismic shift since the night of violence when renegade soldiers sought to topple Erdogan but were stopped by crowds of civilians and loyalist security forces. At least 270 people were killed on both sides.

The authorities have announced they will disband the 2,500-strong Presidential Guard, almost 300 of whose members have been detained.

The length of time suspects can be held in custody without charge has been extended from four days to one month under a state of emergency that has caused alarm in the EU.

The government says the stringent measures are needed to clear out the influence of Gulen from Turkey's institutions, claiming that he has created a "parallel state" inside Turkey.

Gulen, 75, who lives in a compound in rural Pennsylvania and whose foundation runs a global network of schools, charities and media interests, has strongly denied the accusations.

Erdogan, whose Justice and Development Party (AKP) holds the majority in parliament, was to host the leader of the Republican People's Party (CHP) Kemal Kilicdaroglu and Nationalist Movement Party (MHP) chief Devlet Bahceli from 1100 GMT.

The talks at his presidential palace -- the first such meeting during his term in office -- comes after thousands of Turks of different political stripes massed in Istanbul on Sunday to denounce the coup in a rare show of unity.

However, in a sign that the harmony is not complete, the head of the pro-Kurdish Peoples' Democratic Party (HDP) Selahattin Demirtas has not been invited.

But the fact the meeting is taking place at all signals a major turnaround in the polarised world of Turkish politics, in particular for Kilicdaroglu who had vowed never to set foot in Erdogan's new palace, which he had denounced as illegal.

The CHP had on Sunday called the mass rally in Istanbul's Taksim Square and, to signal a united stand against the coup plotters, the demonstration was also backed by Erdogan's AKP.

"No to the coup!" said the headline in the Hurriyet daily above a picture of many thousands filling the vast urban space.

Erdogan supporters late Sunday kept up a "vigil" for democracy ordered by the president by filling city squares across the country.

The president has told his supporters to remain in the streets until further notice, warning of the danger of another coup.

In the northwestern city of Edirne, star oil wrestler Recep Kara went directly from winning the country's most famous annual wrestling championship -- where competitors do battle smeared in olive oil -- to take part in the democracy vigil, Dogan said.