ISTANBUL - It's a barren plot on the outskirts of Istanbul, its stony ground baking under the merciless summer sun. A single sign gives a macabre clue as to the intended use of the arid patch. 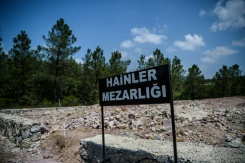 "Traitors' graveyard," say the white capital letters on the black sign, planted on two stakes into the ground.

The cemetery was created to bury Turkish rebel soldiers whose failed July 15 putsch claimed a total of 270 lives but did not manage to unseat the government of President Recep Tayyip Erdogan.

The location has been chosen with the apparent intention to offer the minimum glory in burial -- just near a construction site where a project to build a shelter for street animals is under way.

The Turkish authorities say 24 plotters were killed in the coup. Only one soldier has been buried in the graveyard so far.

Captain Mehmet Karabekir reportedly killed a local headman during the power grab attempt and his body was rejected by his family and relatives.

There is no gravestone on his tomb but just a pile of soil. Next to his, three more empty graves have been dug.

"The dead body was carried in an ambulance, with no sirens. He was laid to rest by a handful of people and then it was over," one witness told AFP.

Civilians are banned from visiting the cemetery and media are accompanied by a security official for taking any video or pictures.

Istanbul Mayor Kadir Topbas, in remarks carried by Turkish media, said the idea to create a "traitors' graveyard" had been floated during a municipal meeting.

"Those who betray this nation cannot rest in peace even in their tombs," he said.

Turkey's Religious Affairs Directorate, Diyanet, said after the putsch there would not be any funeral services or prayers for the rebel soldiers involved in the coup.

"Funeral prayers are made for the deceased by his Muslim brothers for redemption. But those people, by resorting to that action, trampled on the law not only of individuals but an entire nation.

"They did not deserve redemption or prayers of their Muslim brothers."

But Diyanet excluded soldiers or security personnel who were forced or threatened to take part in the July 15 action aimed at bringing down the government.

"This is a disrespect to the homeland, nation and the flag. This is a betrayal," a middle-aged taxi driver, Yasar, said about the graveyard.

"They deserved the label (traitor)," he said.

Not everyone agrees it is a good idea.

Campaigners and some theologists say a proper burial is a human right, whatever the deceased has done.

"This is a decision made hastily at the heat of the moment," said Necip Taylan, former lawmaker from the ruling AKP party and retired professor from faculty of theology at Marmara University.

"We know the society is hurt by what happened," he told AFP.

"But there have always been traitors. It is nothing new, you can bury in a separate spot... I don't think it is a good idea to create such a cemetery."

Turkey's once powerful military, the second largest army in NATO, has staged three coups since 1960, forced a prime minister out of power in 1997, and threatened to intervene in the 2007 presidential elections.

The cemetery also sparked storms on the social media, with one Twitter handle @ParcaInsan asking: "Kenan Evren and his team will also be buried to the Traitors' Graveyard?"

General Evren, who died in disgrace last year after being sentenced to life in prison, led the 1980 coup after ousting the government of the time.

The government is set to extend a state of emergency through November in order to prevent a resurgence in the novel coronavirus.

PARIS: France will pay tribute Wednesday to a history teacher beheaded for showing cartoons of the Prophet Mohamed in a free speech lesson in a gruesome attack that has shocked the country and prompted a government crackdown on radical Islam.

Nigeria in shock after deadly shooting of protesters

Tanzania readies for polls after years of 'hell' for opposition