BEIJING - Sometimes it seems that no one in China, from toddlers to octogenarians, ladies in swimming pools to delivery men mid-manoeuvre, is without a cellphone to hand -- and statistically it is more or less true. 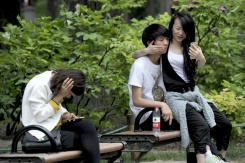 China had 1.3 billion mobile users by the end of 2015, and nearly 30 percent of them -- a swathe of humanity larger than the whole population of the United States -- were connected to the 4G network

There are almost as many mobile accounts as people in the world's most populous country.

China had 1.3 billion mobile users by the end of 2015, and nearly 30 percent of them -- a swathe of humanity larger than the whole population of the United States -- were connected to the 4G network, according to its ministry of industry and information technology.

The zoned-out zombie stare of the smartphone addict is a common sight everywhere on the increasingly mobile-addled planet, but it can seem all the more ubiquitous in China.

People retreat behind their little blue screens at any time of day or night, in dark concert halls, taking a break from the kids on the playroom floor, or in the company of a crowd of uniformed coworkers doing exactly the same thing.

Nearly everyone who accesses the internet -- a staggering 92.5 percent -- does so via their mobile, official Chinese bodies say.

As a result Chinese smartphone users spend much of their time on native apps that may have begun as knock-offs of censored foreign services but are now paving the way for the future of Western technology.

These days, Chinese users can send their grandmother a virtual red envelope of money, order a box of live scorpions or summon a beautician to the door for an in-house manicure, all without even leaving the interface of a single app, such as the monstrously popular WeChat.

The huge population of mobile users, which boomed as a result of a burgeoning middle class, represents one of the world's most important markets for companies such as Apple.

The Californian giant's profits slumped last quarter due in large part to slowing sales in Greater China -- including Hong Kong and Taiwan -- where revenues dropped 33 percent in the face of increasing competition from homegrown brands such as Oppo, Huawei and Xiaomi.

Businessman Chu Ling, 48, has come a long way since 1989, when he got his first mobile: a huge, boxy Motorola. He now communicates with colleagues and clients primarily via WeChat -- an app he barely used a year ago -- and gets a new handset every six months.

His latest is a shiny Samsung acquired in March that, unlike an iPhone, is able to hold both his work and personal SIM cards.

"Things change so much here, even within the space of a single year," he said.

"The West went through desktop computers and laptops before they hit smartphones, and so people still find those convenient, but in China, we were willing to jump directly over to doing everything by mobile. It's like we skipped a few stages."

The domestic gold price rebounded after hitting a three-week low Wednesday, with experts advising investors to sell at a profit once the price exceeds the fundamental value.