LOS ANGELES - He has worked for Oliver Stone and Steven Spielberg, playing lead roles in some of the biggest blockbusters of recent years, but you might not recognize Toby Kebbell in the street. 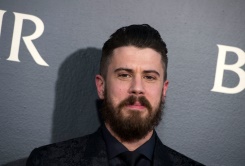 Many of the British actor's most high profile characters -- a vengeful ape, a Marvel supervillain or an eight-foot Orc chieftain -- are camouflaged by heavy make-up or computer wizardry.

The 34-year-old has been Agenor in "Wrath of the Titans," Koba in "Dawn of the Planet of the Apes," Dr Doom in "The Fantastic Four" and Durotan in "Warcraft," amassing big pay days and approving reviews when the films often haven't.

With his lead role in the hotly-anticipated remake of the 1959 epic "Ben-Hur" -- a milestone in movie history -- Kebbell's career is tipped to go stratospheric, but he's keeping his feet on the ground.

"I'll see you on the down side of things," he says at the end of an interview with AFP at a Beverly Hills hotel to discuss his latest role as Roman soldier Messala, the movie's antagonist.

He may have swapped his rented council flat in London for somewhere rather more palatial in Los Angeles, but Kebbell doesn't feel like a film star, and hopes he never will.

"I don't do social media for that exact reason, because that's a thing that really promotes you as a star. I've no interest in being important to anyone," he says.

"I have no interest in getting the best table at a restaurant. If I like the food, I'll have the take-out. It doesn't matter to me."

He is not trying to be "overly humble," he says, but doesn't want to build a pedestal from which he could one day fall.

"I know it's going to stop. It has to stop, it always does -- all those good things come to an end," he insists.

"So I'm just trying to get to a point where I've afforded a house and I can figure out something else."

Kebbell's childhood -- crammed with three older brothers and a half-sister into a small three-bedroom house England's East Midlands -- was the archetype of humble beginnings.

Born to landscape gardener Michelle and engineer Robert, his parents divorced when he was 18 months old and the family was raised in a Catholic household by his single mother.

Kebbell dropped out of school as a rebellious 15-year-old, finishing his exams at a sixth form college in Nottingham, and began attending weekly acting workshops.

His portrayal of the autistic Anthony in his first film, Shane Meadows' 2004 melodrama "Dead Man's Shoes," earned him a nomination for most promising newcomer at the British Independent Film Awards (BIFA).

He was soon working for Stone in "Alexander" and Woody Allen in "Match Point" before winning a BIFA for playing Joy Division's manager in the 2007 Ian Curtis biopic "Control."

His big Hollywood breakthrough, playing the antagonist Garsiv in Mike Newell's "Prince of Persia: Sands of Time" in 2010, was a formative, "heartbreaking" experience.

"I was given a bad guy and he was nuanced and he was interesting and I thought 'wow - how fantastic that you get this!'" he recalls.

"And that got diluted and diluted to nothing. So my ambition from then on was that if I get a bad guy again I want him to have what I know to be true, which is that people make terrible mistakes, but they're still people."

Kebbell evidently drew from this lesson for his interpretation of Messala in "Ben-Hur," portraying the Jewish prince's adoptive brother turned deadly nemesis, a man who made some poor choices but isn't evil personified.

The actor uses colorful, toilet-themed language to describe how terrified he was filming the movie's 45 mile-per-hour (72 kilometer-per-hour) chariot racing scenes, but is clearly every bit the action star.

"I'm a very physically active person. I grew up playing rugby through injuries of various types," he says, noting that the knockabout scenes in any film often come the most naturally to him.

"The thing is, 'action star' is a bad label... The belief is that you're a sell-out but I don't know anyone from my class who wouldn't be doing what I was doing if they had the chance," he says.