WASHINGTON - President Barack Obama will visit Laos next month, a first for a US president, in a trip that begins with a G20 summit in China, the White House said Thursday. 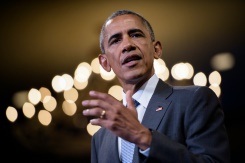 President Barack Obama will visit Laos next month, in a trip from September 2-9 that begins with a G20 summit in China

The September 2-9 tour will be the president's 11th visit to Asia since he took office in 2009.

Obama has made a "pivot" to the region a pillar of US foreign policy. Next month's swing will come about five months before the Democratic president steps down after two four-year terms.

In Laos, which this year holds the presidency of the Association of Southeast Asian Nations, Obama will participate in the US-Asean Summit and East Asia Summit from September 6 through 8.

The East Asia meeting will include the major regional powers such as China, Japan, South Korea, Australia and Russia.

"President Obama will be the first US president to visit Laos," the White House noted.

Secretary of State John Kerry has visited Laos, which has strained ties with the US, twice this year -- in January to prepare for Obama's arrival and in July for Asean meetings.

Kerry raised issues related to the devastation caused by US bombings during the Vietnam War and the future of Southeast Asia in the face of an increasingly assertive China.

Laos became the world's most-bombed country per capita from 1964 to 1973 as the United States tried to cut supplies flowing to North Vietnamese fighters during the Vietnam War.

More than two million bombs were dropped. About 30 percent did not explode and some 50,000 people died by the end of the war.

In January, Washington and Vientiane discussed beefing up a US program to clear mines and disarm unexploded devices.

Before the Laos visit, Obama will attend his last meeting of leaders of the Group of 20 economic powers, on September 4-5 in Hangzhou in eastern China.

There Obama will also hold "in-depth" meetings with Chinese President Xi Jinping, the White House said in a statement.

The leaders of the world's superpowers will discuss "a wide-range of global, regional, and bilateral issues," it said.

At the last US-China strategic and economic talks, in Beijing in June, the two sides clashed over human rights and China's expansion in the South China Sea while proclaiming cooperation on climate change.