HANOI - France and other countries should help to keep the peace in the disputed South China Sea, Vietnam's president told AFP Wednesday, as unease grows over China's increasingly muscular approach in the key waterway. 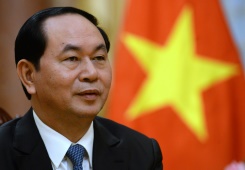 Vietnamese president Tran Dai Quang speaks during an interview with AFP at the presidential palace in Hanoi on August 24, 2016

China claims most of the sea where it has built up reefs capable of hosting military equipment, sparking ire from competing claimants, including Vietnam, and raising fears of potential armed conflict.

Speaking to AFP ahead of a visit by French leader Francois Hollande next month, Vietnam's President Tran Dai Quang said he hopes France and others will help to diffuse regional tensions in the waterway, which it calls the East Sea.

"We highly welcome the cooperation from France and other nations in the process of maintaining peace and stability in the region and the world and on the East Sea," he said, speaking from the presidential palace, the former residence of the Indochina governor during French colonial rule.

Hanoi and Beijing have traded diplomatic barbs over disputed island chains and waters in the South China Sea and in 2014 China moved a controversial oil rig into contested territory, prompting riots in Vietnam.

The strategic waterway, also claimed by the Philippines, Brunei, Malaysia and Taiwan, is rich in energy reserves, fishery resources and is a busy shipping route.

France and the United States have sent naval ships to the sea in recent months and have vowed to send more, angering Beijing.

The Vietnamese president, whose role is mostly ceremonial, said Hollande's visit would help to boost military ties between the former colonial foes, as Hanoi has rapidly increased its defence budget in the last decade.

"Several directions for cooperation will be strengthened and opened, like... ensuring security, safety and freedom of maritime and aviation," Quang said in a statement to AFP after the interview.

He added that Vietnam wants more unity in the regional 10-member Association of Southeast Asian Nations (Asean), which has failed to forge a unified front against Beijing's militarisation in the sea.

"We have been active together with countries in the Asean community to increase unity, considering this an important structure to contribute to maintaining regional peace," he said.

Last month Manila won its case against Beijing at a UN-backed tribunal in the Hague which rejected China's claims to most of the sea.

Beijing boycotted the hearing, and has refused to recognise the ruling, and Asean has sidestepped the issue, failing to comment directly on it at a meeting of ministers last month.