SINGAPORE - Singapore on Wednesday urged all pregnant women showing symptoms of fever or rashes to have themselves tested for the Zika virus after the number of cases in the city-state soared to 82. 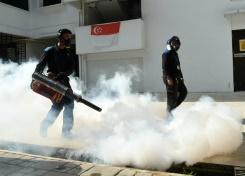 Environment agency workers stepped up efforts to eradicate mosquitoes that spread the disease, expanding a fumigation campaign centred on the "ground zero" of the outbreak, the eastern suburb of Aljunied.

As infections climbed, they blasted a district of warehouses and industrial buildings to destroy breeding sites that fuelled the outbreak, which began at a construction site housing foreign workers.

Zika, which has been detected in 58 countries including hardest-hit Brazil, causes only mild symptoms for most people, such as fever and a rash.

But in pregnant women, it can cause microcephaly, a deformation in which babies are born with abnormally small brains and heads.

The health ministry said that "all pregnant women in Singapore with symptoms of Zika -- fever and rash and other symptoms such as red eyes or joint pain" should be tested for infection.

Pregnant women with male partners who have been tested positive were also told to visit their doctors.

"We advise pregnant women to undertake strict precautions against mosquito bites and seek medical attention immediately if they become symptomatic," the ministry said in a statement late Tuesday.

The city-state has waged war on mosquitoes in response, with teams of inspectors visiting homes to check for breeding sites while pest controllers have saturated housing estates with insecticide.

Despite being one of Asia's cleanest cities with high health care standards, Singapore is a densely populated tropical island with heavy rainfall.

It has a chronic problem with dengue fever, which is spread by the same Aedes mosquito that carries the Zika virus. Mosquitoes breed in stagnant water that collects in construction sites, open space and homes.

Singapore's first reported case of Zika in May involved a man who had visited Sao Paulo in Brazil earlier in the year.

In response to the outbreak, neighbouring countries such as Malaysia, Indonesia and the Philippines have said they will monitor visitor arrivals from Singapore, while Taiwan and Australia have issued advisories warning against travel to the city-state.