HANGZHOU (CHINA) - The Group of 20 leading economies will set up a global forum to combat world industrial oversupply, a senior European Union diplomat said Monday at a summit in China. 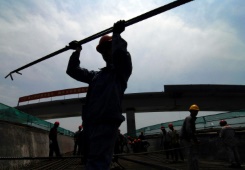 The final communique will say that "measures like subsidies are a root cause of market distortions" and a forum will be set up "to monitor the process" of cutting overcapacity, the official told reporters.

The global steel industry is assailed by huge oversupply with Chinese demand plummeting as its economic growth has slowed.

The G20 host produces half of the world's steel and it stands accused of dumping on global markets by the US and European Union.

Both sides have slapped anti-dumping duties on each others' products in various sectors.

But Chinese firms are suffering crippling losses from low steel prices too, and Beijing has repeatedly pledged to cut overcapacity in the country.

Ahead of the summit, US Treasury Secretary Jack Lew said President Barack Obama would press Beijing to limit steel overcapacity at the meeting.

"Excess capacity distorts markets and the environment, harms our workers and runs counter to our efforts to achieve strong, sustainable and balanced growth," Lew said in Washington.

China would not be named in the final document to be issued after the gathering in the eastern city of Hangzhou, the diplomat said, and had committed to participate in the forum.

"Half of members wanted this concrete deliverable," he added.

"Now of course we have to enforce and to follow up," the official added. "Politically it is an important step."