PHNOM PENH - A Cambodian opposition leader was sentenced to five months in jail on Friday in the latest face-off between the government and opposition as political tensions around challenges to Prime Minister Hun Sen's long-standing autocratic rule show no signs of easing.

Sam Sokong, a defense lawyer for Kem Sokha, deputy leader of the Cambodia National Rescue Party, said they will appeal the verdict after the trial that lasted just several hours.

"The trial conducted today did not comply with procedures'' he said.

Kem Sokha, who was not in court for the trial, was convicted of twice ignoring a summons to appear in court to answer questions related to a case involving his alleged mistress. He refused, saying the legal moves were part of the ruling party's plan to cripple the opposition.

Riot police were outside the court, and nearly 1,000 opposition supporters had gathered in front of their party headquarters, with riot police watching them from about 500m. There were no reports of violence.

The case was one of several hanging over leaders of the opposition in what is generally seen as an effort to disrupt their organising efforts ahead of local elections next June. The next general election is not until the middle of 2018, but holding power at the local level is an advantage when the national polls are held.

Before the verdict, Kem appeared before his supporters and accused the government of using the court system to stop him from speaking out and to prevent him from taking part in the elections.

A statement issued this week by the UN High Commissioner for Human Rights expressed concern "about the escalating atmosphere of intimidation of opposition politicians, their supporters, civil society, and peaceful demonstrators in Cambodia".

It noted "a host of legal charges'' faced by Kem Sokha and 29 other opposition supporters. 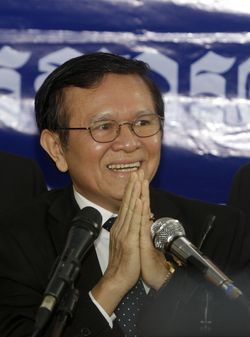 It said 14 of them had been given heavy prison sentences despite raise serious concerns about the fairness of the proceedings. "We urge the authorities to adhere strictly to international fair trial standards during the criminal proceedings.''

One victim of the legal moves on the opposition has been opposition leader Sam Rainsy, who did not return from a trip abroad last November when an old conviction for defamation was restored and his parliamentary immunity was stripped by the government's legislative majority. It had been generally assumed that the conviction, carrying a two-year prison sentence, had been lifted by a 2013 pardon which allowed Sam Rainsy to return from a previous period of self-exile. He also faces a stack of separate charges that could put him away for 17 years

Activists and non-governmental organisations, which are generally critical of the government, have come in for similar kinds of legal pressures. Physical force has also been applied. Two opposition lawmakers were beaten up by a pro-government mob last year, and the murder of a prominent social critic, Kem Ley in July, allegedly by a man to whom he owed money, is widely regarded with suspicion.

The opposition has called on its followers to turn out to protest. It has strong support in the capital and street demonstrations have traditionally been an effective form of push-back. But recent efforts to take to the streets have been thwarted by a government show of force.

Hun Sen has been Cambodia's leader for three decades. But in a general election in 2013, it seemed his grip on power was shaken when the Cambodia National Rescue Party mounted a strong challenge, winning 55 seats in the National Assembly and leaving Hun Sen's Cambodian People's Party with 68. The opposition claimed they had been cheated, and staged a boycott of parliament. Seeking to shore up his legitimacy, Hun Sen reached a political truce with them in 2014, making some minor concessions over electoral and parliamentary procedure.

But relations between the government and the opposition deteriorated last year after the opposition tried to exploit a volatile issue by accusing neighboring Vietnam, with which Hun Sen's government maintains good relations, of land encroachment. The move proved politically popular, and the government reacted by stepping up intimidation of the opposition party in the courts, which are seen as being under its influence.

Hun Sen's party was often accused of using violence or the threat of violence against opponents, but in recent years has stalked its foes mostly in the courts.