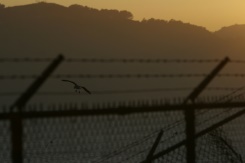 Two Florida prisons -- Gulf Correctional and Mayo Correctional -- were placed on lockdown following "disturbances," according to the Miami Herald newspaper.

The state's corrections department announced Friday the cancellation of weekend visits at the Holmes facility and the Gulf Correctional Institution Annex, without providing details.

Elsewhere in the US, activist groups took to social media and called for peaceful protests to improve the lives and working conditions of prisoners.

His group is among several leading the protest movement.

Friday's events occurred on the anniversary of the historic September 9, 1971 rebellion in which inmates took over and shut down upstate New York's Attica prison, a bloody uprising that prompted four days of intense negotiations.

According to the Free Alabama Movement group, prisoners were also striking in Alabama, Texas and South Carolina facilities.

The US prison population has hit record levels, with more than 2.2 million individuals behind bars, including the mentally ill and petty criminals.