WASHINGTON - The United States on Tuesday announced it had reached a record $38 billion 10-year military aid deal with Israel, despite increased disagreement over the Middle East peace process. 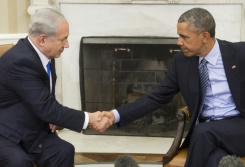 US President Barack Obama(R) and Israeli Prime Minister Benjamin Netanyahu shake hands during a meeting in the Oval Office of the White House in Washington, DC, November 9, 2015

The State Department said the pact will be signed on Wednesday and "constitutes the single largest pledge of bilateral military assistance in US history."

A senior Israeli official confirmed that the deal would be for $38 billion over 10 years, up from the $3.1 billion per year the United States pays to its key ally.

Washington has warned that Prime Minister Benjamin Netanyahu's policies -- along with Palestinian violence -- are putting at risk hopes of an eventual peace deal.

Just last month, the White House toughened the language it uses to condemn what it sees as a "dramatic acceleration" in Israeli building in the West Bank and East Jerusalem.

Far from backing down, Netanyahu stepped up his rhetoric.

In a video address last week he claimed that Palestinian critics of the settlements support the "ethnic cleansing" of Jews, comments Washington deemed "inappropriate."

But Israel remains the United States' number one ally in the region and the biggest single recipient of US military aid, while also a big customer for US arms exports.

The new deal will last from 2019 through 2028. US and Israeli officials said it would be signed on Wednesday in the Treaty Room of the State Department in Washington.

The current agreement expires in 2018 and Netanyahu's government had earlier reportedly sought as much as $5 billion per year over a decade.

The Israeli premier had called for an increase in part because of the nuclear deal with Israel's arch-foe Iran and the lifting of sanctions that went with it.

Beyond the threat from Iran itself, the Israeli leader says the lifting of sanctions will allow Tehran to further back Israeli enemies in the region, such as Hezbollah.

Relations between Netanyahu and Obama have been frosty, but both leaders have had an interest in putting aside their disagreements and reaching a deal.

Obama has sought to demonstrate his support for Israel's security after facing criticism from Republicans at home who accuse him of falling short.

"The next decade of American military support for Israel is spelled out in a memorandum of understanding our countries have been discussing in recent months," US ambassador to Israel Dan Shapiro said this week.

He quoted US National Security Advisor Susan Rice as saying "the new agreement with Israel... will be the single largest military assistance package -- with any country -- in American history."

Israel relies heavily on US defense aid. Its total defense budget amounts to some $16 billion, excluding the US aid.

The country is "the largest cumulative recipient of US foreign assistance since World War II," according to a US congressional research report from June 2015.

Netanyahu has also faced domestic criticism, with his political opponents accusing him of holding up negotiations while criticizing Obama's Iran deal.

He has defended himself against critics who accused him of damaging relations with Israel's most important ally.

But relations have been sour since March 2015, when he appeared before the US Congress to lobby against the Iran deal that Obama was pushing for.

"Instead of receiving $4.5 billion a year as was expected and feasible a year ago, immediately after signing the deal in Vienna, Israel will get $3.8," Barak said.

The current $3.1 billion annually does not include additional US spending on Israeli missile defense.

The Obama administration has reportedly sought to have future missile defense spending included in the overall pact as well as a commitment from Israel not to approach the US Congress for further such financing.

The United States has also reportedly sought to phase out Israel being allowed to spend part of the money with its own defense industry instead of from US firms.