WASHINGTON - The United States is helping Southeast Asian allies do more to prevent the Islamic State group from gaining a greater foothold in the area, senior Pentagon officials said Thursday. 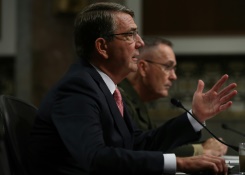 US Secretary of Defence Ashton Carter (L) and Chairman of the Joint Chiefs of Staff Joe Dunford testify before the Senate Armed Services Committee on September 22, 2016

The IS has already established a presence in several countries across the region including Malaysia, Indonesia, Singapore and the Philippines, and authorities worry both about domestic attacks and nationals traveling to join the jihadists in Iraq and Syria.

General Joe Dunford, chairman of the Joint Chiefs of Staff, told the Senate Armed Services Committee that the United States is helping partners share intelligence and information on extremist groups.

"We're trying to work with them to develop a framework within which they can share information, share intelligence," Dunford testified at the committee hearing.

"We are absolutely working close with our partners, and frankly, the limit of the support we provide is often what they are willing to accept politically," he added.

Defence Secretary Ashton Carter said he was meeting with regional defence ministers next week at a summit in Hawaii and IS would be one subject of discussion.

"Southeast Asia clearly is a place (IS aspires) to spreading," Carter said.

Islamic militants in the Philippines on Thursday freed an Indonesian sailor abducted at sea, days after the gunmen released a Norwegian captive and three other Indonesians.

The group, the Abu Sayyaf, is a loose network of a militants that has in recent years pledged allegiance to IS, though analysts say the group is mainly focused on a lucrative kidnapping business rather than religious ideology.

The Philippines's new president, Rodrigo Duterte, last week called for the small number of US military advisers to leave the southern part of the country, though top officials quickly moved to downplay his comments.

In Indonesia, the world's most populous Muslim-majority country, there has been a surge in attacks and attempted attacks this year due to the growing influence of IS.

According to Dunford, more than 1,000 Indonesians have left to join IS in Iraq and Syria, and hundreds from the Philippines.