Climate treaty ratified in race against the clock
World

Climate treaty ratified in race against the clock 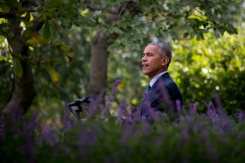 US President Barack Obama speaks about the Paris Agreement from the Rose Garden of the White House in Washington, DC, October 5, 2016

"A turning point for the planet," said US President Barack Obama.

"A defining moment for the global economy," enthused Paul Polman, CEO of Unilever and Chairman of the World Business Council for Sustainable Development.

But the cold, hard reality of what is needed to fulfil the Paris Agreement's pledges will soon bite, experts warned.

Its accelerated entry into force was driven by many things, including the prospect of Republican Party candidate Donald Trump -- who has described global warming as a hoax perpetrated by the Chinese -- sitting in the White House.

The rapid, joint ratification by China and the United States also set an example hard to ignore.

But the main impetus for locking in the deal was clearly the growing sense of urgency about the looming threat of climate change.

"Time is absolutely of the essence," said Jennifer Morgan, Executive Director of Greenpeace International. "The question is not 'whether', it is 'how fast'."

Every month so far this year has set a temperature record, and 2016 is on track to supplant 2015 as the hottest year ever registered.

Scientists have recently forecast that average global temperatures -- already one degree Celsius (1.8 degrees Fahrenheit) above the pre-industrial era benchmark -- could sail past 1.5 C (2.7 F) within a decade, and 2.0 C (3.6 F) by mid-century.

A maelstrom of superstorms fuelled by rising seas, deadly floods, and drought prompted the world's nations to lower the threshold for dangerous warming in the Paris pact to "well below" 2.0 C.

Reaching that target will require a breakneck, wholesale shift across the globe away from fossil fuels towards clean sources of energy.

Even that will not be enough: we will have to learn how to suck carbon out of the air, say scientists.

The Paris accord's early validation comes just in time to take centre stage at high-level UN talks in Marrakesh next month tasked with translating its planet-saving vision into policy.

It could also accelerate the process.

"This shifts the focus to implementation and strengthening the commitments under the agreement," said Alden Meyer, a veteran climate analyst at the Washington-based Union for Concerned Scientists.

Countries have informally set a 2018 target for hammering out more than 100 concrete rules and procedures embedded in the climate pact -- some of them highly contentious.

Originally, the agreement left open a four-year window for that process.

"Many details need to be ironed out before implementation can begin," said Harjeet Singh, head of climate change for ActionAid.

They include rules for reporting and verification of emissions cuts, how to disburse hundreds of billions of dollars to climate-vulnerable developing nations, and the establishment of new market mechanisms.

Even more important, 2018 is shaping up to be a crucial "political moment" when countries will feel pressure to revise and deepen voluntary pledges for slashing carbon pollution.

At their current level, these so-called "nationally determined contributions" -- which don't kick in until 2020 -- fall woefully short of the target, and would result in an unlivable 3.0 C (5.4 F) planet by century's end.

Bolstered by a special report from the UN's climate science panel, to be completed by mid-2018, the world's major greenhouse gas emitters will also be expected to deliver detailed national plans, or "pathways", for economic transformation through 2050.

"If you are going to achieve the objectives in Paris, you need a north star that gives you the direction of travel," said Meyer, adding that the United States, Germany and Canada have taken the lead on this.

That north star will likewise be a visible to corporations and business leaders, who realise that they ignore it at their peril.

The new treaty "sends an unmistakable signal to business and investors that the global transition to a low-carbon economy is urgent, inevitable, and accelerating faster than we ever believed possible," Unilever's Polman said in a statement.

A man and a woman linked to a major drug bust in the northern province of Phayao in 2018 have been arrested, Office of the Narcotics Suppression Board (ONCB) secretary-general Niyom Termsrisuk said on Wednesday.