As China rises, top-selling painter looks to his roots
World

As China rises, top-selling painter looks to his roots

BEIJING - Blue-chip Chinese artist Zeng Fanzhi built up a lucrative career by looking to the West for inspiration and buyers, but a new retrospective in Beijing reveals an unlikely turn back towards China's own aesthetics and traditions. 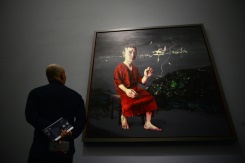 It is a story increasingly common in the world's second largest economy, where a growing disillusionment with material wealth has sent a generation in search of a heritage lost.

"In the beginning, you feel happy that you've attained a certain kind of recognition, and are sold for a very high price, but as time goes on, it vexes you," he said.

"People badmouth you, and the success influences your emotional state and creative process," he added.

In 2013, his painting "The Last Supper" sold for $23.3 million at Sotheby's in Hong Kong, at the time the most expensive contemporary Asian work ever sold at auction.

It was one of his "Mask" series, paintings whose empty-eyed, white-masked figures spoke of the psychological tensions lurking in China as the political idealism of the 1980s gave way to the 1990s' single-minded focus on rapid economic growth.

The media attention paid to just one period of his nearly three decade-long career left him feeling pigeon-holed, Zeng told AFP, following the opening of a retrospective of his work this month at Beijing's Ullens Centre for Contemporary Art (UCCA).

The masks became a brand, he said, an easily commodified image that reinforced Western preconceptions of China and were used by auction houses and art publications to boost their own sales.

Zeng rode the wave of China's development, rising to fame from humble beginnings at a time when the country had no significant art market of its own.

Now that its art scene is well-established, he has lost the need to seek validation and inspiration from the West, choosing to look instead to his own roots, he said.

"In the '80s, we were so starved for outside information; we wanted so much to understand the world and know about Western art," he said, explaining his early obsession with artists like Paul Cezanne, Willem de Kooning and Lucian Freud.

He said: "But nowadays, there's such an overwhelming amount of information -- it's cognitive overload. I have to close myself off and look inward to maintain my sense of self."

Zeng's new show "Parcours: Zeng Fanzhi" exhibits more than 60 works from each of his wildly different major artistic stages, many for the first time on the mainland.

He hopes it will provide a more complete picture of his continuous process of reinvention.

The canvases are a stark contrast to his latest series: understated, black-and-white works on paper inspired by Song dynasty paintings.

They arise out of Zeng's 2008 shift towards an exploration of paper itself, finding inspiration for his brushwork in the subtle variations of its grain – a technique inspired by Chinese artistic philosophies.

"As you grow older, your whole aesthetic sense and preferences change," said Zeng, who has started collecting traditional Chinese art and designing literati gardens like the one outside his studio, which features jagged scholar's rocks, stone lions and a koi pond.

Despite Zeng's philosophical shift, UCCA director Philip Tinari admitted that it was impossible for the show to escape the shadow of his sales records: "He has probably created more financial value than all but a very few artists alive today."

Nevertheless, "there's an honesty about this work that's not immediately apparent," Tinari said.

Zeng's output is testament to a key moment in China's artistic engagement with the outside world, when his generation found real inspiration and meaning in the Western idea of art as a tool of fomenting social change, he explained.

In the recent paper series, Tinari said he saw Zeng "pulling further and further back from the day-to-day of reality" as he grew older and wealthier, a change that echoes China's growing global status.

As China becomes richer and more powerful, Tinari said, its artists do "not necessarily need to make work that narrates the Chinese situation, or that explains the social and political problems and questions of the nation".

The change, he said, is a sign that China, along with its art market, is maturing.

"The world is only ready to hear about art for art's sake from people who come from a certain place on the geopolitical continuum."