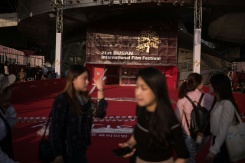 "Sometimes it feels as if we're moving back to the era before 1987," the investigative journalist and documentary filmmaker said, referring to the decades of repressive military rule that preceded South Korea's first democratic presidential election.

No stranger to butting heads with officialdom, Choi is currently struggling to secure distribution for his latest film, "Spy Nation" -- a documentary that exposes abuses by South Korea's National Intelligence Service (NIS).

It focuses on the high-profile case of an ethnic Chinese North Korean defector, Yu Woo-Sung, who fled to the South in 2004.

In 2013, the NIS arrested Yu on what were later shown to be trumped up charges of spying for Pyongyang. The film lists many others who were arrested, beaten and even executed on false spying charges over the decades.

"Spy Nation" has won local festival awards, but challenging the powerful NIS is a very sensitive move in South Korea, and finding cinemas that will screen the film hasn't been easy.

"The multiplex theatres don't want to get on the government's bad side by eagerly opening their screens to us," Choi said.

"And even if they do show our movie, they will probably limit the number of screenings," he added.

Relations between the government and the media have taken a tangible downturn under current President Park Geun-Hye, whose administration has wielded a strict defamation law that carries prison sentences of up to five years.

The annual Busan International Film Festival -- Asia's biggest movie showcase which opened last week -- is still recovering from a bitter row triggered by official opposition to the 2014 screening of a documentary that criticised the government's handling of the Sewol ferry disaster.

In it's latest World Press Freedom index published in April, the media watchdog Reporters Without Borders (RSF) ranked South Korea 70th in the world -- down 10 places from 2015.

"The government has displayed a growing inability to tolerate criticism and its meddling in the already polarised media threatens their independence," the watchdog concluded.

The government firmly rejects that finding.

"I absolutely disagree with what RSF says about press freedom in this country," said Han Min-Ho director general of the media policy bureau at the Ministry of Culture.

"The news media enjoys freedom of expression to the degree that its attacks against the president sometimes verge on cruelty", Han told AFP.

Choi currently works as a producer for Newstapa, an online news website that presents watchdog journalism in video form.

Newstapa is run by the Korea Center for Investigative Journalism (KCIJ) -- the country's first non-profit online investigative reporting organisation that was set up in 2012 by a dozen TV journalists who had been dismissed for leading strikes.

"We don't receive any commercials to remain free from any outside pressure", Choi said. The agency is funded entirely by public donations.

Choi joined Newstapa after being fired from broadcaster MBC TV in the wake of a journalist strike against a political appointee being parachuted to become the president of MBC.

While at MBC, Choi had headed a 2005 investigation by the broadcaster's "PD Notebook" into Hwang Woo-Suk, who was lauded as the "pride of Korea" after claiming to have derived stem-cell lines from cloned human embryos -- a world first.

Choi's investigation showed that Hwang's research was fraudulent and riddled with ethical lapses which he exposed in a two-part programme.

Although Hwang was eventually convicted of embezzlement, bioethical violations and given a two-year suspended prison sentence, Choi's programme initially triggered an aggressive backlash.

Hwang's supporters staged protests outside the TV station and many women volunteered to donate their own eggs for Hwang's research.

"I was reviled as some sort of public enemy... and my colleagues' children faced harassment at school", he said.

Choi continued to court controversy at MBC with a four-part programme in 2010 that was highly critical of then-president Lee Myung-Bak's multi-billion dollar plan to revitalise four major South Korean rivers.

After that project he was sidelined for a while, before his eventual dismissal following the strike over editorial independence.