MOSCOW - Former Soviet leader Mikhail Gorbachev warned on Monday that the world has reached a "dangerous point" as tensions between Russia and the United States spike over the Syria conflict. 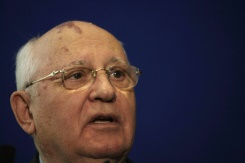 Relations between Moscow and Washington -- already at their lowest since the Cold War over the Ukraine conflict -- have soured further in recent days as the United States pulled the plug on Syria talks and accused Russia of hacking attacks.

The Kremlin has suspended a series of nuclear pacts, including a symbolic cooperation deal to cut stocks of weapons-grade plutonium.

"I don't want to give any concrete prescriptions but I do want to say that this needs to stop. We need to renew dialogue. Stopping it was the biggest mistake."

As the last leader of the Soviet Union, Gorbachev oversaw an easing of decades of tensions with the West that helped to end the Cold War.

He signed several landmark nuclear disarmament deals with Washington aimed at defusing the standoff between the two superpowers.

"It is necessary to return to the main priorities. These are nuclear disarmament, the fight against terrorism, the prevention of an environmental disaster," he said.

"Compared to these challenges, all the rest slips into the background."