By 2100, storms will unleash more floods in New York
World

By 2100, storms will unleash more floods in New York

NEW YORK - Extreme floods unleashed by massive storms on the scale of Hurricane Sandy in 2012 are expected to rise sharply in the coming decades in the New York City area, researchers said Monday. 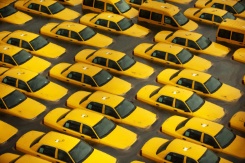 Taxis sit in a flooded lot after Hurricane Sandy in 2012 in Hoboken, New Jersey

Using computer models to combine sea level rise and storm surge -- flooding brought on by a cyclone -- researchers found that such events will become far more common in the years to come.

"The worst-case scenario has the frequency increasing by 17 times by the year 2100," said the study in the October 10 edition of the Proceedings of the National Academy of Sciences.

At a minimum, such storms will become three to four times more frequent, predicted the study by researchers at Princeton and Rutgers universities and the Woods Hole Oceanographic Institution.

Sandy unleashed nine-foot (three-meter) floods across coastal New York and New Jersey, and is considered the second costliest hurricane in US history, having caused an estimated $71 billion in damage and 157 deaths. The costliest was Katrina in 2005.

Under the sea level rise conditions of the year 2000, storms like Sandy would have happened around every 400 years, said the study.

But sea level rise is expected to mount significantly over the coming decades, and storms may also become more extreme in a warming world.

"Engineering-wise we've always considered sea level and climate as static. But now we need to account for the change over time," said lead author Ning Lin, a Princeton assistant professor of civil and environmental engineering.

"If you don't account for rising sea level and possible change in storm activity, you're underestimating future flood risk."

The study's methodology could also be applied to other coastal cities.

"The grand answer is that things are going to get worse by 2100," said co-author Benjamin Horton, professor of marine and coastal sciences at Rutgers.

"If nothing changes with hurricanes, sea-level rise alone will increase the frequency of Sandy-like events by 2100."

Virus mutations down to chance, in more ways than one

Outrage after troops protecting US Capitol forced to sleep in garage